Analysis: Sunday's protest succeeded in uniting all haredi factions, but its participants do know that the IDF draft law has already been approved.

The ultra-Orthodox protests are usually directed outward: Against the Supreme Court, against the government, against the municipality, against seculars who dared drive through a religious street on Shabbat. Sunday's protest was directed entirely inwards: Into the haredi sector.

The protest's accomplishment is that it united all factions, all Hasidic movements, all rabbis and all ethnic groups around one struggle. Ashkenazim with Sephardim, Lithuanians with Hasidim, Gafni with Litzman, Shteinmans with Auerbachs: The internal animosities, which have greatly weakened the sector's power in recent years, were pushed aside, if only for one day.

The protest's weakness is in its abortiveness. Everyone who was present at the plaza of Jerusalem's International Convention Center on Sunday knows that in practice, the law in its current format has been approved. The crying is over spilled milk.

There were not half a million people at the protest area on Sunday. The police based their estimates on the number of cellular phones, which reached 350,000. But the police commanders forgot that almost every haredi man has two active phones in his pocket – a kosher phone for the rabbis, and a smartphone for the Internet.

Rabbi Ovadia Yosef's funeral procession several months ago had a far higher turn-out, not just among the haredim, but also moderate religious, traditional and secular Jews who mourned his death. I am willing to take a chance and say that the number of participants at the haredi protest against the Supreme Court in 1999 was not much smaller than the number of participants on Sunday. That protest was nicknamed "the protest of half a million," although it had about half of that. Sunday's protest was called "the protest of the million," although it had a quarter of that.

(The exaggerated numbers are not a haredi invention. It's the norm established by the leftwing in its protests, imitated by the right and adopted by everyone else. There's probably no way back.)

Nonetheless, Sunday's quantity was impressive, as were the discipline, the restraint and the order. From an organizational perspective, the protest was a great success. It is necessary to compliment the police, an organization which has taken quite a few beatings recently, for this. The Jerusalem District Police learned a lesson from Ovadia's funeral, which was held in the crowded heart of the haredi area, and only through a miracle did not end in a disaster. The decision to hold the protest on the wide, open roads at the entrance to the city gave the protestors space to breathe. 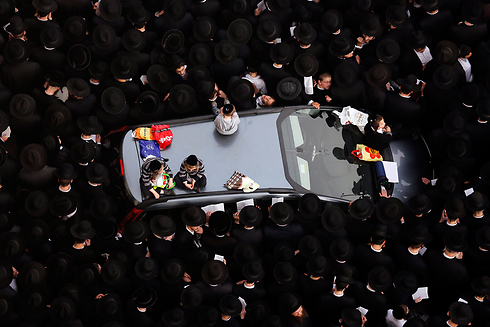 Each protestor received a folded booklet, which contained the texts delivered during the protest. There were Psalms verses, pleas and prayers – and not a single word about the draft law, about Lapid or about Netanyahu. The rabbis' cries were conveyed through the huge loudspeakers with high-quality acoustics, and the audience, comprised overwhelmingly of young men, rocked backwards and forward, left and right, and intoned "Amen".

"Even Ashkenazim are praying in the Sephardic style," a senior haredi official told me excitedly.

The slogans prepared in advance referred to "decrees of destruction" and vowed "not under any circumstances." Loaded words indeed, but the atmosphere on the street was generally one of reconciliation, and most were in good spirits.

"Netanyahu," I was told by Eliyahu from Netivot, "will want to reach an agreement with the Arabs. The Americans will force him. The Bayit Yehudi party will come to us and say, 'We must fight for Jerusalem,' and we will say, 'That's very nice. When you sat in the government with Lapid you didn't call us.' And then Bibi will throw Bennett out and invite us and the Labor Party in, and the law will be annulled."

"No," said another person. "It's the end of the historic alliance between the haredim and the right."

During the protest, groups of young men began to dance. The loudspeakers rang, and they sang and danced Hasidic dances, circle dances, dances for two. Powerfully, and with raging enthusiasm. For this too, is a way of protesting the enlistment bill that would see them in a different kind of uniform.

I was approached by Shimon, a red-bearded and blue-eyed Lithuanian from Jerusalem. He is convinced that the law will generate a counter reaction. Young haredi men will be discouraged from going to study in colleges, and those obliged to enlist will not go to the frameworks offered by the army or to civil service. They will all go back home, into the woodwork. "It's the end of the haredi campus (at the Kiryat Ono College)," he said. "You've seen the signs against the students."

He was not alone in whishing for this. "Lapid," one haredi journalist told me, "will achieve the exact opposite of what he pretends to achieve."

"Our pride is in our unity," said Jerusalem Deputy Mayor Yossi Deutsch, who coordinated the organization of the protest. I met him at the police's command post, where haredi politicians were embracing police officers. Deutsch said the first discussion about the protest had been held last Tuesday. Within four days it was all organized, even with a Shabbat in the middle. "This time," he said, "there were no issues of ego. No one argued over who would sit next to whom, who would sign first, who would blow the shofar first."

What did you want to express? I asked. He took a deep breath. "We came," he said, "to say to Bibi: You can decide on whichever sanctions you want. We only obey our rabbis."

The rabbis live in a world of their own, I said. They are detached from reality.

That is one of the big questions the protest leaves behind: What do the sector's young members think? Are they united in opposition to coming out from behind the walls of the ghetto? Do they blindly follow their rabbis?

There is no doubt that they came to protest out of their own free will, that they are devotees of the sector and partners in its battles. But many of them are finding it difficult to come to terms with the lifestyle imposed on them, with the factionalism, with the poverty, with the faux culture that talks about a society of learning but in fact perpetuates a society of idleness.

So much potential, so little blessing for themselves, for society.

The sounds of pop gun caps could be heard in the plaza. When evening fell, a firework lit up the cloud of haze over Givat Shaul. "When the month of Adar starts we increase our joy," a friendly rabbi from Hadera explained to me. A cry, a prayer and joy: On Sunday, in Jerusalem, we saw the whole package.