A youth tour guide says he was repeatedly harassed at the Auschwitz-Birkenau concentration camp by Polish guards, who demanded that he and the teens he was escorting stop singing, even when they sang quietly and in a distant part of the camp. It ended in a violent arrest and high fine. Rabbi Rafi Ostroff, a veteran youth guide in Poland, visited the former Nazi concentration camp last Friday with training groups of the World Bnei Akiva movement from South Africa and Australia.
No Joke
Facebook page ridicules Israelis' selfies at Auschwitz
Ynetnews
Page called 'with my babes at Auschwitz' causes stir on Israeli social media, presents selfies teenagers post online while on Holocaust memorial trip to Poland death camps.
Facebook page ridicules Israelis' selfies at Auschwitz
"Inside the Auschwitz I gas chambers, I began singing quietly the song I always sing there, 'Venikiti Damam' ('And I cleaned their blood')," he tells Ynet. "One of the female guards approached me and demanded that I stop singing." Rabbi Ostroff says he was surprised, as it was the first time he had been asked to stop singing and Jewish youth groups always sing memorial and spiritual songs at the site, but he stopped singing to as not to create a conflict. "When we moved to the other room, one of the crematoria, the group started singing 'Ani Ma'amin' ('I believe')," he adds. "Suddenly another guard came along and barked at me, 'Tell your guys to shut up.' "I said to him gently, 'It will end in 20 seconds and then I'll take them out.' But he just said, 'No, now!' He spoke to me as if I were a prisoner in his camp." 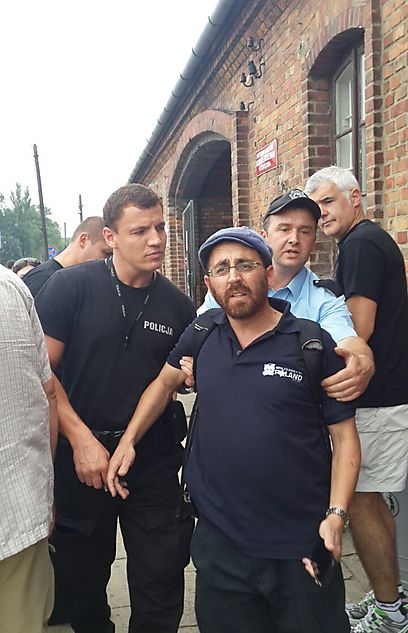 Rabbi Ostroff and his students say they felt they were being persecuted throughout their entire visit. "The guys are very sensitive during these visits, and they felt angry and hurt. Some of them are grandchildren of Auschwitz survivors who shared their families' stories at the site."

But the saga did not end there. "In Birkenau I began singing with the microphone again, as I always do. And again they asked me to stop, and I stopped immediately. Later on, at a more distant part of the camp, my group stood in rows and began singing 'Ani Ma'amin' again, a song Jews sang on their way to the gas chambers.

"A guard arrived and began chasing us with his car, shouting at us to stop singing. The teens ignored him and went on, and so did I. In another cabin we sang 'Am Yisrael Chai' ('the Jewish people live').

"It should be noted that we did what Israeli groups do all year when they visit the place, and there are no signs forbidding it," Rabbi Ostroff clarifies.

"When we came out of the cabin, two guards began shouting at me, 'Are you the group's guide? Shut them up.' I replied that I had no control over the situation, and that we were going to leave in a few seconds."

When they went out, Rabbi Ostroff says, he was violently attacked by the guards, who demanded that he give them his passport.

"I refused," he says. "They are guards at a camp, not police. I asked them what they needed it for, and they said they wanted to 'register me.' I agreed to give them the name of the school I was guiding, but they began using violence against me. They detained me next to the students and wouldn't let me go, and at the same time they called the Polish police." According to Rabbi Ostroff, who also serves as chairman of the Religious Council in Gush Etzion, "there was a group of adults there, including Holocaust survivors, who were in shock." When the Polish police arrived, the officers did not say a word to Rabbi Ostroff or any of his Polish escorts. "When they finally turned to me, after speaking to the guards, they immediately attacked me: 'Haven’t you issued a passport?' "I told them I wasn't even sure that I had my passport on me, and they replied that it was a criminal offense and arrested me without even listening to what I had to say. They put me into a room and informed me that they were fining me for failing to present a passport and for 'violating the site's rules, in other words – the singing." The rabbi received a fine of 1,000 zloty, about $320. "The police clarified that if I failed to pay the fine immediately, I would have to spend 24 hours in detention. As there were three hours left before Shabbat, and we had a two-hour drive to Krakow ahead of us, I accepted all their demands because I couldn't leave the group alone. We gave them the money, I signed what I was asked to sign, and we left for Krakow."

Rabbi Ostroff clarifies that he would have rather been detained for 24 hours, but he was responsible for the group waiting for him.

"It's unthinkable that the people of what is known as the Auschwitz Museum would be so insensitive to Jewish groups," he says. "It's unthinkable that they would be intolerant towards Jews singing the songs their grandparents sang on their way to the gas chambers. It's unthinkable that a guard would shout at us as if we were prisoners in a camp and he were the kapo. That's exactly how we felt, and the students were hurt by it. "This is the first time this happens," he notes. "The attitude towards Jewish groups is worsening all the time, and each time there are new restrictions. I'm afraid that next time they will forbid visitors to wave flags of Israel, claiming that it offends other ethnic groups. "The people of the museum here are trying to convey that there is no difference between the Jewish groups and other ethnic groups that arrive at the site, as if it is not the Jewish people's story. But what can we do that 95% of the prisoners murdered here were Jews?" The rabbi adds that "there are guides who arrive in Poland and say that all the Polish people are anti-Semites who hate us. I, on the other hand, try to explain to my students all week long that there are good Poles and that they are not all bad. I took them to the grave of a Polish family, some of the Righteous Among the Nations. "The entire education I have been trying to instill, that there is no black and white and that reality is complicated, has been ruined."

The museum's administration said in response that the group had behaved inappropriately at the memorial site.

"It created a problem for other guides and visitors who were at the site at the same time. Other visitors were disturbed even at a sensitive place like the crematorium, after the group delayed others who wanted to go in," the statement read. The museum accused the group of ignoring requests to keep quiet at the Auschwitz II-Birkenau compound. "Several requests from security remained unanswered. The head of the delegation refused to provide his name or other documents. That's the reason why the police were called, asked for the documents and fined him for disrupting public order. No one was arrested." The museum added that the incident had nothing to do with the songs the group sang. "There are different ways of commemoration, but they can't bother other visitors. Such awful behavior sparks judgmental comments from other visitors. "And yet, we would like to stress that the majority of visitors – including groups from Israel – know how to behave in a way befitting the memorial site. The entire incident was recorded and analyzed, and the security personnel's reaction was appropriate in light of the situation."

Tali Farkash contributed to this report.