Jerusalem is a time-bomb, and Israel can't hear the ticking

Analysis: Israelis are fooling themselves if they think that the unrest in the Palestinian side, primarily over the Temple Mount, is just going to go away.

How close did we come last week to witnessing a real fire break out inside the Al-Aqsa Mosque during the riots on the Temple Mount? Does anyone here even care at all? Not one bit. Oh, how sweet a winter slumber we are having.

The al-Murabitun – those few dozen Palestinians, including some Israeli Arab members of the Islamic Movement, who have made themselves paid guardians of the Temple Mount against what they call "the Jewish takeover" – threw Molotov cocktails from inside the mosque. Israeli police responded with riot-dispersal means. Sparks flew everywhere. All that remained was for the carpets to catch alight, the mosque to go up in flames and the entire Muslim world – Shias and Sunnis as one – to forget their differences and come running.

And here, on our side, they're playing it down. The unrest on the Temple Mount is subsiding, they tell us. Jews made pilgrimages to Jerusalem over the Sukkot holiday, so tensions rose somewhat. That's all. And because more Jews came to Jerusalem over the holiday, the police ruled that Muslims under the age of 50 would not be allowed on the Temple Mount during the visiting hours of the Jews. Yes, it's true, members of the Temple Mount Faithful showed up too, there was some provocation, there were a few Knesset members there, they sang Hatikva a little alongside the mosque – but the status quo remained unchanged.

It's all make-believe. We're fooling ourselves. This "status quo," which slowly moves all the time so as not to upset the extreme right, could end up not only giving rise to demonstrations in Jerusalem, but also to the toppling from his throne of the Jordanian king. And he is angry therefore with the government of Israel, which is playing with fire on the Temple Mount, but pretending that everything is under control. 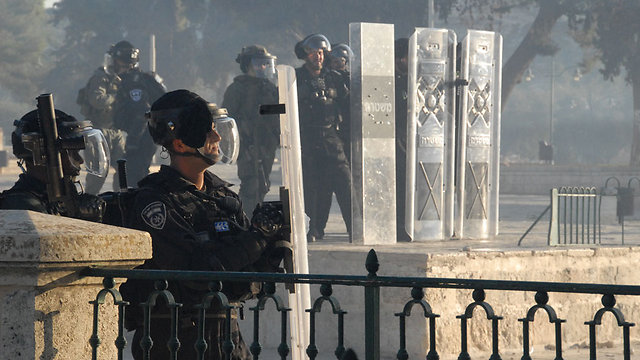 On Wednesday, Prime Minister Benjamin Netanyahu responded to the Jordanian king by saying that Israel hasn't made any changes on the Temple Mount. That's true. Netanyahu hasn't bowed to the pressure he is under from Knesset members and ministers on the right of his coalition. But the status quo is being gnawed away at from the bottom, in small chunks.

The extreme right, for example, demanded the opening of another gate to the Temple Mount during the Sukkot holiday. The al-Murabitun, in turn, stockpiled Molotov cocktails and rocks and prepared for the Jewish takeover. The police, and rightly so from their perspective, decided to dismantle this dangerous set-up and entered the Temple Mount in the evening, when the Jews were no longer there, to restore order. This restoring of order could have ignited the entire Middle East.

If the main focal point of the mini-intifada in Jerusalem is the Temple Mount area, the second focal point is the Shuafat ridge, along the Light Rail line, with the riots spilling over into villages and neighborhoods around the capital. This area was set ablaze after the murder of Arab teen Mohammed Abu Khdeir. And throughout Operation Protective Edge, the fires were fanned by Hamas members in an effort to open a second front against Israel, to ease the pressure somewhat on the Gaza Strip.

Relative calm returned to the West Bank after Protective Edge, but the area of Jerusalem remained ablaze. The police, who made a concerted effort, only upped the friction. Over the past six weeks, around 120 people have been arrested in the neighborhood of Issawiya alone. Street violence has increased. Destruction of property has become a daily occurrence – and not only of train stations; the French Hill gas station was torched, and there've been dozens more incidents of ongoing clashes with the security forces.

This kind of anarchy also gives rise to individual terrorists, like the murderer from Silwan who on Wednesday ran down nine civilians who had alighted from Jerusalem's Light Rail, killing three-month-old Chaya Zissel Braun. Was this lone terrorist influenced or not by the incitement and calls issued by Hamas in Gaza encouraging a full-blown intifada in the West Bank to protect the Temple Mount? This may be an important academic question. But when the mood gets so hot, it's never difficult to find volunteers for terror attacks of this kind.

On the way to Cairo

Meanwhile, the mini-intifada has led to the consolidation of all the Palestinian groups active on the Temple Mount – from members of the Islamic Movement of Israel, through to the East Jerusalem Hamas activists, members of the so-called Liberation Party (an Islamic group that called for the establishment of Islamic caliphates years before the birth of Islamic State) Fatah activists, and Waqf officials. The Temple Mount has become the only place where Hamas, Israeli Arabs and representatives of the Palestinian Authority link arms on the same side of the divide.

Here, on our side, however, no one is getting too excited. As far as we're concerned, there are no signs on the ground that foretell of a large security crisis in the West Bank just around the corner. Despite the absolute political disconnect, there's been a marked improvement in economic ties, and coordination with the Palestinian security services has also improved, with more information being conveyed from one side to the other.

True, Israel refused to allow them additional light arms as they requested; on the other hand, it did allow the Palestinian security services to equip themselves with riot-dispersal means. Israel allows them to operate in areas like H-2 in Hebron; the Palestinian security services notch up successes when it comes to blocking terror funding and apprehending weapons manufacturers; so what do we have to complain about?

They even managed to thwart Hamas preparations for demonstrations in light of the riots in Jerusalem. Thus, say Israeli security officials, aside from the villages around Jerusalem and neighborhoods in Jerusalem, the West Bank after Protective Edge is quiet – so quiet that it even appears unnatural.

It isn't quiet; it's despair. The PA no longer has faith in anyone or anything – not in the old Kerry initiative, and not in the new one either. Israel and the United States have deceived them, they charge. Mahmoud Abbas and his people are acting like they have nothing more to lose.

At the end of the month, they are heading to Cairo for talks with Egypt and Israel on a permanent settlement in the Gaza Strip. The Palestinian delegation knows in advance that it will not get Israel's written consent for any move that plays into the hands of Hamas in any shape or form. It has already internalized the fact that the restoration of Gaza will go ahead in keeping with the parameters dictated by Israel – without signatures on any binding document. As for a seaport or airport – forget it; it's not up for discussion at all.

The PA once believed that the Egyptians would usher the PA into the Strip through the front door. It's clear to the PA today that even the regular police in Gaza will not answer to Ramallah; at best, the PA may manage to secure places for a handful of middle-level officials in a few of the Hamas government's ministries. Hamas and Fatah are currently in talks about the deployment of PA personnel at the Kerem Shalom and Erez crossings. But the unity government is nothing more than fiction.

Abbas and his people run into a brick wall whichever way they turn. Arafat, at this point, would have already embarked on an armed conflict. Abbas chose otherwise, and has embarked on an all-out struggle in the international arena, on every front and on every stage. He has no idea where this struggle will lead to, but he's trying to shake Israel into a commitment to withdraw to the 1967 borders.

It's doubtful whether Abbas himself believes it'll work. But he and his people know that the West Bank public views them as betrayers of the Palestinian cause in favor of the spoils of government. If they simply sit back and do nothing, the PA's days are numbered. Israel's security officials are fully aware of the picture, but they aren't doing anything about it. No one cares if the PA disappears or remains intact.

But when a carpet catches fire on the Temple Mount and we wake from our hibernation, we'll find that the regime in Jordan is wobbling, and that the PA no longer exists, that we've erased it; but it'll be too late by then. Perhaps then, when we look to the east and see radical Islam on our doorstep, we'll realize how stupid and arrogant we were and still are.