Dachau gate. 'Deliberate attempt to demolish the memorial at its core'
Photo: AFP

President of Central Council of Jews in Germany says whoever stole 'Work will set you free' sign from former Nazi concentration camp 'is either sick or evil. Probably both.'

Jewish leaders in Germany voiced outrage Monday over the theft of the gate to the former Nazi concentration camp Dachau with the chilling inscription "Arbeit macht frei" ("Work will set you free").

Police said they were following leads but had no concrete information about the theft of the forged iron gate, discovered early Sunday at the Dachau Concentration Camp Memorial near the southern city of Munich.

"This desecration is horrible and shocking," the president of the Central Council of Jews in Germany, Dieter Graumann, told Bild daily. "Whoever did this is either sick or evil. Probably both."

Holocaust survivor and vice president of the International Dachau Committee Max Mannheimer said he was "horrified that Nazis apparently desecrated the memorial to those murdered here and violated the reverence due to such a place."

The head of the memorial centre, Gabriele Hammermann, called the theft a "deliberate, reprehensible attempt to deny and obliterate the memory of the crimes committed in this place" which aimed "to demolish the memorial at its very core." 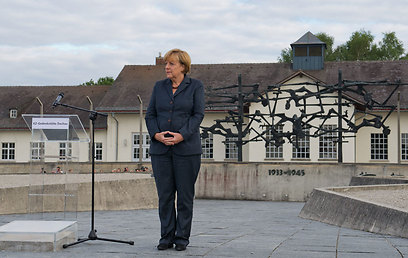 Police were examining whether neo-Nazis committed the crime, but were ready to follow all possible leads, said local police chief Thomas Rauscher.

The theft happened on the night of Saturday to Sunday, between the rounds of security guards watching the site which has no video surveillance system.

The head of the memorial at the former Nazi concentration camp Auschwitz-Birkenau in Poland, Piotr Cywinski, called the theft "an attack against a symbol, an attack against remembrance," said a statement by the Dachau memorial.

A sign with the same inscription at Auschwitz was stolen in 2009, sparking a global outcry. The mastermind of that theft, Swedish neo-Nazi Anders Hoegstroem, was caught and jailed for two and a half years.

The metal sign was eventually recovered cut up into three pieces, leading museum officials to display a replica above the entrance until it was restored in 2011.

The letters set inside the gate at Dachau were also a replica, dating from 1965, after the original slogan was removed from the gate after the US liberation of the camp at the end of World War II.

The slogan once aimed to present the concentration camp as a "work and re-education camp."

"At the same time, these words denote the cynical attitude of the SS to the inmates, for forced labor was one of the primary means of terror in the concentration camps," the statement said.

The Dachau camp opened in 1933, less than two months after Adolf Hitler became German chancellor, as a prison camp for political prisoners.

German Chancellor Angela Merkel, who visited Dachau last year, was due on Tuesday to accept an award from an association of Dachau survivors at an event in Berlin.