Gross, originally from Romania, saw a newspaper article about Greenbaum's Army unit being at Dachau when it was liberated April 29, 1945

The way Ernie Gross and Don Greenbaum laugh and tell jokes with the ease of old friends, it's easy to assume the dapper octogenarians have known each other forever.

In reality, they only met a few months ago. Their familiarity doesn't come from shared memories of a childhood playground or a high school dance but a far darker place: Both men spent a single day at the Dachau concentration camp on the day its 30,000 prisoners were liberated by American GIs in 1945.

Greenbaum, 87, and Gross, 83, don't think they met that day in Dachau but nevertheless share a bond. They met after Gross, who lives in Philadelphia, saw a mention in a local newspaper last November about Greenbaum, a Philadelphia native now living in suburban Bala Cynwyd.

"Ernie wanted to thank me for saving his life, even though there were 50,000 other men there with me," Greenbaum said, with a hint of unease, during an interview at Gross' home.

Gross, then all of 85 pounds after nearly a year of sickness, abuse and constant hunger, had no doubt April 29, 1945, was his last day on earth. Greenbaum, a soldier with Gen. George Patton's Third Army 283rd Field Artillery Battalion, arrived that day at Dachau expecting to seize ammunition, clothing and food that was kept for the Nazis notorious SS forces.

They were both wrong, it turned out.

"As we got near Dachau, about a mile outside the camp, there was an odor we couldn't identify," Greenbaum said. "When we arrived, I saw the boxcars. They were full of bodies."

History would come to call it the Dachau death train: some 40 cattle cars holding more than 2,000 men and women evacuated from another camp — and left to die on the train — in the final weeks of World War II. 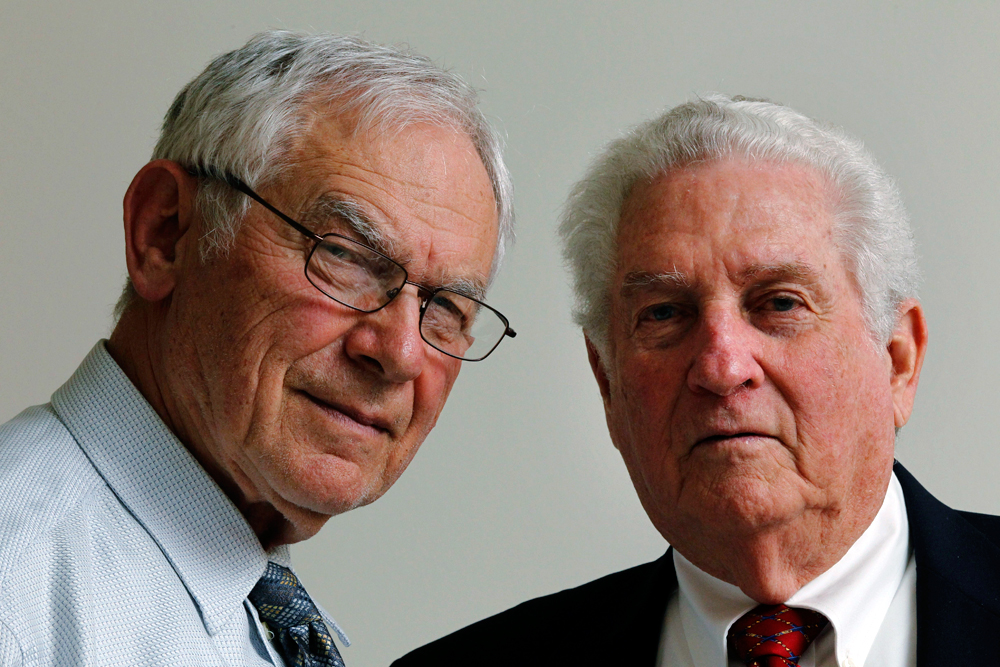 The men, who talk about their experiences at local synagogues and schools, now are working together to find other Dachau survivors and liberators in the area to share their stories. They acknowledge that recounting the horrors of the Holocaust isn't easy but believe it's their duty.

"We had at that time never heard the expression 'concentration camp,' we never heard of a death camp," Greenbaum said. "None of us had any idea."

Gross, a Romanian Jew, was 15 when he and his family were taken from their home, deported to a ghetto in Hungary and eventually packed on a standing-room-only boxcar to Auschwitz in 1942. At the urging of a man next to him as they waited in line to be processed, he lied and told the SS officer he was 17. Any younger and he'd be deemed incapable of hard labor and, he was told, immediately killed.

"The same guy who told me to lie said to me, 'Do you see that smoke in the sky where the sun cannot get through? This is going to be your parents in about two hours," he recalled. "My parents and younger brother and younger sister ... that's the last time I saw them." Of his two older brothers also sent to labor camps, one — his favorite — also died.

When he arrived in Dachau, barely able to walk, Gross knew he would soon be murdered: hanged, shot, gassed, he didn't know. He was so close to death that he didn't care.

"We were standing in this long line and we already knew where we were going," he said. "I was close enough that I could see the crematorium and, all of a sudden, I see the German soldiers throwing down their guns and running away." The first contingent of Americans had arrived.

"If they would have come an hour later, I would not be here to tell this story," Gross said in accented English underscoring his eastern European roots. "They took me right away, they knew I am falling apart, and they put me in a sanitarium to recuperate."

"We met a priest there who took us through the camp. He showed us what was there; the prisoners were walking skeletons," he said. "We called the troop behind us to notify them about what we had come across and to bring food and clothing and blankets and the whole bit. Then we left. We had to keep going."

After the war, both men went on with their lives and tried to leave their wartime nightmares behind.

"I never told my wife about myself, I never told my sons. I wasn't up to it," he said. "After so many years, I decided I better start speaking to people to know who I am and where I come from."

"When you are bitter, it takes energy," he said. Constantly smiling and a consummate joke-teller, he says he tries to make one person laugh every day. Usually, he succeeds.

Greenbaum, whose military career also includes the Battle of the Bulge and a Purple Heart, also never discussed the war until he saw a Holocaust denier on television 20 years ago. "That motivated me to speak because I saw what happened," he said. "This fellow's on TV saying it never happened. I was there and I saw it. Ernie and I, we both were there ... we know."