Israeli government vs. State of Israel

Op-ed: Both Israel's prime minister and right-wing ministers know Jewish nation-state law will only contribute to delegitimization campaign. So why are they giving Israel's haters exactly what they're after?

We have to listen to the arguments presented by Prime Minister Benjamin Netanyahu and the right-wing camp. The things they say are sometimes logical. The absolute justice is on neither side. The arguments in favor of the Jewish nation-state law should also be heard.

But the right's arguments have never sounded more ludicrous. Why do we need this law? What will Israel gain from it?

The main explanation is strengthening Israel's character as a Jewish state. Is Israel suffering from any shortage in terms of recognition of its character? Well, the United Nations Partition Plan, which will be 67 years old in several days, mentioned the term "Jewish state" 29 times. The Declaration of Independence, the pivotal document of the State of Israel's establishment, declares that the State of Israel is a Jewish state. The justified Law of Return was enacted accordingly.

So why the hell do we need an addition? Those who need this addition are mainly saying something about themselves. Their intention isn’t to strengthen Israel's recognition as the Jewish people's nation-state. They have a completely different intention. Indeed, in the past few years, the recognition of Israel as a Jewish state has been undermined, internally as well. But this subversion belongs to the margins. 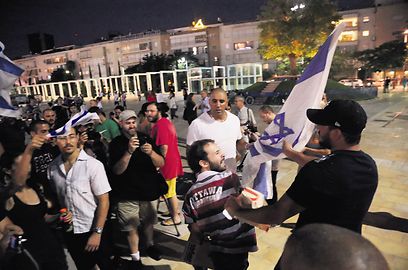 The government's decision 'strengthens those who oppose a Jewish and democratic state, both from the left and from the right' (Photo: Motti Kimchi)

So there is one outcome: This initiative strengthens those who oppose a Jewish and democratic state, both from the left and from the right.

What troubles me more is that both the prime minister and the Likud and right-wing ministers know very well that there is no need for this law. They know it contains absolutely nothing. They know that its only contribution will be to the Israel delegitimization campaign.

Why there are many bad people who are looking for any excuse to present Israel as a racist, nationalistic, fascist state. They argue that there is no way to combine "Jewish" with "Democratic." And now Israel's prime minister, the man who knows this law is harmful and unnecessary, gives Israel's haters exactly what they're looking for. So I must ask again: Why?

The commentators say it's a political matter. The Likud primary elections. If that's the reason, then the Likud's ministers and Knesset members apparently see their voters as a group of fools craving provocative and unnecessary moves.

That may be true regarding a small number of the voters or Likud Central Committee members. But it's safe to assume that there is a big camp of sane people there. They are perfectly capable of telling the difference between a national interest and a foolish and provocative move. But the Likud leaders, it seems, don't think very highly of the Likud members.

Israel often has excellent arguments against the anti-Israel campaign. It's quite sad that this time it's the Israeli government which has waged a campaign against the State of Israel.