'It took Lapid five minutes to realize that the entire meeting with Netanyahu was a farce'
Photo: Alex Kolomoisky

Netanyahu has given in to his paranoia

Op-ed: If the prime minister has decided to go to the polls, he should be honest enough to say so; instead, he is looking for ways to call elections and blame someone else for it.

When Finance Minister Yair Lapid walked out of the Prime Minister's Bureau at the end of his meeting with Benjamin Netanyahu, he saw his advisor and confidant, Hillel Kobrinsky, waiting on the sofa at the entrance and waving his cell phone at him.

On the screen there was a statement from the Prime Minister's Office about the demands Netanyahu presented to Lapid as a condition for the maintaining the current coalition. It's hard to believe that within seconds from the moment Lapid got up and left the office, Netanyahu's associates managed to issue a press release detailing the five conditions.

In other words, the dramatic meeting was one big act. An act to the public, an act to the political system, an act to the media. It was a farce, Lapid told his associates on Monday night. It means that Netanyahu had already decided to call elections and had only summoned Lapid to a fake meeting so that he could accuse Lapid that this was all happening because of him.

Netanyahu made Lapid an offer he had to refuse. The demands he presented for the government's continued existence, and especially the condition to freeze the zero-VAT housing plan, were like opening the office door for him in order to throw him out of the window. 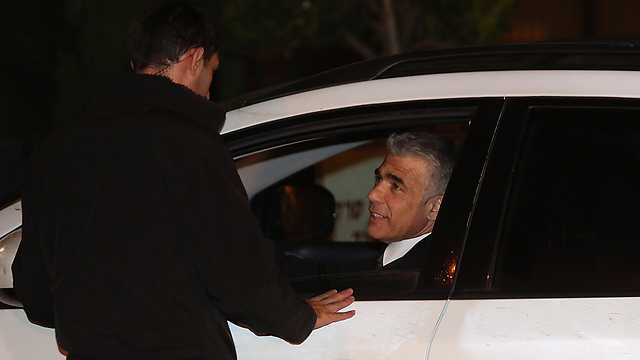 Finance Minister Lapid arriving at the Prime Minister's Office on Monday night. Netanyahu made him an offer he could not accept (Photo: Gil Yohanan)

If we thought that Netanyahu would go to elections over the nationality bill, that pretext is now over. Netanyahu must have realized that this would be an unpopular reason among wide circles, including Likud voters. That's the message he got from the Likud old guard, which has expressed reservations over the proposed law.

Netanyahu decided to choose a different dispute, and is there anything better than the apple of Lapid's eye, the legislation with which the finance minister wanted to leave a mark - like a star's handprints on Hollywood Boulevard?

One can only wonder why Netanyahu selected a bill that he had personally supported and voted in favor of both in the government and in its first reading at the Knesset, and why he is now demanding that it will be frozen in favor of maintaining the government.

Netanyahu knew that Lapid would not be able to accept this condition. He probably didn't even want him to. Netanyahu apparently believes that holding elections now will benefit him, regardless of the fact that all the problems on the agenda could be solved with a bit of goodwill.

It seems that Netanyahu has given in to his paranoia: He was convinced that Lapid was plotting to establish an alternative government behind his back, and the ultra-Orthodox parties apparently stimulated his fears. It's quite possible that the deal between Netanyahu and the haredim was finalized Monday night: They promised him their support after the elections, and he promised them to call elections. But we all know what these promises are worth. At the end of the day, the elections will be determined by the numbers.

The absurd thing is that despite all of Netanyahu's demons, there was never an alternative government and the State of Israel is going to elections over nothing, during such an unstable period, as the storm rages around us and the prime minister himself warns day and night against the dangers lurking on ahead, not to mention the price the public is about to pay for these elections.

So Netanyahu should not be surprised if this whole thing boomerangs back and hits him in the face, when the public chooses to get rid of him on Election Day.

Netanyahu's election campaign begun with a statement he made Monday: He is appealing to the right-wing camp when he demands an end to criticism of the government over the construction in Jerusalem, he is trying to restore his image as "Mr. Security" when he demands the transfer of NIS 6 billion to the defense budget so that we can arm ourselves with Iron Dome systems and armored personnel carriers, and he is trying to appeal to social groups with the ideas he is raising about the cost of living and housing solutions.

Netanyahu's condition regarding the zero-VAT plan was not only directed at Lapid. His proposal, to use the NIS 3 billion dollars the government will save by freezing the bill in order to create "real" housing solutions – as his statement said – and alternatives for reducing the cost of living, is an appeal to one of his other rivals in the next elections, former minister Moshe Kahlon, who is expected to base his campaign on the cost of living.

It took Lapid five minutes on Monday night to realize that the prime minister was heading to elections and that the entire meeting was a farce.

But Lapid, as always in these kinds of meetings, was polite. Okay, the prime minister finally said to him, I understand that this is going nowhere.

Yes, said Lapid. Thank you very much. And he walked out.

But the farce is not just in that fake meeting. The farce is in the prime minister's conduct.