It's the Jewish people's gift to the couple
Photo: Shutterstock

At least one member of couple has to be considered halachically Jewish in order to be eligible for subsidized nine-day trip. 'It's a way to bring the non-Jewish spouse closer to Judaism,' organization's founder explains.

A new philanthropic organization in the United States aims to encourage Jewish American newlyweds to spend their honeymoon in Israel.

The couples will pay just $1,500 out of $9,500 for a nine-day vacation in the Holy Land. At least one member of the couple has to be considered halachically Jewish to be eligible for the benefit.

The couples will arrive in the country as part of a group of 20 couples from the same city. The first two groups will arrive in Israel in the spring – one from Los Angeles and one from Phoenix, Arizona.

The organization, Honeymoon Israel, which is funded from donations by a Jewish family that asked to remain anonymous, has already raised enough money to fund the flights and accommodation for groups for three years.

The organization hopes to increase the number of couples by raising more money. The first condition for participating in the program is that one member of the couple must be Jewish. The organization's founders say this is their way of dealing with the assimilation problem in the United States. 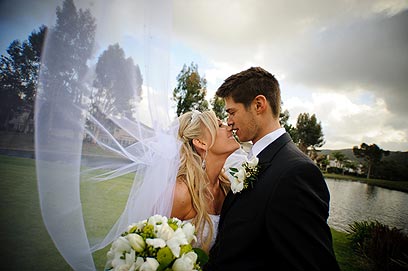 Dealing with assimilation? 'We want to show them that they are welcome here' (Photo: Shutterstock)

"In many places in the US, 50-60 percent of the couples are in mixed marriages. This is a way to bring the non-Jewish spouse closer to Judaism. We want to show them that they are welcome here. As far as we are concerned, it is the Jewish people's gift to the couple," says Honeymoon Israel Co-Director Avi Rubel of New York, one of the organization's founders.

Another condition is that at least one spouse has never visited Israel before. If both traveled to Israel as part of the Birthright project, for example, they won't be able to participate in the honeymoon program.

The third condition is that the couple got married up to five years ago. The Israeli honeymoon will include a traditional Shabbat in Jerusalem and another Shabbat in Tel Aviv, during which the couple will be guests of an Israeli family, and visit Tel Aviv's nightlife and entertainment centers. "We don't want them to just be tourists, but to feel a personal connection to Israel and to Judaism," Rubel explains.