Avraham Burg. 'A huge contribution to the demonization of Israel'
Photo: Ohad Zwigenberg

Op-ed: How did one of Zionist left's leaders, a former Jewish Agency chairman and Knesset speaker, move to margins of anti-Zionist camp?

We are witnessing a man who has come a long and fascinating way, from the leadership of the Zionist camp to the margins of the anti-Zionist camp.

He was once a talented young man, a wonderful rhetorician, a television presenter, a Peace Now activist who quickly became the Labor Party's rising star, and later the Jewish Agency's chairman and Knesset speaker. He was the embodiment of the Zionist left. Both leftist and Zionist.

The year 2000 was one of the most fascinating years of the Israeli-Arab conflict. The Camp David talks failed, despite a first-ever Israeli willingness to divide Jerusalem. One of the strongest opponents was none other than Avraham (Avrum) Burg.

At the end of that year, on December 23, the Clinton outline was put on the table and approved by the Israeli government. The Palestinians' response was a big and clear "no," which included their insistence on the "right of return." 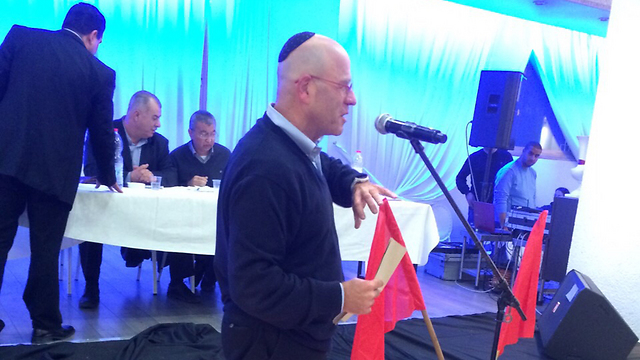 And what happened at the time to the wonder child of the left and Labor Party? He pointed an accusing finger at Israel. In September 2003, on the backdrop of the intensifying Palestinian terror, Burg published an article titled "The end of Zionism" in British newspaper The Guardian, and later in French daily Le Monde, in which he mainly provided justifications for the Palestinian murderousness.

"Israel, having ceased to care about the children of the Palestinians, should not be surprised when they come washed in hatred and blow themselves up in the centers of Israeli escapism," he wrote. "They spill their own blood in our restaurants in order to ruin our appetites, because they have children and parents at home who are hungry and humiliated."

Burg should have known that the Palestinians had rejected a proposal for a state. The leaders of the Arab world supported it, but then-Palestinian Authority Chairman Yasser Arafat preferred the road of violence.

Burg knew, and definitely should have known, that the suicide bombers' hatred was not the result of Israeli oppression but the result of incitement and brainwashing. The terror, already then, was not against the occupation – but against Israel's actual existence.

That was Burg's contribution to the demonization process, the dehumanization and delegitimization of Israel. It was a huge contribution. Because the article was written by a person who had served as the Jewish Agency chairman and as the Knesset speaker, and for several weeks in 2000 he was even Israel's acting president.

The deterioration continued. Burg became one of the camp's darlings. He was elected, for example, as chairman of the New Israel Fund's International Council, precisely because of his new views.

One can take a different road of course. Former Labor Party Chairwoman Shelly Yachimovich went the opposite way. She voted for Hadash in the past. She sobered up. The facts affected her. She is not against equality for Arabs, but she is also in favor of a Jewish nation state. She proves that one can be both leftist and Zionist.

One can and should criticize Israel. The policy includes mistakes as well. But what happened to Burg – a complete denial of the right for a Jewish nation state, using the excuse of "the need for equality" – has happened to many people in the left. The struggle for equality is justified. But does the fact that there is a Slovakian minority in the Czech Republic deny the right for a Czech nation state?

Burg's claims against Israel are so unfounded that it's hard to believe they are coming out of the mouth of a person who was the Labor Party's whiz kid.

Now Burg has now landed in the Hadash party whose secretary-general, Ayman Odeh, heads the committee against national service, which was established by the Higher Arab Monitoring Committee. There is no difference between opposing duties and opposing rights. It's of course the best way to increase the alienation between Jews and Arabs.

But don't worry, we are talking about Avrum Burg here. He will soon find excuses and justifications.