Hassan Nasrallah and Jihad Mughniyeh. 'Someone threw a match into a powder keg'

Analysis: A helicopter and two missiles killed a group of Lebanese and Iranian terror activists in Syrian Golan Heights – and now IDF and northern residents are in suspense: Will Hezbollah respond or hold back?

Someone threw a match into a powder keg and is now waiting to see whether it will explode or not.

This is a dangerous exercise in practical chemistry conducted on the eve of the final exam: The elections in Israel. A helicopter and two missiles killed a group of Lebanese and Iranian terror activists in the Syrian Golan Heights – and now we're all in suspense: Will Hezbollah respond or hold back?

There are several partners in this pyromania. Hezbollah, likely with Iran's direct help and guidance, was about to carry out a series of terror attacks against Israel on the Golan Heights in order to renew the balance of deterrence against strikes attributed to the Israel Air Force.

The Iranians and the Syrians reached the conclusion that Israel is no longer deterred on the Syrian front and is carrying on uninhibited, and that it should therefore be forced to get back in line through Hezbollah or, to be more exact, through its Golan front.

This organization, led by Jihad Mughniyeh, gained control of an outpost in a series of villages, some Druze, in the Syrian Golan. If the attacks had been carried out, Israel would not have been able to hold back, especially on the eve of elections. The two missiles which killed the team that planned the attacks were allegedly a preventive step.

This operation may have succeeded, but the patient – the situation in the north – is only deteriorating. Assuming that the reports from Syria and Lebanon are true, the northern front is reaching a boiling point as we speak, perhaps the most explosive boiling point since the start of the civil war in Syria. 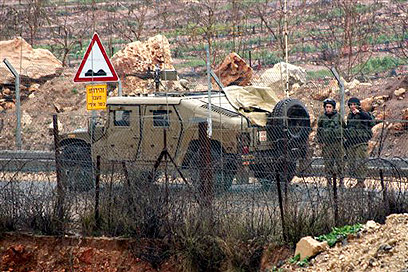 Israel-Lebanon border. 'The operation may have succeeded, but the patient - the situation in the north - is only deteriorating' (Archive photo: AP)

Four days after Hezbollah Secretary-General Hassan Nasrallah gave a pompous interview to the Lebanese Al-Mayadeen network – in which he threatened Israel with modern weapons, the occupation of parts of the Galilee and a response from the "resistance front" to the strikes in Syria – Israel is giving him the finger: Here, we killed some of your top men in Syria. Now let's see what you can do.

The official Israel is keeping quiet, hoping that the other side would rather swallow the bitter pill. This trick worked well with the Syrians, after the bombings of weapon shipments to Hezbollah, but it's not as effective with Nasrallah's organization. In March 2014, for example, Hezbollah attacked IDF patrols near the fence in the Golan and Mount Dov after some of its senior members were hit. It was only a miracle that none of the soldiers were killed.

What happened on Sunday looks like it was taken from an alleged scenario of an IDF exercise simulating an escalation on the northern front. And this is what such a scenario could look like: Israel carries out a targeted assassination against senior Hezbollah members, including a symbolic personality – someone like the son of the legendary operations officer, Imad Mughniyeh.

And then the war game begins: Hezbollah responds by firing at the Golan, by executing an attack against IDF forces on the Lebanon border, or worse – by firing rockets into Israel. The IDF may respond severely or in a symbolic manner, indicating that it is interested in ending this round of escalation.

But the scenario could deteriorate, and both sides may find themselves in a "fighting embrace" against their own interest, which is to maintain the status quo. It's clear to both sides that the conflict will occur. The question is when: Will it be this year, or after the situation in Syria is clarified?

This scenario, whose first chapter is taking place before our eyes, illustrates the similarity between the Golan front and the Gaza front. Like in Gaza, there is no regular army on the other side, no UN, no one to complain to. Like in Gaza, there is a border fence in the Golan and a new regional division with a command intelligence collection regiment and observation means.

The fighting methods in the north are also similar to the ones in Gaza: Targeted assassinations. Jihad Mughniyeh was killed by a weapon system with a public signature of the operator: A fighter jet or another aircraft.

Yet there is a dramatic difference between Gaza and the Golan, which is concealed in the intensity of the conflict: The strength gained by Hezbollah makes all the difference.

Whoever decided on Sunday's strike probably estimated that Hezbollah's interest – while its organs are stretched on all fronts – is to respond moderately. They may or may not be right. Intelligence is not an exact science.