From 9.5 million in 1939, the number of European Jews has fallen to 1.4 million; and as anti-Semitism appears to be on the rise in the continent, some speak of a new 'exodus.'

The last several decades have seen a precipitous drop in the number of Jews living in Europe, according to a poll published Monday by the Pew Research Center.

Emigration was particularly extensive in Eastern Europe and the former Soviet Union. An estimated 3.4 million Jews lived in the European USSR in 1939. Following the catastrophic population decrease resulting from the Holocaust, the number was reduced to 2 million.

But emigration since 1945 has left 310,000 Jewish inhabitants. In Eastern European countries, the 4.7 million-strong Jewish community has dwindled to less than 100,000. 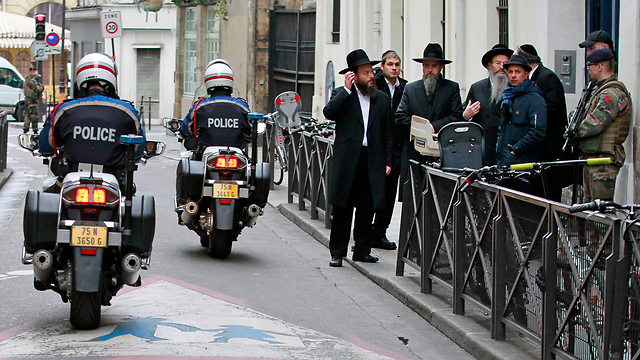 Police patrol outside of a synagogue in France last month, following an anti-Semitic attack (Photo: AP)

The report noted that while most of decline can be attributed to emigration to Israel, intermarriage and assimilation could also be factors.

Meanwhile, the decline appeared to be less severe in some Western European countries, whose Jewish population in 1939 was relatively smaller to begin with. About the same number of Jews live in France today as in 1939, while the number of Jews in the United Kingdom has dropped from 345,000 to 280,000.

However, the report noted recent reports of increased emigration from France, as well as new report showing a record level of anti-Semitism in the UK.