As far as Obama is concerned, his relationship with Netanyahu is over
Photo: AP

Israel will feel US rage after Netanyahu leaves Washington

Analysis: White House officials already working on plan for day after Congress speech; Israel, which has asked for another $317 million for defense, may find out America far less generous than before.

Throughout the years, the White House made sure to disguise the mutual loathing between US President Barack Obama and Prime Minister Benjamin Netanyahu as lovers' quarrels, as if it were a relationship between a couple experiencing ups and downs.

The cover-up was perfect. The false impression was maintained, and so was the mutual respect required by the protocol. Each time he arrived at the American capital, Netanyahu was greeted courteously, according to the rules of ceremony. The White House did everything in its power so that the dirty laundry would not be washed in public.

Israel has a clear interest to be portrayed in the world, particularly in the eyes of the Arab states, as a country which enjoys the unconditional support of the American administration, which has many advantages, including first-rate intelligence and security cooperation – and everything the strongest world power can offer its small ally surrounded by enemies: From the Iron Dome system to the Stuxnet computer worm, which – according to the New York Times – was developed in cooperation with the Mossad and IDF Unit 8200 in order to damage the Iranian centrifuges' control systems.

Netanyahu's decision to address the Congress this week, behind Obama's back and in order to warn the lawmakers and American public against the agreement that the president wishes to sign with Iran, has made senior administration officials take their gloves off. The way they see it, Netanyahu is breaking the rules of the game by supplying the Republican Party with ammunition against the president. That's the reason why they are no longer obligated to save his face. 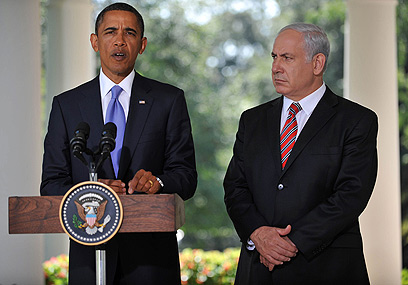 Netanyahu and Obama. It's not just a credibility crisis, it’s the end of the road (Archive photo: AFP)

Netanyahu will not be greeted in Washington with a gun salute, but with heavy verbal artillery aimed at crushing his arguments and relaying an unequivocal message to the Israeli public: When your prime minister tries to thwart an agreement which is taking shape with Iran, he is in fact jeopardizing Israel's security, because this is the only kind of agreement which will prevent the Ayatollah regime from attaining a nuclear weapon.

The Republicans in the Congress will applaud Netanyahu, but they are not the ones who decide on the American foreign policy. The president is. Obama doesn’t need the Congress' approval to sign an agreement with Iran – and he is determined to do so. In his opinion, such an agreement will not only be the highlight of his foreign policy, but the only way to prevent Iran from getting hold of a nuclear weapon.

The American rage towards Netanyahu, since his invitation to address the Congress was made public, has hit us in two waves so far. At first, Obama, Vice President Joe Biden and Secretary of State John Kerry announced that they would not meet with him, while Democratic members of the House of Representatives announced that they would boycott his speech. When Netanyahu refused to back down, the administration replaced its cold shoulder with a frontal assault. A series of officials were sent to publicly attack the prime minister, and this attack will only grow stronger this week.

The third wave may hit us when Netanyahu leaves Washington. Israel, which according to the Bloomberg network, has asked the United States for another $317 million for the development of the David's Sling and Arrow 3 defense systems, may find out that America is much less generous than it was before.

Administration officials are already working on a plan for the day after Netanyahu's speech: Which sections will be cut from the aid to Israel and which requests arriving from Israel will be met with foot-dragging.

Netanyahu is therefore making Israel lose twice: He won't be able to stop the agreement with Iran, if it reaches the signature stage, and he will no longer succeed in getting the generous and protecting American hand back.

When he leaves the US, Netanyahu will leave behind scorched earth. The White House hopes the Israelis will realize the extent of the crisis and bring about a political upheaval on March 17 which will lead to the rise of a prime minister who will restore the relations with the administration.

Obama has two years left in the White House, and as far as he is concerned, his relationship with Netanyahu is over. Now it's not just a credibility crisis, it's the end of the road.