Is Obama worse than Chamberlain?

Op-ed: The comparison between Lausanne 2015 and Munich 1938 lets Iran off lightly, as Germany at the time wasn't calling for 'Death to the Jews'.

When Jan Masaryk, the foreign minister of Czechoslovakia at the time, heard first-hand the English Parliament greet Neville Chamberlain's announcement about a summit meeting with Adolf Hitler with raucous applause, he was rather confused.

After all, the threatening German leader was demanding appeasement in the form of a piece of Masaryk's own country. The summit took place two days later. Representatives of Czechoslovakia weren't even invited. They were simply notified. The rest is history.

The comparison between Lausanne 2015 and Munich 1938 lets Iran off lightly. Because Germany at the time, despite being a dark country, wasn't calling for "Death to England" or "Death to the Jews." It wasn't in control at that stage of four European countries. The Iran of today, however, has been singing its genocidal mantra for years. It preaches and strives for the destruction of the State of Israel. And many, too many, simply don't want to listen. 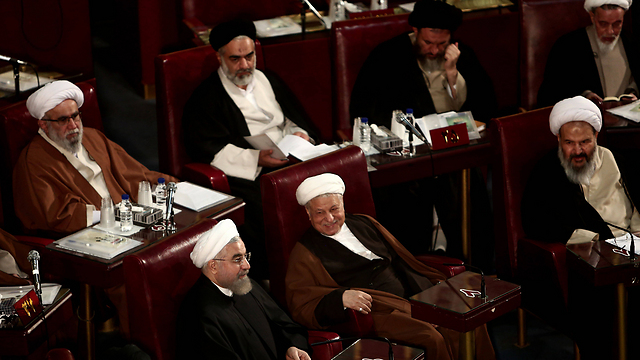 The leaders of Iran. Singing their genocidal mantra for years (Photo: AFP)

A few years ago, a leading US newspaper, the Washington Post, conducted a discussion on the question: Did the Iranian leader call for wiping Israel off the map? The arguments raised spoke of mistranslation and other nonsense. The discussion ended. The question marks were erased. The cries of "Death to America" and "Death to Israel "are sounded again and again, with ecstatic fervor, on all levels and by the masses.

Just recently, Supreme Leader Ali Khamenei himself joined the masses in calling for "Death to America." The Houthis, Iran's affiliates in Yemen, have a flag bearing the words "Death to America" and "Death to Israel." And a senior Iranian official, Mohammad Reza Naqdi, the head of the Basij militia unit of Iran's Revolutionary Guards, again made it clear on Iranian state television, two days before the agreement was signed, that "wiping Israel off the map is non-negotiable."

Are these statements only made for show? As we speak, Iran continues to equip Hezbollah with far more precise weapons, with the purpose of causing much greater damage to Israel. This is the same Iran that is being choked by sanctions. This is the same Iran whose economy is teetering. But nothing is as important as the ultimate goal – of the warmongering and the destruction of the State of Israel.

It's not that they really can. But they are gripped by fervor. The irrational behavior is reminiscent of those dark days. Even with its forces taking a pounding and on the verge of defeat, Germany continued to pour all its efforts into maintaining its extermination enterprise. But going back to comparisons, Germany of 1939 wasn't preaching destruction; Iran of 2015 is.

The facts are laid out before us. The declarations are crystal clear. The actions are open and widely known. And yet, those same voices keep saying to Israel: Enough already with these comparisons. Why enough? Why shouldn't Israel take the Iranian declarations seriously? Are we oblivious to the murder fest of recent years, recent months, recent days of the Jihadists wherever they may be? Why does the leader of the free world refuse to listen?

The supporters of appeasement with Iran at all costs, who are now lauding the agreement, argue that there is no need for another war because all the wars have only made things worse. Another bit of misdirection. Because the opponents of the agreement weren't demanding that the US embark on another war. On the contrary. The regime of sanctions is proving itself. If Iran was ready to capitulate temporarily, it was due to the sanctions.

Despite its limited means, Iran continues to invest all its energy into weapons, in addition to the nuclear project. What's going to happen without the sanctions? Will Iran become a peace-loving country that seeks reconciliation? Will Iran put the brakes on its expansionist aspirations and will Iran stop aiding Hezbollah? The answers today are well known. In 1938, they were much less clearer.

I wrote a while ago that Obama isn't Chamberlain. The agreement raises some tough questions. Perhaps, just perhaps, he is worse than Chamberlain. I hope to God we're proven wrong.