A message to Israel's left

Op-ed: Aligning with the global left and going to Washington to join in with the anti-Israeli and anti-Zionist sentiment is not the way to combat the right.

This current period between one remembrance day and the next is another opportunity to revisit the ongoing issues of national identity, collective memory, the Holocaust and revival.

When you add to this the flood of articles, analyses and commentaries in the wake of the election results, these are fascinating days of reflection and soul searching – or, more precisely, they could be. Because there is no soul searching.

What we are seeing, for the most part, is finger-pointing at those who refused to act in keeping with the operating instructions of the political commissars. It matters not that the pollsters were wrong about the parties but got it very right with respect to the political blocs.

Based on the flood of reports, you'd think the elections produced a turnaround, that the right managed to remove the left from power. In the bubble they created for themselves, they were convinced that the left was in power, up until the moment the results were published.

And ever since Election Day, things have only taken a turn for the worse. Zionist Union and Yesh Atid have learned nothing and forgotten nothing. When representatives of these two parties participate in a J Street conference, that's just fine. I have appeared at their conferences too.

The things that are said there are the problem. When one of the speakers there said there was no need for a Jewish state, they didn't say a single word in response. In a place where the tone is anti-Israel, where Saeb Erekat claims that Israel is a war criminal, where the demand for the right of return is greeted by applause, where a lecturer from Israel calls for an end to military aid to Israel, they should stand up and say something different. Instead, however, they remained silent and timid.

J Street, after all, sides almost completely with the Palestinians. J Street, after all, is aligned more with Ali Khamenei than it is with Benjamin Netanyahu. Is this the message of the moderate left? Of Yesh Atid? Of the Labor Party? Was that the purpose of the trip to the conference in Washington? Is this a camp that can call itself Zionist? So perhaps, just perhaps, those voters who were on the fence and then opted at the last minute to stay with Netanyahu knew exactly what they were doing. 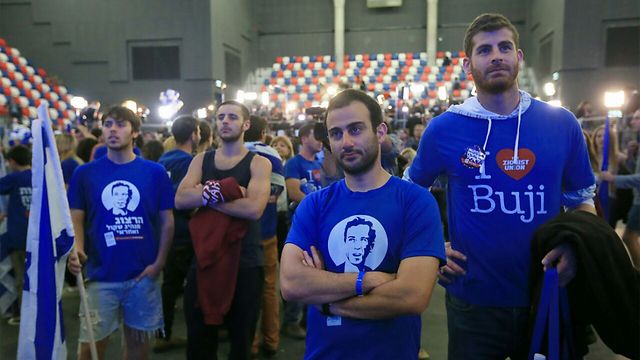 The leftwing needs to take a sober look at the Palestinian reality. (Photo: Ido Erez)

Suppose, just suppose, that we were to take the things said by some of the representatives of the left before and after the election, and instead of directing them at right-wingers and/or Mizrahim, we were to say them about Muslims and Arabs. What then? We'd get right-wing racism of the darkest kind.

But when it comes to the hatred and incitement not only on the part of Hamas, but on the part of the Palestinian Authority too, those same leftists keep their eyes and mouths shut. The left, after all, wouldn't dare say even one-tenth of the things it says about the right about Muslims. This is exactly, but exactly, the same global double standard that led the latest UN conference about the situation of women around the world to single out and condemn just one country – yes, Israel.

The right is making a mistake. I have written so and I will write so again. It is undermining Israel as a Jewish and democratic state and leading us into the nightmare of a bi-national reality. But aligning with the global left and going to Washington to join in with the anti-Israeli and anti-Zionist sentiment is not the way to combat the right.

The Israeli left, including the Labor Party, insists on doing the very opposite. It prefers to huddle under the wings of the left of J Street and Breaking the Silence and other Jewish and Palestinian guests who negate Israel's right to exist or think that its very establishment was a mistake, and cooperate, in silence only sometimes, with those involved in the demonization of Israel rather than criticism of Israel.

I'm not sure I would say the same these days. But as an exercise for the mind, I serve it up to the left, as food for thought.