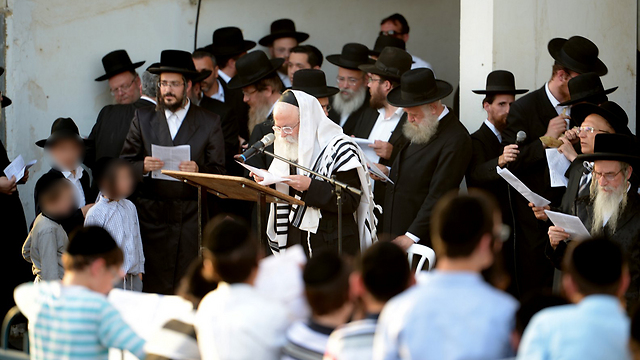 Rebbes: Rocket fired at Ashdod because of Shabbat desecration

Leaders of Hasidic movements of Sadigura and Shomrei Emunim say rocket fired from Gaza on Tuesday night must be seen as a 'message from Heaven' against violations of Jewish day of rest at local shopping center.

Two leading rabbis from the southern city of Ashdod have ruled that the rocket which exploded near the city on Tuesday evening was a message from God against the desecration of Shabbat in the local Big Fashion shopping center, and that the violation of the Jewish day of rest poses a security threat to the residents. In the bank few weeks, ultra-Orthodox activists have been waging a war on the new Ashdod shopping mall, and the rabbis took advantage of the rocket fire from Gaza to express their opinion on the matter.
Last Year
Haredi paper: Missiles prevented desecration of Shabbat
Kobi Nachshoni
Mouthpiece of Lithuanian leader Rabbi Shteinman finds positive side to rocket attacks on Tel Aviv, noting that city's 'cafés, supermarkets and restaurants were completely empty' over weekend.
Haredi paper: Missiles prevented desecration of Shabbat
The rocket landed near the city during a meeting between Rabbi Gedalia Moshe Rota, known as the rebbe of the Shomrei Emunim Hasidic group in of Ashdod, and Rabbi Israel Moshe Friedman, the rebbe of Sadigura, and the two religious leaders rushed to convey a clear message to their followers.

"The city's residents must see it as a hint from Heaven, as Shabbat is the mezuzah and protection of the city," said the Sadigura rebbe. "They must wake up, observe Shabbat even more and do whatever they can to overcome the desecrations of Shabbat, God forbid, which threaten the city residents' security."

No casualties thank to prayers

The Shomrei Emunim rebbe added, "There is no doubt that thanks to the many residents standing by the Sabbath and their willingness to work for it, and mainly thanks to the mass prayer of thousands of the city's residents who gathered to pray together (in a rally against the desecration of Shabbat about two weeks ago) – we got to see God's mercy eye to eye."

"As Jews, we know that there is nothing which is done unsupervised," the Sadigura rebbe explained the link between Shabbat and the rocket fire. "Indeed, we have seen miracles when missiles did not harm a single person in Israel and caused no physical or property damage, thanks to the devotion of thousands in Israel who observe Shabbat, and thanks to the prayers said in the city in the past week." Hamevaser newspaper, which represents a number of Hasidic movements, provided a colorful description of the occasion: "While the sounds of sirens intimidated the city, the rebbes sat together, as the public listened attentively and respectfully to what they had to say. "Shortly afterwards, it was reported that one of the missiles had landed near the city's southern entrance, close to the Big Fashion center, which has been in the eye of the storm recently due to the horrible desecrations of Shabbat taking place there."