Obama crossed red lines and may have to pay the price
Photo: AFP 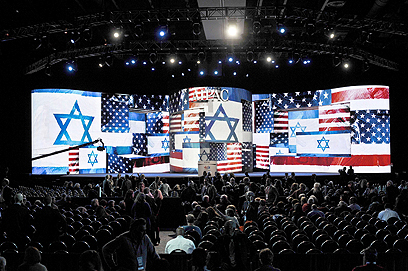 'Jewish power' is an illusion

Op-ed: If opposition to Iran deal continues to grow, it won't be because of successful campaign launched by Netanyahu or Jewish lobby, but because of Obama's failed marketing of agreement.

The US Jewry is worried. Someone has crossed the red lines. And no, it's not Prime Minister Benjamin Netanyahu.

Who should a Jew support? The agreement's opponents or its supporters? There are many legitimate reasons for and against. The problem is that when a non-Jew expresses a political opinion, it's a straightforward opinion. But when a Jew expresses an opinion, he has a problem.

If he supports, he may be seen as abandoning Israel. If he opposes, he will immediately be accused of being loyal to Israel. In English it's called "Israel-firsters" (a derogatory term for Jews who favor the Israeli interest over the American interest). It's almost like being accused of betrayal.

These claims have already been voiced in the past and may return in full force: Once again the Jews are dragging the United States into unnecessary conflicts with the Muslim world, once again they are serving the interests of a foreign state, once again their powerful capital is influencing the Senate and Congress members.

AIPAC conference. There is no 'Jewish power' because the Jews don't have a unified stance (Archive photo: AFP)

But the debate about the Jewish stance has already been stepped up. It’s no longer just remote websites, talkbacks and social networks. This time, the problem is not the margins. Jewish magazine Tablet, which practices political diversity and has many editors who support the agreement, published an unprecedented scathing editorial, pointing a finger at the White House which, the magazine argues, is spreading the sickening claims about "dual loyalty" and a lobby of "foreign interests."

"It’s the kind of dark, nasty stuff we might expect to hear at a white power rally, not from the president of the United States – and it’s gotten so blatant that even many of us who are generally sympathetic to the administration, and even this deal, have been shaken by it," the article stated.

Many Jews, including the Tablet editors, are furious over the leaks about the rhetoric used by Obama in phone conversations aimed at convincing Congress members.

The truth is that the "Jewish power" is mainly an illusion. It's not that the Jews are idlers. On the contrary, they are thriving. They hold key positions in two of the most important bodies of knowledge – the media and the academia.

But there is no "Jewish power," because the Jews don't have a unified stance. The Jewish establishment, which is usually pro-Israel, is faced by the Jews in the press and the academia whose views range from deep hostility towards Israel to clear lack of support for Israel.

In the anti-Semitic rhetoric, the American press in general and the New York Times in particular are noticeable features of the "Jewish power." There is one thing that can be said for certain about the New York Times: It is not pro-Israel. It is a power center which is equivalent at least to the Conference of Presidents, and probably much more.

And in general, Israel's strongest critics are Jewish professors and journalists. The Jews are much more represented than their relative proportion in the population in the BDS campaign. So all the talks about "Jewish power" when it comes to automatic support for Israel are nonsense.

The public opinion in the US has indeed changed. Immediately after the agreement with Iran was signed, there was an absolute majority in favor of it – both in the general public and among the Jews. Now most Americans are against the agreement, and it turns out that most Jews are too. It didn't happen because of the "Jewish power." It happened because of Secretary of State John Kerry's embarrassing testimony to the Senate, and because more and more faults were exposed in the agreement.

If this trend continues, it won't be thanks to the successful campaign launched by Netanyahu or the Jewish lobby, but because of Obama's failed marketing. He is the one who crossed red lines, and he may pay the price.