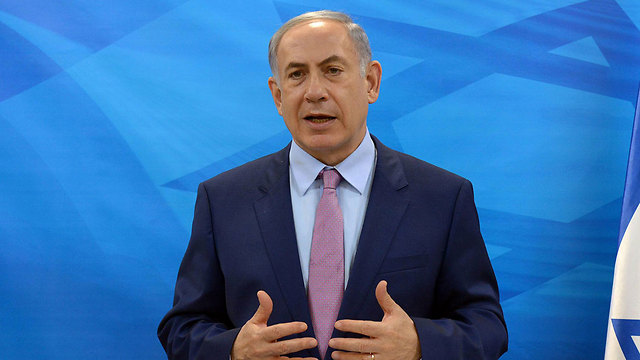 It's not American Jewry's responsibility to save Israel from Iran deal

Op-ed: It would be a historic mistake to push US Jews into a corner, and force them to choose between the trust and respect they have for their president, and answering the cry for help coming from Jerusalem.

We finally have an answer to a question that has been hanging overhead ever since Prime Minister Netanyahu launched his campaign to thwart the nuclear deal with Iran: If the US rejects the agreement, it will fall apart.

This means Iran will be free to renew its nuclear activities - the facility in Arak, for example, which under the agreement is supposed to be completely dismantled, could resume plutonium production, which is an alternative path to a nuclear bomb, in addition to uranium enrichment.
Damage Control
It could have been Netanyahu's finest hour
Orly Azoulay
Analysis: Israel's PM should have realized that the Iran deal train has left the station, conceded defeat and worked to minimize the damage he had inflicted on the bilateral realtions. Moments like this can turn a prime minister into a leader.
It could have been Netanyahu's finest hour
Furthermore, the international sanctions regime will collapse. The US will be the only country to maintain its sanctions, while Russia and China will rush to renew arms sales to Tehran, with Moscow helping the Islamic Republic develop its missile arsenal, as it has done in the past.

This is the immediate and tangible price to pay for the failure of the deal. And more will follow.

Prime Minister Benjamin Netanyahu (Photo: Haim Zach, GPO)
The prime minister's emotional plea to American Jews this week to join the campaign against President Obama actually imposes the responsibility for the fate of the State of Israel on them. They are urged to take on this all-Jewish responsibility to prevent the worst from happening: If they do not pressure their representatives in Congress to vote down the agreement, Israel will face an existential threat. I reject this basic premise. American Jewry doesn't bear the responsibility to save Israel - the Israeli public, and its governments throughout the years, are the ones responsible for the fate of the Jewish people. Since it achieved independence, Israel has been a safe haven to any Jew in trouble and every community in danger. We proved we could maintain this right for protection in the past. Israel is currently the strongest country in the Middle East - and not just because of its defense capabilities, but also thanks to its originality and creativity in the fields of science, technology and intelligence, which are unparalleled all over the world. If I can understand this, then surely the prime minister, the ministers of the cabinet, and the members of the Knesset's Subcommittee for Intelligence and Secret Services must know this. Israel's existence is assured, and Netanyahu is supposed to radiate confidence and pride of the achievements and abilities that he knows better than anyone else. Based on this very confidence in the system that he leads, he must also have faith in Israel's continued and eternal existence, rather than bring up fears from the distant past in order to shake American Jewry into action.

This approach could cost both Israel and American Jews dearly: It would be a historic mistake to push US Jews into a corner, and force them to choose between the trust and respect they have for their president, and answering the cry for help coming from Jerusalem. In addition, the kind of campaign Netanyahu is waging against the agreement actually undermines Israel's deterrence as a strong and steadfast country.

Netanyahu's plea to American Jews was made against the backdrop of another issue that has been repeatedly coming up of late: The increasing alienation between large sectors of American Jews and Israel, because of the rabbinate's positions and its control over the political sphere in the Jewish state.

The prime minister cancelled the conversion reform, announced shortly before the last elections. This is why his plea to the Jews, asking them to come to the aid of Israel - which questions the legitimacy of their Jewishness - only deepens the divisions in the Jewish Diaspora, precisely at a time when the prime minister seeks to unite the ranks. A hint of what can be expected in the next two months can be found in an article published last week by Iranian Foreign Minister Mohammad Javad Zarif, in which he asserted that now that the Iranian nuclear problem has been resolved, it is time to turn to the "Israeli nuclear program," as he sees it. Israel will need Obama's firm support on this issue in the international arena, as Congress would not be able to play a part.

During the United Nations' 2015 Non-Proliferation of Nuclear Weapons (NPT) Conference, Egypt promoted a resolution to restart discussions on declaring the Middle East a nuclear-free zone. Several months ago, the prime minister called US Secretary of State John Kerry and thanked him for the American help, which played a significant role in thwarting that initiative. So before we accelerate the campaign in America - we ought to stop, lest we it comes back to hurt us in the future.