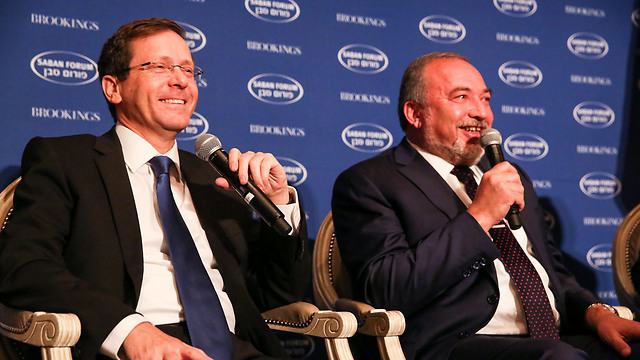 Analysis: American administration officials learned an important lesson from Israeli officials at Saban Forum this past weekend: As far as Israeli government is concerned, two-state solution is dead. Nonetheless, Americans will keep holding on to this formula, as it's easier than searching for other solutions.

WASHINGTON - There is something about the US presidential race that surrounds the candidates with a certain aura, a presidential aura. This has yet to happen to the candidates on the Republican side, but it has happened to Hillary Clinton, the leading candidate on the Democratic side.

On Sunday, Clinton delivered the speech which concluded the Saban Forum discussions in Washington. She demonstrated authority, eloquence, knowledge of the details, experience, pragmatism.

What she said about the issues on the Middle East's agenda doesn’t say much about her decisions if and when she becomes the president of the United States. She is not there yet, and if she gets there, she will see things she can’t see from here.

She read her remarks from the two teleprompters placed in front of her, careful not to harm her election campaign or embarrass the Obama administration, several hours before the president's dramatic address to the nation following the deadly attack in San Bernardino, California, which has been attributed to the Islamic State.

Herzog and Lieberman at the Saban Forum. General agreement about the two-state solution (Photo: Ralph Alawang)

Clinton presented views which are the consensus among her party's voters: An uncompromising war on ISIS but minimum intervention by American forces on the ground; pursuing the ouster of Syrian President Bashar Assad, but cooperating with Russia and with Iran; a battle against Iran, but support for the nuclear agreement; firm support for Israel - militarily, diplomatically, morally - but expressing weak reservations over the settlement enterprise.

Clinton is playing cautiously, trying to maneuver between conflicting demands and interests. The problem is that there are so many of them.

In between, she spoke in her practical, lawyer way, in favor of the Palestinian Authority and Palestinian President Mahmoud Abbas. She said she knew there were many problems caused by the views he expressed, but added that "the alternative for Abbas could be the black flag of ISIS. What is the alternative? Who is better?"

The Saban Forum aims to bring together prominent public figures from the US and Israel for discussions focusing on the relations between the two countries, the two governments. The gathering this past weekend was the 12th meeting. In some sense, it was the gloomiest, most depressing meeting.

Winston Churchill once said that the Americans and British are two nations divided by a common language. This statement echoes in today's situation between us and the American public. American is changing. Israel is changing. While we are fighting a common enemy - Islamic terror - the distance keeps growing.

US Secretary of State John Kerry addressed the Saban Forum on Saturday. In its Palestinian chapter, his speech included serious words of warning - some of them extremely correct - to Israel. Zionist Union leaders Isaac Herzog and Tzipi Livni or Meretz Chairwoman Zehava Galon voice similar warnings. But hearing them for the umpteenth time from the American foreign minister was embarrassing.

It was a whining, righteous, preaching speech. It's a shame that Kerry failed to memorize what Eli Wallach (Tuco) taught us in "The Good, the Bad and the Ugly" in his sophisticated way: "When you have to shoot, shoot. Don't talk." The Middle East, including Israel, doesn’t need an American foreign minister who knows how to lecture. It needs an effective foreign minister.

It was't just Kerry: Most of the American speakers, including Hillary Clinton, tried to convince the Israelis that their government's policy in the territories is leading Israel to a disaster. In response, the Israelis shrugged.

In previous years during the forum discussions, the Americans would discuss strategy and the Israelis would speak a common emotional baggage, shared values. This time it was the other way around: The Americans spoke, with a lot of concern, about the waning emotional baggage, the diminished values, the state which is losing its charm in the eyes of young Americans, including young Jews; the Israelis taught them strategy.

At the end of Kerry's speech, he was approached by Defense Minister Moshe Ya'alon for a handshake. The exchange of words between the two officials ended within three seconds - less than the contact between the coach of a winning basketball team and the coach of the losing team at the end of a game.

Ya'alon came to listen to Kerry as a gesture of reconciliation. He did it, as always, with a shy smile, almost blushing, on the background of Shimon Shiffer's report in January 2014 that Ya'alon referred to Kerry as "messianic and obsessive."

But there is no gesture of reconciliation, no weak handshake that can bridge between what Ya'alon is saying and what Kerry is saying. The disagreements allegedly focus on the Palestinian issue. In fact, they stretch over a much broader area, starting with the nuclear agreement with Iran to the administration's moves vis-à-vis the Islamic State.

The problem exceeds the crisis which broke out between the government in Jerusalem and the administration in Washington. The conflict between the two governments was a sort of road accident: The car was damaged, no doubt, but the main damage was sustained on the surface, not by the chassis. It is repairable.

What we should be concerned about is what lies ahead. There are two groups today which support Israel unconditionally: The evangelical churches and the non-haredi Orthodox. These two groups support Israel's policy with unusual devotion and without any reservations. They are joined by a few Jewish billionaires from the two parties. These groups' political influence exceeds their size by far, but in the meantime the public opinion's support is diminishing.

The American administration officials learned an important lesson from the Israelis this past weekend: As far as the Israeli government is concerned, the two-state solution is dead. When Prime Minister Benjamin Netanyahu talks about it, he is deceiving. Education Minister Naftali Bennett and former Foreign Minister Avigdor Lieberman said that somewhat cheerfully, Herzog and Livni regretfully. But there was a general agreement.

Nonetheless, the Americans will keep holding on to this formula, because they have no other formula, and it's easier to hold on to it than to search for other solutions. This acceptable lie will accompany us all the way to the next Saban Forum.