IDF soldiers Hadar Goldin (L) and Oron Shaul, whose bodies are being held in Gaza 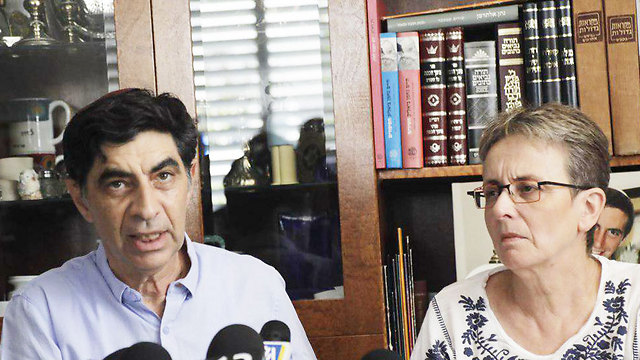 There’s no price for an IDF soldier’s blood

Op-ed: An Israeli soldier who goes out to fight knowing the army will do everything to bring him home, even if it entails a terrible price, will always be a better soldier—and we need better soldiers.

The conclusion usually comes at the end of the article, keeping the reader in suspense till the finale, but today we’ll start from the end: The bodies of Hadar Goldin and Oron Shaul most likely won’t be returned to Israel anytime soon, and Abera Mengistu and Hisham Shaaban al-Sayed, who are alive as far as we know, won’t be released from Gaza in the near future. The battered parents still have a long time to wait, and there’s even a possibility they’ll never stop waiting.

We Israelis are to blame for that. Since the state’s establishment, we’ve created a myth that body parts equal a body, and we definitely have no intention of leaving an Israeli soldier’s body in the hands of enemy forces. We fostered the myth that an IDF general deployed tank links on the Egyptian lines at night to rescue his son-in-law’s body from a tank, we rejoiced over the exchange of half a dozen living IDF soldiers for 1,150 living terrorists in the Jibril deal, and we turned Gilad Shalit’s family into a national icon with a deal to release 1,027 living terrorists, dozens of whom have resumed their terrorist activity. We did this.

Leah and Simcha Goldin may never stop waiting for the return of their son’s body (Photo: Shaul Golan)

We’re also the ones who set the price. We wanted to prove to the entire world that one Israeli soldier equals hundreds and even thousands of enemy hostages, thereby also setting a price tag for hostage and prisoner swaps. We showed the world what we’re made of. Now, it’s too late to back down. The Arabs have gotten used to the big numbers too, and even the Jews in Israel and abroad have realized the price of these deals will always be unbearable.

The question is what’s more important—Israel's image or the truth on the battlefield? The IDF and the State of Israel voted a long time ago in favor of Israel's image, so there’s no point in restarting the argument. During prisoner exchange negotiations, the Egyptians, Syrians, Jordanians and Palestinians were often heard saying: Do you really care if it’s 100 hostages less or 100 hostages more? You want to bring everyone back anyway.

Now, Israel is trying to turn back the clock. The Shamgar Committee’s recommendations and statements made by Knesset members and ministers and IDF commanders are aimed at paving the way. The Shalit deal offered its own contribution to the situation. The pressure of public opinion in Israel, which changed drastically following a successful PR and organizational campaign, brought the government and the prime minister to their knees. Shalit was returned, the terrorists returned to their nests, and it seemed everything had turned out well, if it were not for the Goldin and Shaul families who decided to infiltrate the public’s consciousness.

The calls to avoid such deals in the future should be countered, however, by another voice saying: We fostered this myth—and it’s a good thing we did. I believe swapping the hostages at the time was the right thing to do and there’s no price for an IDF soldier’s blood. No matter what happens, the required price should be paid for the simple reason that IDF service is mandatory and soldiers are not asked whether they would like to participate in a battle in which they could be killed or taken captive. The state’s duty is, at the very least, to return their bodies to the suffering families.

The terrorists’ high price should not deter decision makers from proving what no longer needs to be proved: The IDF does everything, and will do everything, even if it entails a terrible price, to bring the children home safely. A soldier who goes on out to fight and knows this in advance will always be a better soldier—and we need better soldiers.