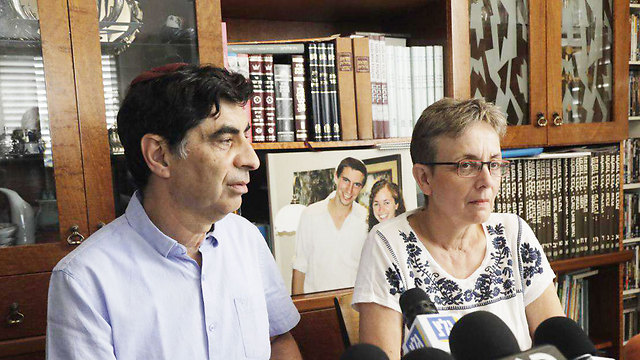 Leah and Simcha Goldin—the parents of fallen IDF soldier Lt. Hadar Goldin—call Def. Min. Lieberman a coward after he urges PM Netanyahu to hold off on naming new chief negotiator for release of their son's body, demanding that Israel take a tougher stance with Hamas.

Leah and Simcha Goldin—the parents of fallen IDF soldier Lt. Hadar Goldin—angrily responded on Sunday afternoon to Defense Minister Avigdor Lieberman's statement from earlier in the day, who urged Prime Minister Benjamin Netanyahu to not immediately appoint a new head negotiator to bring Israelis captured by Hamas, both those alive and dead.

Hadar Goldin, together with Sgt. Oron Shaul, are believed by the IDF to have been killed during Operation Protective Edge in 2014, with their bodies held by Gaza-based terrorist group Hamas. For the past three years, Israel has been negotiating with Hamas to return their remains.

L to R: Goldin, Shaul, believed to be dead; and Mengistu, one of three Israelis still alive in Hamas captivity

In addition to the two fallen soldiers, three Israeli citiziens are currently held by Hamas, after apparently jumping voluntarily over the border fence with Gaza: Abera Mengistu, Hisham al-Sayed and Jumaa Ibrahim Abu-Ghanima. All three are reportedly suffering from mental illness.

Israel's chief negotiator with Hamas for captured Israelis, Yair Lotan, resigned from his post last week, explaining that holding said position for years has been personally wearing on him. The Goldin family reacted to his resignation by demanding that a new chief negotiator be immediately named in his stead. Lieberman, however, asked Netanyahu not to name Lotan's replacement before a new set of guidelines is recognized for any future negotiations.

Speaking at a press conference set up in their family home in Kfar Saba on Sunday, the Goldins accused Lieberman of not putting pressure on Hamas to return Goldin and Oron's bodies, adding that "the State of Israel has a weak and cowardly defense minister."

"A defense minister that says the kind of things he said today, has no moral right to make decisions, to command an army or to lead a battle," said Simcha.

"This morning, the defense minister asked the prime minister not to appoint a new coordinator for the issue of the POWs and MIAs. I will allow others describe Lieberman's commitment to the IDF values, and refer to the matter at hand. Since the state's founding, Israel's policy on POWs and MIAs has always been determined by the prime minister. It is part of  the responsibility and authority that comes with the job. I appeal to Prime Minister Netanyahu: a new coordinator for the affairs of the POWs and MIAs must be appointed immediately. We cannot abandon Hadar and Oron Shaul for even one day.

"You must preserve the values ​​of the IDF and bring back Hadar and Oron. Our son is not a deal. I ask all the political forces: do not turn Hadar, our hero, into the price (we pay—ed). Our life is not something we can talk about in market terms. From the very first day we have demanded that this equation be changed, so that (Israel) will put pressure on Hamas."

The Goldins demanded that Israel take a tougher stance with Hamas. "Without pressure on Hamas we will never reach the Promised Land," added Simcha. "Lieberman knows our position very well. The reason for him not adopting it is because Israel has a cowardly minister of defense. He is good at talking and weak when it comes to action. We demand to implement the (Security) Cabinet's decisions from last January, namely, that the bodies of Hamas terrorists not be returned, that all (Hamas) prisoner visits be immediately stopped. Gentlemen, it is time to put an end to this 'summer camp.'"

Speaking after him, Leah Goldin said that Lotan's resignation indicated he had received not received political backing on his mission to return the bodies and captured Israelis. "With Lieberman's statement, everything is clear," she noted.

Leah recounted a private conversation they had held with Netanyahu following a memorial service for fallen soldiers. "We wanted to know what was going on. Remember, this event was immediately after the Turkish agreement (where Israel apologized for the Gaza flotilla incident, in which Turkish activists dies after attacking IDF soldiers, and on which it was hypothesized that Goldin and Shaul's bodies might be returned as part of the Israel-Turkey reconciliation deal). We were promised that Hadar and Oron would be part of that agreement."

"During our conversation, he (Netanyahu) approached us and asked for our opinion on the discussion that is going to be held in the cabinet regarding the Shamgar Report (which reportedly called on the government to cap the lenghts to which any future deal might go to in working for the release of captured Israelis, alive or dead). I looked him in the eyes and told him: 'We don't change the rules while there are soldiers in Gaza.' The prime minister immediately replied: 'You're right, and I am committed to this matter.' Since then, the prime minister has adopted this position. Since that meeting, Netanyahu has kept this promise. I ask the prime minister to continue to stand by it. Appoint a new coordinator and restore Hadar and Oron to us and to the Israeli people. "

Responding on Sunday to Lotan's resignation, Lieberman voiced his concern that Israel would find itself in a similar position to that of the Gilad Shalit deal, in which Netanyahu agreed to free over a thousand convicted terrorists for the return a single—living—soldier.

Shalit prior to his release from Hamas captivity

"I accept with understanding and love the criticism by the Goldin and Shaul families and continue being personally committed to returning home Hadar and Oron, as well as our other citizens being held in the Gaza Strip in violation of international law," Lieberman said Sunday.

However, while stressing that he considers returning Israel's soldiers and citizens home to be "of supreme moral and ethical importance," he added that "we must not return to the mistakes we made in the Shalit deal."

Lieberman noted that among the 1,027 terrorists released in the 2011 deal that saw captured IDF soldier Gilad Shalit returned to Israel alive were Mahmoud Qawasmeh, "who was released to the strip and funded the abduction of the three Israeli teens," and Yahya Sinwar, "who became the leader of Hamas in the Gaza Strip. It is the same Sinwar who is now setting strict demands that don't allow making any progress towards any sort of deal," Lieberman said.

Earlier this month, the Goldin family demanded that the government implement a cabinet decision to exert pressure on Hamas for the return of their son's body, threatening to  take legal action and appeal to the High Court of Justice if it is not done.