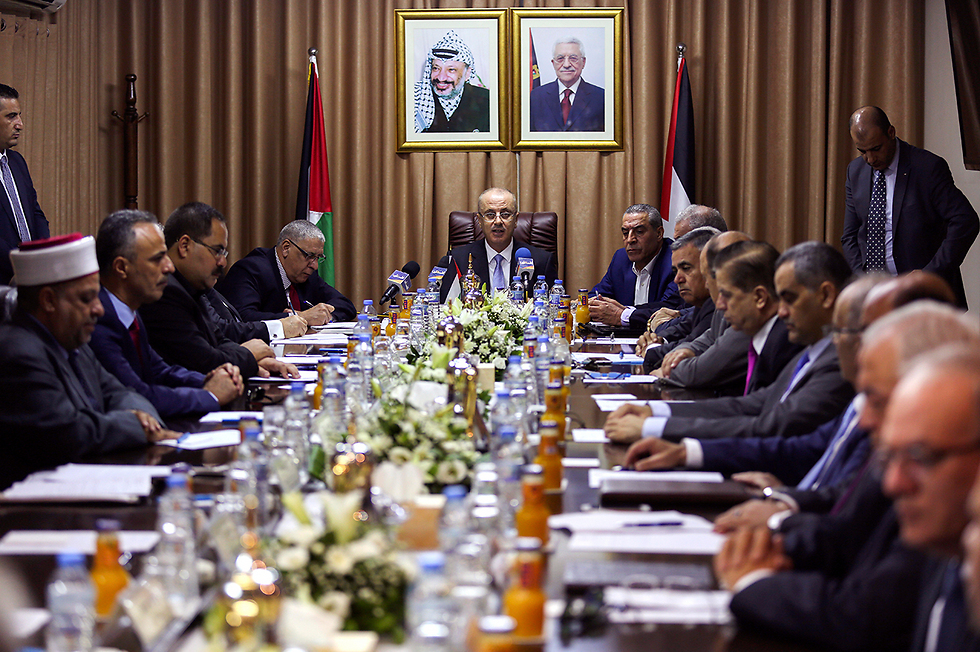 Gazans waited with bated breath for visiting Palestinian Authority (PA) Prime Minister Rami Hamdallah to announce the removal of the sanctions imposed on the Gaza Strip by President Mahmoud Abbas, who resolved Hamas must disarm before any reconciliation may be achieved.

Much to the Gazans' chagrin, and in spite of the positive airs surrounding the visit and the efforts Hamas has invested in ensuring its success, the sanctions remain firmly in place for now and the PA seems to be in no hurry to remove them.

The Fatah government's cabinet meeting in Gaza (Photo: AP)
Hamdallah arrived to the strip Tuesday morning heading a Palestinian West Bank delegation, visiting the isolated Hamas-ruled enclave for the first time since 2014 for a cabinet meeting symbolizing the PA's acceptance of civil sovereignty over Gaza. Security responsibility for the strip however, will be retained by Hamas. The government meeting is a symbolic highpoint since the announcement of a thaw in the freeze between the rival factions and the arrival of the Palestinian government to Gaza from Ramallah Monday.

Fatah's assumption of responsibility for Gaza will be closely monitored by Egyptian intelligence chiefs, including General Intelligence Directorate head Khaled Fawzy who also arrived there, after first meeting with Abbas in Ramallah. Fawzy will be accompanied by Palestinian intelligence chief Majid Faraj.

The road to reconciliation will apparently nevertheless not be an easy one. In an interview with an Egyptian media outlet Monday, Abbas clarified he does not intend to accept the Lebanese Hezbollah model wherein Hamas's military arm—or any other Gaza faction for that matter—is permitted to roam the area armed. "If anyone belonging to Fatah carries illegal firearms in the West Bank they'll be arrested. And that should precisely be the situation in Gaza. It should have only one weapon and one force," the Palestinian president said. Abbas did, nonetheless, insist that the PA is interested in achieving and implementing rapprochement with Hamas, and that this endeavor would only come to fruition by renewing the PA government's purview over the Gaza Strip.

"There can be no Palestinian state without completing reconciliation and unity. The government has returned to Gaza to carry out its duties. We have ideological differences with Hamas, but we can't deny the fact they're a part of the Palestinian people," Abbas said.

Gazans welcome the Ramallah delegation with photos of Abbas (Photo: AP)
"I personally am uninterested in running in the presidential elections, but if the people demand I do so, I'll comply with their wishes. I'm optimistic the day will come when we have an independent Palestinian state, but it won't be happening soon," he added, saying he was unsure when, if at all, he will visit Gaza himself. Despite Abbas's optimism, his statements on the matter seem at odds with those made by senior Hamas officials, including Mousa Abu Marzook's claim from several days ago saying Hamas retaining the "weapons of the resistance" is non-negotiable. After the various speeches and ceremonies, the more significant phase of the reconciliation will begin in earnest when Hamas and Fatah delegations sit down to hammer out the exact details of the agreement. Their discussions will not be held in Gaza or the West Bank, however, but in Cairo, far from the prying eyes of the media.