Op-ed: The truth must be told: Regardless of the new initiative's parameters, it won’t lead to an agreement. On the contrary, it will hinder the chances for an arrangement, because no matter what the US president offers the Palestinians, their answer is predetermined. They will say no.

Last week, in Washington, I heard from workers of research institutes that have the Trump administration’s ear that the president’s new peace initiative is about to materialize. Rumor has it that in the coming weeks it will be presented to the relevant parties.

Everything they know, and everything that has been published so far, is too vague for us to seriously address the new outline. At the moment, there is more to it than meets the eye.

But the truth must be told. Regardless of the new outline’s parameters, I can say with a great amount of certainty that the new initiative won’t lead to an agreement. On the contrary, it will hinder the chance for an arrangement, because with all due respect to Trump, he will not be reinventing the wheel, and no matter what he offers the Palestinians, their answer is predetermined. Not because the plan will be so bad. Not because it won’t give them a state. They will say “no” because it’s what they know how to say. So far, the only plan they have said “yes” to is the Saudi-Arab initiative. 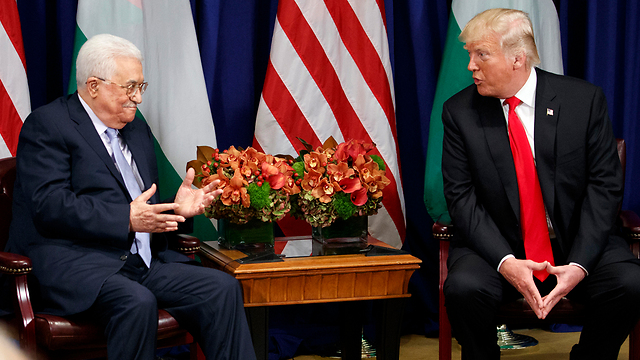 But in real time, at the negotiating table, the Palestinians rejected any initiative that did not include a mass return. Or as Nabil Shaath, the Palestinian Authority’s former foreign minister and a member of the negotiations team, said: “We mean two states—one Palestinian state and another binational state.” Shaath is considered one of the most moderate people in the Palestinian leadership. So regardless of the outline of the Trump administration’s initiative, the Palestinian response will be negative. It’s kind of difficult to understand how the smart people at the top of the American administration, both the previous and the current one, are finding it difficult to understand this issue. An Arab acceptance of the Trump outline won’t help either. At the time, there was a considerable Arab acceptance of the Clinton Parameters, but Yasser Arafat was unconvinced. He said no.

It’s possible that a two-states-for-two-peoples formula could have been reached two decades ago. In 1988, following American pressure, Arafat announced his recognition of Israel as a Jewish state. Seven years later, the Beilin-Abbas draft agreement was finalized, including no right of return to Israel. But that’s history. In the past two decades, the Palestinian stance has increasingly radicalized. The Palestinians have turned the refusal to recognize Israel as a Jewish state into one of their basic principles.

And another thing happened in the past decade. A massive system of post- and anti-Zionist propaganda, in the free world and in Israel, provides justifications for the hardening Palestinian stance. “The right of return must be recognized,” representatives of the progressive elites preach. With such a stance, these different “progressive” people are reinforcing the Palestinian rejectionist camp. Because if that’s what they are told by Uri Avnery and his ilk, in Israel and in the world, why should they present a more moderate stance?

Meanwhile, every failed round of negotiations only strengthens Israel’s radical Right, which mocks the efforts to reach peace. The result isn’t a stalemate. The result is a further expansion of the settlement enterprise, and not just inside the major blocs but outside too. The Palestinians are seeking one big state. And the radical Right, which is represented in the government, is becoming their executive wing.

That doesn’t mean we have to despair. It just means that instead of more peace initiatives, and instead of pursuing an agreement, which is unachievable under the current circumstances, there is a need to pursue an arrangement. For this purpose, the parties could adopt part of the outlines of peace initiative that were put on the table in the past and implement them, creating a demographic separation (including a complete stop to Israeli construction outside the blocs), with security control in the Jordan Valley and in other security points. “The commanders’ plan,” officially known as Security First, presents the outlines for such an arrangement.

It’s possible that, one day, the Palestinians will understand that their naysaying is only worsening their situation. But there’s no need to wait for the disillusionment. There’s no need to say that the day will come. There is a need to bring on that day. If the current government can’t do it, then maybe, just maybe, the next government will.