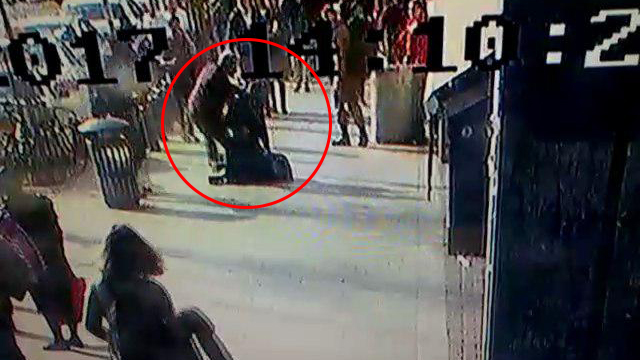 Taxi driver and retired policeman Yosef Ben Amo was praised for helping subdue terrorist who stabbed and seriously wounded security guard Asher Elmaliach, but security footage of the attack shows he was trying to stop security shift manager who was fighting the terrorist, as he thought he was witnessing a mere brawl.

The taxi driver who was praised for helping subdue a terrorist attacking a security guard outside the Jerusalem central bus station was actually hindering efforts by the security shift manager to neutralize the attacker, security footage of the incident has shown. Yosef Ben Amo, a retired policeman, said himself he had initially mistaken the incident to be a brawl, trying to pull the security shift manager away from the terrorist, who just moments earlier stabbed and seriously wounded 46-year-old security guard Asher Elmaliach.
Security footage of attack
X

The security shift manager knocked the terrorist to the ground and punched him repeatedly, which led Ben Amo to believe he was witnessing a mere scuffle.

Consequently, the security shift manager had to fight off Ben Amo while he was trying to subdue the terrorist. This went on until police officers arrived at the scene and intervened, helping neutralize the terrorist.

Ben Amo trying to pull security shift manager away from terrorist
"I was afraid for the security guard's life," the shift manager said, referring to Elmaliach. "I attacked (the terrorist) because I was worried there would be other innocent casualties."

Michel Ben-Baruch, the manager of the Jerusalem branch of the Mikud security company, said the shift manager "did not lose his cool and immediately started running after the terrorist. He caught up with him and put him down. He implemented everything he learned and was taught during the training he received."

“I saw a security guard running after someone. I didn't realize in the beginning that it was a terrorist. He jumped on him and I tried to separate them,” he recalled on Sunday evening. “At a certain point he told me that it was a terrorist and he had stabbed a guard. I bent over the terrorist, punched him below his belt and my finger was injured a little.”

Meanwhile, Asher Elmaliach, the security guard who stopped the terrorist from entering the central bus station with his body, remains in serious but stable condition.

He suffered stab wounds to his heart and had to undergo emergency surgery upon arriving at the Shaare Zedek Medical Center in Jerusalem. His life remains at risk.

Elmaliach's six brothers arrived at the hospital shortly after the attack. They asked the public to pray for him.

"It's a shock, there was a lot of crying when we entered the (hospital) room," said Helly Ben-Harush, Elmaliach's ex-wife.

She and their son Ofek learned of what happened from friends who recognized Elmaliach in videos of the attack in the media and online.

"He's a charming man, rare, very attached to his son and me. We stayed friends despite the divorce, we're still a family," she told Ynet.

Elmaliach's son, Ofek, said, "I know he did it to stop a more serious attack. I guess the terrorist seemed suspicious to begin with, and he wanted to enter the central bus station to carry out a mass attack. My father decided to risk himself to save others."