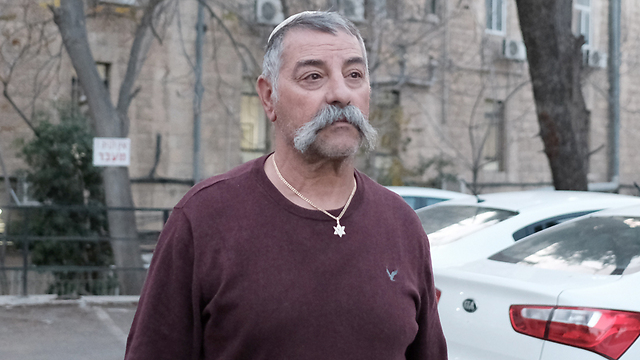 Man who helped subdue terrorist 'didn't hesitate for a moment'

Yosef Ben Amo, the cab driver and retired cop who helped apprehend a terrorist who seriously wounded a security guard at Jerusalem central bus station, recalls how he 'punched him below his belt. I didn't hesitate'; receives certificate of honor from police, city mayor.

The cab-driving pensioner and retired policeman who helped to neutralize the terrorist who stabbed and seriously wounded a security guard outside the Jerusalem central bus station Sunday afternoon said he “ never hesitated for a moment” once he realized a terror attack was taking place.  Yosef Ben Amo from Gilo described the events as they unfolded when he helped apprehend the terrorists who stabbed Asher Elmaliach, a 46-year-old security guard, before attempting to flee the scene.
Arrest of the terrorist after the attack    (צילום: דוברות המשטרה)
X

Arrest of the terrorist after the attack

“I saw a security guard running after someone. I didn't realize in the beginning that it was a terrorist. He jumped on him and I tried to separate them,” he recalled on Sunday evening.

Yosef Ben Amo (Photo: Yoav Dudkevitch)
“At a certain point he told me that it was a terrorist and he had stabbed a guard. I bent over the terrorists, punched him below his belt and my finger was injured a little,” he said about his actions, which earned him a certificate of honor from Jerusalem District Police Commander Yoram Halevi and from the city’s Mayor Nir Barkat. “He was running in my direction when I noticed that the security guard was also chasing after him and knocked him over and at that point I joined the pursuit and I stopped him,” Ben Amo continued.

(Photo: Israel Police)
“Later more police arrived and took him to the side where they searched him again and checked if he had anything else on him. After making sure there wasn't anything else, they took him to the police station to continue the investigation.” Asked whether he had given a second thought to confronting the terrorist, Ben Amo said: “I’m not scared of anyone. I am extremely extremely resilient thank God and I didn't hesitate for a moment. The second I became aware it was a terrorist I didn't hesitate.”

Ben Amo also said that the terrorists did try to fight back, but that he couldn't because “I neutralized him extremely quickly.”

Halevi praised Ben Amo for his actions. “We have a great (security) apparatus in the population, in the public, in the civilians and it begins with the security guard, a real hero, the first who immediately ran after the terrorist was a civilian and police,” he said.

“This is the only place in the world that when there is an incident people don't flee, but rather they run and respond,” he added.

“The guard responded within a second, ran and caught the terrorist and after him a civilian came and a second later the police came. Everyone played his part for public security and we have a lot to be proud of in this city in all respects.”