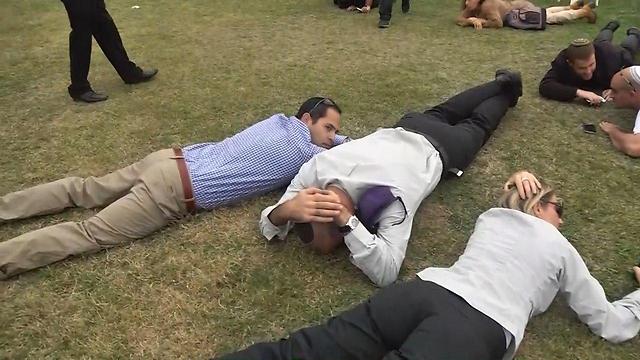 Analysis: Rockets fired from Gaza on Friday afternoon were clearly a planned attack on Israeli government symbols, but IDF's response this time was minor; while Israel keeps insisting that Hamas is deterred, 30 rockets fired over the past month alone indicate army may be misreading situation in strip.

Unlike the impression some people have been trying to create here, Friday’s rocket fire was worse than all previous incident over the past few weeks.

For the first time, the rockets were fired in the middle of the day rather than at night, and during an event organized by the family of fallen soldier Oron Shaul, which was also attended by Knesset members, IDF officers and government symbols. And what about the Israeli response? It was the weakest we have seen so far.

We have heard many belligerent statements in recent months about the Israeli response against Hamas, but the response to the firing of three mortar shells at the Gaza border area on Friday afternoon was the most minor response so far and was quite unusual.

So far, in all the incidents that resulted in rockets landing in Israeli territory, the IDF responded twice: An initial immediate response against random Hamas targets using tanks or an aircraft circling in the air; and a night attack on Hamas targets to claim a price for the organization’s responsibility for the rocket fire. This time, our response—even after Saturday night’s strike on a Hamas observation post—was weak. Why? That’s unclear.

We don’t need the Israeli intelligence community’s confirmation to understand that Friday afternoon’s rocket fire was planned, as the event was public. And so, after rockets were fired at government officials, Israel is taking its foot off the gas but keeps insisting that Hamas is deterred. In actual fact, however, Hamas has lost its deterrence against the rebel Palestinian factions, while Israeli officials continue to claim that Hamas is still deterred by Israel—a claim which contradicts the reality of the past month.

Forty rockets were fired since Operation Protective Edge until the current escalation. Thirty rockets were fired in the past month alone. Even if senior defense establishment officials say the Israeli deterrence hasn’t worn off, reality proves otherwise, and it’s possible that the IDF—like in the days before Operation Protective Edge—is misreading the situation in Gaza. The Israeli assessments are that Hamas is trying to carry out attacks in Judea and Samaria and isn’t interested in a conflict in Gaza.

All this is less relevant, because it’s now clear that the desires don’t match reality, and that even if Hamas really wants to prevent the rebel factions from firing, it’s hasn’t been very successful. Israel, therefore, should address the acts rather than just the intentions and interests. Even if our decision-makers are convinced Hamas is interested in calm that would allow the organization to govern, it would have been enough for one rocket to have landed in the middle of the Friday’s event at Kibbutz Kfar Aza.

In general, the images coming out of that event do not serve the “challenged” Israeli deterrence—the new term adopted by IDF officials.

And one more word about the Iron Dome defense system: For different reasons, its interception success rate in the past month is different from its success rates during Operation Protective Edge. We saw it both on Friday and with the rockets fired at Sderot recently. There are professional explanations for that, but most importantly, we are learning we can’t expect hermetic protection—especially not in the Gaza border area.