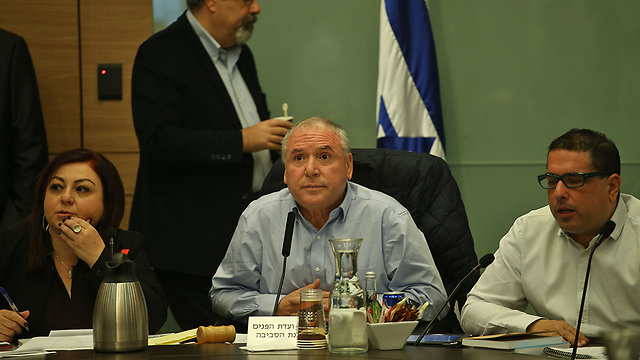 Fearing inability to gain majority due to absence of several of its members, the coalition postpones the vote on the contentious bill by a week; vote on bill to return MK Litzman to the Health Ministry is also postponed.

Tuesday's vote on the contentious Supermarkets Bill, which would give the interior minister authority to strike down city bylaws including ones allowing store openings on Shabbat, was postponed to next week.

The deferment came as coalition leaders feared they will fail to gather enough votes to pass the bill, which was set to be voted on Monday, as two lawmakers set to vote for it—Yehuda Glick (Likud) is mourning his wife who died on the morning of the vote, and Minister of Religious Services David Azulay (Shas) who is recovering from a medical operation—are currently on leave.

Additionally, the Yisrael Beytenu party, which is part of the coalition, openly opposes the bill and is expected to vote against it.

Coalition Chairman David Amsalem (C) at the Knesset's Internal Affairs and Environment Committee on a meeting discussing the bill (Photo: Ohad Zwigenberg)
The problem was further exasperated when, in a last-ditch effort to postpone the vote, both the opposition and the Yisrael Beytenu party, which is part of the coalition but opposes the bill, said they will not offset the vote of MK Glick. Vote offsetting is a common practice in the Israeli parliament, according to which a member of Knesset who cannot attend an important vote reaches an agreement with a lawmaker on the other side of the aisle that they would both not vote. "I deeply sympathize with MK Glick in his great sorrow over the death of his wife," Opposition Coordinator MK Yoel Hasson (Zionist Union) wrote on Facebook. "But the supermarkets bill is not urgent. We've lived without it for 70 years. There are no offsets, and the coalition can just postpone the vote—it's in their hands."

"Following the doctors' prohibition to release Azulai, who underwent complicated medical treatment, and following the fact that MK Glick is mourning his wife, and in the absence of any possibility of offsetting the opposition, especially Yisrael Beytenu, Shas and United Torah Judaism postponed the vote on the Supermarkets Bill to next week," Shas said in a statement.

Ahead of a vote on the legislation at the Knesset’s Internal Affairs and Environment Committee, coalition and committee chairman MK David Amsalem (Likud) submitted three new reservations to the bill: It would serve as a temporary provision and be limited to five years; it would not apply to free trade areas (specifically the tax-free city of Eilat); and it would not include convenience stores at gas stations.

The committee voted to adopt two of Amsalem's reservations to exclude convenience stores at gas stations and in Eilat from the bill. It then approved the bill for a Knesset vote.

But hours later, the previous version of the legislation—which does include convenience stores under the bill's purview—was approved after objections and pressure from the ulta-Orthodox parties.

"When you don't offset and refuse to give up, the coalition buckles and slowly breaks down," commented Zionist Union Charman Avi Gabbay. "We will continue to act with determination to prevent the Supermarkets Bill from passing simply because it is against the public and for politics."

In addition to the Supermarkets Bill, voting on the bill proposal that would allow the prime minister to give a deputy minister the same authorities as a minister, thus paving the way for United Torah Judaism leader MK Yaaokov Litzman to return to the Health Ministry, was also postponed to next week due to the same issues.