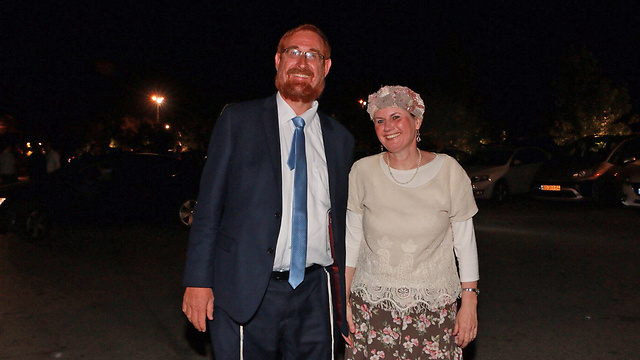 MK's wife Yaffa, who supported him throughout long recovery from nearly fatal shooting, passes away at 51 after 6 months in a coma; 'The love of my life has passed away,' Glick wrote on Facebook; she is also survived by their eight children, 2 in their foster care; PM, president offer their condolences.

Yaffa Glick, the wife of Likud MK Yehuda Glick, passed away early Monday at the age of 51 after six months in a coma.

Mrs. Glick, who supported her husband as he was recuperating from the attempt on his life,  is survived by her husband and their eight children, of which two are foster children.

"Yaffa, I love you," Glick said at the opening of his eulogy.

"Before I start talking, I must first ask for forgiveness. If there's anything you hated it was when I complimented you in front of others. But Yaffa, I have no choice," he said, going on to tearfully speak about her kind heart and compassion.

Sending his condolences, President Reuven Rivlin wrote, "My condolences go out to MK Yehuda Glick on the passing of his wife. I have followed her tragic story, as did the rest of Israel's people, and was in awe of her family's dedication. I embrace all of you."

Prime Minister Benjamin Netanyahu also expressed his sorrow, saying, "I spoke with our friend, MK Yehuda Glick, and gave him my condolences over the passing of his wife. Along with all of Israel, we mourn her passing and lend our support to his and his family's strength in this time of deep grief. May her memory be for a blessing."

Yaffa Glick had been comatose over the past few months and was intermittently hospitalized in Jerusalem's Shaare Zedek Medical Center and Misgav Ladach Hospital. Her funeral will be held at 3:30pm at Jeruaslem's Har HaMenuchot cemetery.

In more earthly affairs, the supermarket bill is expected to be put to a Knesset vote on Monday for its second and third reading. Opposition Coordinator MK Yoel Hasson (Zionist Union) has announced the opposition will not offset Glick's vote. "Let them delay the vote," he said. Yaffa Glick's medical woes began on a Friday six months ago, when the couple—who reside in the Otniel settlement—finished their Shabbat preparations. Yehuda Glick returned from a dip in a nearby pool and found his wife in dire condition, unconscious on the floor.

Glick's Facebook post announcing his wife's passing
His daughter had called in emergency services while Glick's son—a Har Hevron Regional Council emergency responder and a paramedic by training—heard the call go out on the radio while he was in his room and went out to help his mother. "My son was the first to begin treating Yaffa until the ambulance came," his father told Yedioth Ahronoth at the time. "There was immense shock," Glick said. "There were no outbursts of crying, but a lot of pain and shock. Our married daughter sent her children away to her mother-in-law, because she couldn't cope with it, while our youngest—who was on his way to friends—turned his car around and wanted to come back home. I told him he should continue driving, because there wasn't much he could have done." Paramedics tried saving Yaffa Glick in her home until Shabbat began, at which point they removed her to a hospital with serious brain damage. She had been in a coma ever since. "The ramifications of the brain damage are still in God's hands, and I'm sure Yaffa is negotiating with him about it right now," Glick said in the interview. "I look at her lying in that hospital bed with all the machinery around her, and think she's no longer in pain. At least she has found some rest." "Reality weighed too heavily upon her," her husband explained. "She was with me when the terrorist shot me and stood by me when my life was in danger. She has had a rough go of it since my recovery two years ago. Her father and brother-in-law passed away, a baby whose family she was caring for drowned in the bathtub and two neighbors who were very close friends of ours were murdered in separate terrorist attacks." "A third neighbor was killed in a car accident, and Yaffa took it very hard. Since my own attack, she took everything very deeply to heart," the now-widowed MK said.