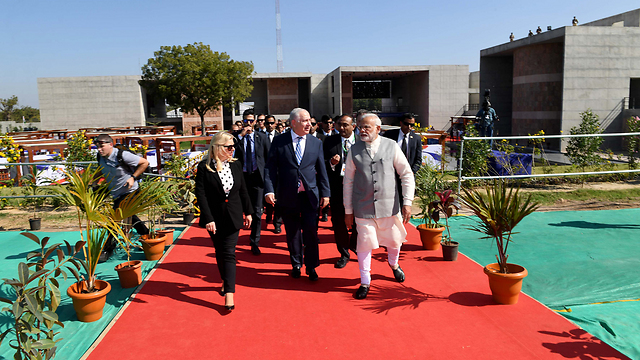 Modi to visit Palestinians, 'for balance'

As part of 'policy of separation' aimed at avoiding conflation of strong ties to Israel with lack of support for Palestinians, India’s PM Narendra Modi plans visit to Palestinian Authority in February.

Indian Prime Minister Narendra Modi will visit the Palestinian Authority (PA) in February, Indian media reported Thursday, where he will travel to and meet with PA President Mahmoud Abbas and senior Palestinian leaders.

Breaking with usual procedure, according to which India generally confirms official visits at the last minute, the reports are believed to be accurate.

During his visit to Israel in July, 2017, Modi did not visit the Palestinian Authority. To reach Ramallah on February 10th, Modi will have to pass through Israel. It was not immediately clear whether he will also hold meetings in Israel.

The Indian decision to visit the Palestinians is part of what the Indians term the "policy of separation" between good relations with Israel as well as with the Palestinians.

New Delhi also stresses that their good relationship with Israel will not come at the expense of the Palestinians, and that they will manage each of the relationships separately and independent of each other.

The trip comes as part of an effort to create a more balanced image of India's relations with Israel, which has experienced a a major boost under Modi's leadership. Seeking to emphasize the "separation," Modi's government let slip the intended visit to the Palestinian-controlled territories while Prime Minister Benjamin Netanyahu was still in India.