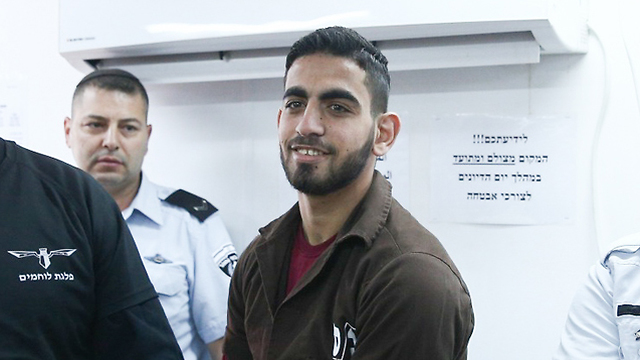 Terrorist Omar al-Abed, who murdered Yosef Salomon, his daughter Chaya and his son Elad in their home in the settlement of Halamish, gets 4 life sentences and ordered to pay family NIS 1.8 million in compensations; judge in minority opinion calls for death sentence.

Terrorist Omar al-Abed, who murdered three members of the Salomon family in their home in Halamish last year, was given four life sentences on Wednesday.

Al-Abed was convicted in December of three counts of murder after the July attack, which claimed the lives of Yosef Salomon, his daughter Chaya and his son Elad. He was also convicted of the attempted murder of Yosef's wife Tova, incitement and stone-throwing.

Al-Abed received three life sentences for the murders of the Israelis and a fourth for his attempted murder of Tova Salomon, who was wounded in the attack. He was also ordered to pay the family NIS 1.8 million in compensations.

The three-judge panel also demanded in their sentencing that the terrorist would not be released in any future prisoner exchange deal.

"These are very exceptional circumstances," wrote Judge Gilboa in the dissenting opinion. "The defendant, from the inception stage and until the criminal massacre, acted as one who wishes to carry out a slaughter. His offenses are among the gravest in the State of Israel's aw book. It follows that the defendant must be given the maximum punishment. The question arises whether it is enough to sentence him to a punishment that would result in him never again seeing the light of day, or whether the defendant must return his soul to his Maker."

"Throughout the trial, I watched him enjoy himself and smiling, even doing so in front of the family," Gilboa added. "I determine that the defendant's punishment is the death sentence."

Ahead of the sentencing, Elad Salomon's widow Michal and her father Dan Landa called for legislation that would deduct terrorists' salaries from the tax money Israel collects on behalf of the Palestinian Authority.

"Sadly, since (the attack) and until today, more good people have been added to the list of those murdered and wounded, and more families came under the cloud of pain. Just recently, we lost two amazing educators who could've shaped generations of students with values and culture," Michal and her father wrote.

"The State of Israel is facing the Palestinian Authority, which explicitly incites the murder of Jews through every means at its disposal. It created a delusional situation in which the murder of Jews has become an easy way of getting money, a solution for personal and social problems, and more," they accused.

"We asked the justice system and the government in the State of Israel to demonstrate determination and strengthen the deterrence of the terrorists, their families and those who aid them—with the death penalty, with home demolition, by revoking residency, and by handing down severe punishment to those who knew and failed to prevent."

Michal Salomon, who was able to save her children when she hid them in an upstairs bedroom, did not come to court for the verdict or the sentencing, because she did not want to see the terrorist's face.

In comments written ahead of the trial, Michal's father Dan Landa spoke about the pain the family has been dealing with since the attack and asked the judges to sentence the terrorist to the maximum penalty.

"Into the house burst the murderer, a black soul filled with a passion for murder, waiting for the moment it could kill and crush," Landa wrote. "Michal told us about the murderer's smiling face, which she saw as he broke into the house. A happy face indicating that this is not a believer about to fulfill a difficult duty, but an impulsive person eager to satisfy his passion. The villain raised the knife, stabbed and stabbed and couldn’t get enough of the bloodshed. If he hadn't been stopped by the bullet fired from soldier A.'s gun, we would be facing 10 graves today."

Following the verdict in December, Defense Minister Avigdor Lieberman tweeted: "A death sentence is the only proper punishment for such a despicable act. I call on the judges to demonstrate their courage and sentence the terrorist to death. Jewish blood isn't cheap! There is no room for terrorists, not even in our prisons."