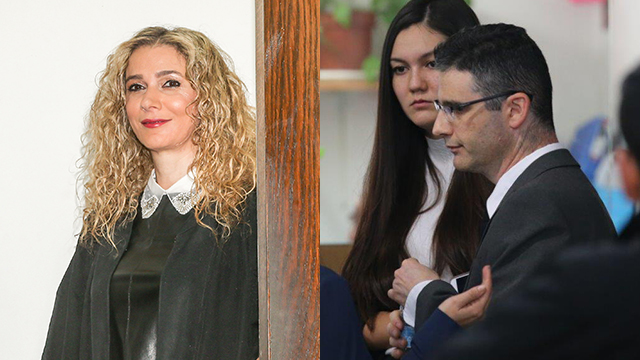 Attorney representing the state in Case 4000 made his stance clear to the judge overseeing the case on the remand of suspects detained in the affair prior to hearing on its extension, raising suspicions of conspiracy against the defendants.

In the correspondence, held on the WhatsApp Messenger app, Shacham-Shavit is seen telling Poznanski-Katz that the prosecution will seek an extension of remand for Bezeq shareholder Shaul Elovitch wife and son, Iris and Or, the latter of which was a member in Bezeq's board of directors, Bezeq Strategy and Business Development Manager Amikam Shorer and Bezeq CEO Stella Handler, ahead of Monday's hearing on the issue.

Judge Poznanski-Katz (L) and Attorney Shacham-Shavit (Photo: Motti Kimchi, Yariv Katz)
"Look surprised," he told the judge after informing her of the upcoming release of Or Elovitch and Shorer. "I am starting to work on an appropriate expression of total surprise," she joked in response. Shacham-Shavit then went on to reveal to her what the prosecution will ask of her in the coming hearing regarding the remand of Handler and Iris Elovitch. "Stella and Iris—we will ask (to extend their remand) for a few days tomorrow. They'll ask for 3 days, but you can certainly give two," Shacham-Shavit wrote, to which she said, "you continue to reveal everything to me and I will have to look really surprised." She later added that "perhaps the plan we thought about is not so far from reality," though it is not yet clear what she was referring to. "It cost me blood, they almost beat me or arrested me in Lahav," Shacham-Shavit replied, though this statement too is unclear. Following the publication, Justice Minister Ayelet Shaked (Bayit Yehudi) and Chief Justice Esther Hayut filed a complaint with the Ombudsman against the judge.

Meanwhile, Poznanski-Katz asked to step aside from the case, as the president of the Tel Aviv Magistrate's Court ordered her to be replaced as the judge overseeing it, appointing Judge Alaa Masarwa in her place.

The head of the ISA, Anat Guetta, called the incident "unusual and improper," and stated that the Authority will investigate it thoroughly and "with full transparency."

Attorney General Avichai Mandelblit and State Attorney Nitzan Shai ordered this evening, after consultation, and in coordination with Guetta, to open a disciplinary investigation into the Shacham-Shavit's behavior. They also agreed to remove the attorney from the case.

Shacham-Shavit informed Guetta that he is taking a leave of absence effective immediately until the end of the investigation against him.

Following the publication of the texts, the attorneys representing Shaul and Or Elovitch filed a request for their clients, as well as all other suspects detained in the affair, to be immediately released.

"It is hard to describe the magnitude of the shock, to which of course every decent person must be partner to, experienced when exposed to the secret conduct between the investigations department of the Israel Securities Authority and the judge," said the lawyer representing Shaul Elovitch, claiming it is now obvious their continued detainment is illegal.

The lawyer representing Or Elovitch called the incident "unprecedented" and one that "requires a thorough and in-depth investigation and harsh conclusions."

"The correspondence between the judge and the representative of the ISA polluted the legal process and demands the immediate release of my client," he said.

The police opined the case would not be harmed by the text messages, asserting that "the evidence will prevail."

Prior to the publication of the texts, Judge Poznanski-Katz extended the remand of former Bezeq strategic advisor Eli Kamir, who is also a suspect in the case, explaining her decision stemmed from his "significant" involvement in the affair.

and Roi Rubinstein contributed to this report.