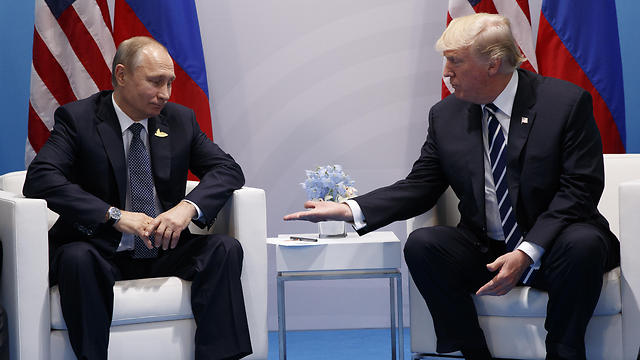 Russia says Trump invited Putin to US during phone call

US president reportedly made the invite during a phone call with his Russian counterpart as relations between the two countries grow increasingly frosty, telling him he would be happy to see him at the White House; Trump reportedly said he would also be happy to visit Moscow.

US President Donald Trump invited his Russian counterpart Vladimir Putin to the United States during a phone call, and said he would be glad to see Putin in the White House, RIA Novosti reported on Friday, citing the Russian Foreign Ministry.

"We proceed from the fact that the US president in a telephone conversation...made such an invitation, said he would be glad to see (Putin) in the White House, would then be glad to meet on a reciprocal visit," said Lavrov, according to a transcript of an interview with RIA on the foreign ministry website.

"He returned to this topic a couple of times, so we let our American colleagues know that we do not want to impose, but we also do not want to be impolite, and that considering that President Trump made this proposal, we proceed from the position that he will make it concrete."

Rolling out a welcome for Putin in the White House could anger Trump's domestic critics, who accuse Russia of hostile acts against Western countries, including the United States.

"I would simply turn your attention to the fact that Donald Trump after this phone conversation has said several times in both Tweets and in words that it is necessary to resolve issues with Russia, we want to have good relations with Russia, this is better than not having good relations, and that only a fool thinks otherwise," Lavrov said. "We also hear this."

Trump and Putin spoke by phone on March 20.

Lavrov was also quoted as saying that, prior to the US strikes on Syrian targets, Russia had told US officials which areas of Syria represented "red lines" for Moscow, and the US military action did not cross those lines.

He said that he was convinced Russian President Vladimir Putin and US President Donald Trump would not allow an armed confrontation between their two countries, RIA reported.

The developments take place as relations grow increasingly frosty between the US and Russia, with matters coming to a head after the US led a strike against military targets in Syria last Saturday in response for Assad's use of chemical weapons that killed dozens of people.

President Trump praised the "perfectly executed strike" in Syria carried out by Washington and its Western allies early Saturday. The attack promted a scathing response from Moscow, which accused the US and its allies of "diplomatic hooliganism" for their "blatant disregard of international law."