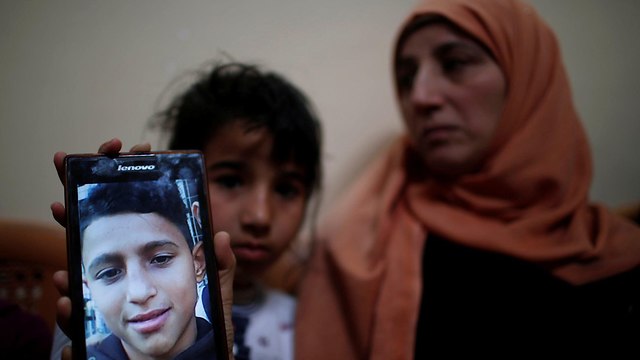 IDF says will thoroughly investigate death of teenager during Friday's border protests, accuses Hamas of intentionally endangering youth; teenager Mohammed Ayoub's mother says he slipped out of home to protests despite her pleas: ‘He told his aunt to tell me he would be back in an hour.’

Fourteen-year-old Mohammad Ayoub ignored his mother's objections and slipped away to join this week's protest along the Gaza-Israel border, just hours after Israel's military dropped leaflets in his Gaza village warning residents to stay away.

A few hours later, the teenager was killed by an Israeli bullet to the head, Palestinian health officials said.

"He asked his aunt to tell me he would be back in an hour," said his mother, Raeda, who instead buried her son late on Friday.

His death brought to 35 the number of Palestinians killed since border clashes intensified on March 30 in an ongoing protest known as "The Great March of Return"—evoking a longtime call for refugees to regain ancestral homes in Israel.

For a month, clashes had erupted at the demonstrations and Israeli soldiers had used live fire to keep Palestinian crowds away from its border fence. On Friday, Ayoub had been among the thousands who gathered to protest, some of whom used catapults and sling-shots to launch stones at Israeli forces, hurled burning tires and tried to damage the fence. Israel says it is doing what it must to defend its borders and accuses Hamas, the Islamist terror group which rules Gaza, of staging riots and using the crowds as cover to try to carry out attacks. Hamas denies this.

Friday's border protests again turned violent (Photo: IDF Spokesperson's Unit)
Israel's use of live fire has drawn international criticism and Ayoub's death received special attention. "It is outrageous to shoot at children! How does the killing of a child in Gaza today help peace? It doesn’t! It fuels anger and breeds more killing. Children must be protected from violence, not exposed to it," UN Middle East envoy Nickolay Mladenov wrote on Twitter. US Middle East envoy Jason Greenblatt put out his own tweet: "A full investigation by Israel of Mohammed Ayoub’s death is underway so that we will be able to understand what happened. As we mourn the tragic loss of a young life, we must all resolve to avoid causing more suffering by responses to his death." Ayoub's family said friends of their son told them he was not among stone throwers.

The IDF said it will thoroughly investigate the death of the teenager and added that Hamas “intentionally acts to endanger youth by sending them to the fence to serve as human shields for their agenda.”

An IDF Spokesman said, “There were violent disturbances Friday at the fence with about 10,000 participants, during which explosives and Molotov cocktails were hurled and attempts were made to damage the fence. Our forces used a series of measures to disperse rioters and in certain cases, when there was no alternative to stop the danger, they used live fire according to rules of engagement.”

The IDF stressed that any incident in which someone is killed by army fire is meticulously investigated by the relevant personnel and the findings are transferred to the Military Advocate General.

“The IDF is working on an ongoing basis to learn operational lessons and to reduce the number of casualties in the security barrier area,” the statement continued. “Unfortunately, Hamas deliberately and calculatingly endangers civilians. Every week it places young children, teenagers and women, at the forefront of the riots to serve as human shields for the Hamas agenda.”

“The IDF has repeatedly warned citizens against approaching the fence and against taking part in violent activities and terrorist attacks. The IDF will continue to act professionally and decisively to protect Israeli citizens and security infrastructures,” the statement concluded.

The methods used to carry out terrorist activities and damage infrastructure under the guise of smoke and demonstrations were clearly on display in a photograph disseminated by the army.

One squad consists of youths igniting security infrastructures, and another squad waits and pulls the damaged object by rope until it is uprooted. They can then proceed to infiltrate Israeli territory in order to carry out attacks in Israel.

The protests are expected to peak in mid-May when, according to Hamas leader Ismail Haniyeh, the Gaza scenes would be replicated elsewhere on Israel's frontiers.

Israel's defense minister on Saturday said the leaders of Hamas bore responsibility for Ayoub's death. "Those cowardly leaders who hide behind woman and children and send them forward as human shields so they can continue to dig tunnels and carry out acts of terror against Israel," said Avigdor Lieberman.

(Photo: IDF Spokesmans unit)
Hamas, designated a terrorist group by many Western countries, denies this. More than two million Palestinians are packed into the narrow coastal enclave. Israel withdrew its troops and settlers from Gaza in 2005 but maintains tight control of its land and sea borders. Egypt also restricts movement in and out of Gaza on its border. Matthias Schmale, the Gaza director of operations of the United Nations Relief and Works Agency (UNRWA), which provides aid to over half of Gaza's population, said Ayoub was the third student of UN-run schools to be killed in recent weeks. "Deeply disturbing news that child killed yesterday was yet another student at UNRWA school - two others were killed previously," Schamale wrote on Twitter. "Children should never be targets."