Lieberman on a tour of the Gaza border
Photo: Ariel Hermoni/Defense Ministry 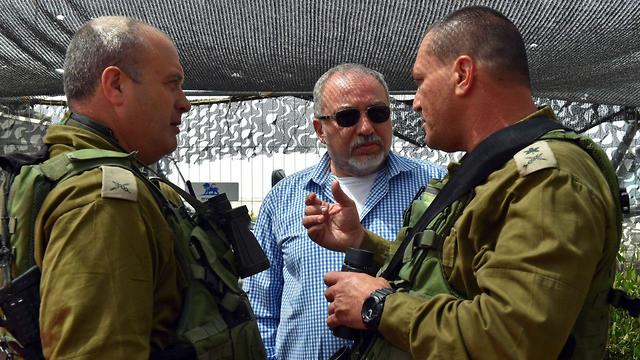 Lieberman: Hamas heads to blame for death of Palestinian teen

Defense minister blames the 'cowardly leaders who hide behind women and children and send them to the front as human shields' for death of 15-year-old Palestinian teen in Gaza clashes; Palestinians turn to UN Human Rights Council, demanding investigation into border killings.

Defense Minister Avigdor Lieberman said Saturday the only ones to blame for the death of 15-year-old Palestinian teen Mohammed Ayoub on Gaza border the previous day are Hamas leaders.

"It's those cowardly leaders who hide behind women and children and send them to the front as human shields, so they could keep digging tunnels and carry out terror attacks against the State of Israel," Lieberman said. "We already know from past experience the use of UNRWA facilities, hospitals and mosque for terrorism."

He went on to say that in Friday's clashes "We saw that the IDF is the most moral army in the world, which made the maximum effort to avoid hurting innocents. I once again tell the residents of Gaza, a secret for living long: Don't go near the fence."

Meanwhile, a video purporting to show the shooting has been making the rounds on social media.

Four Palestinians were shot dead by IDF troops on Friday during skirmishes with on the Gaza border, according to Palestinian sources.

The violence erupted following the renewal, for the fourth consecutive week, of the “March of Return” staged by the Palestinians in the coastal enclave in recent weeks, some 3,000 of whom have descended on the border.

So far, at least 32 Palestinians have been killed in the clashes over the past four weeks, with some 1,600 others wounded by live fire, according to the Gaza Health Ministry.

The European Union on Saturday called to launch a full investigation" into the death of Ayoub and three other Palestinians on Friday. "As we once again mourn the loss of lives, the EU calls on the Israel Defense Forces to refrain from using lethal force against unarmed protestors. As stated repeatedly, the priority now must be to avoid any further escalation of violence and loss of life," the EU said in a statement.

Mohammed Ayoub
The UN's Special Coordinator for the Middle East Peace Process, Nikolay Mladenov, called for an investigation of the "outrageous" incident. “It is OUTRAGEOUS to shoot at children!” Mladenov fumed in a Twitter post. “How does the killing of a child in Gaza today help peace? It doesn’t! It fuels anger and breeds more killing. Children must be protected from violence, not exposed to it, not killed! This tragic incident must be investigated.”

Jason Greenblatt, the American envoy to the Middle East, urged Palestinians not to respond to the death in order to avoid further escalation.

"A full investigation by Israel of Mohammed Ayoub’s death is underway so that we will be able to understand what happened. As we mourn the tragic loss of a young life, we must all resolve to avoid causing more suffering by responses to his death," he wrote on his Twitter.

The IDF has launched its own investigation the incident.

According to the IDF, a sniper in the Israeli army is given authorization to shoot only from an officer at the level of a battalion commander or above. In such a case, they are permitted to open fire on a “central instigator,” aiming at his ankle or below his knee. Full data on each sniper fire is recorded in real time via the rifle's telescopic sights lens.

The Palestinians said Friday they want the UN Human Rights Council to establish a commission to carry out an independent investigation of the killing and wounding of Palestinians during the Gaza protests.

Riyad Mansour, the Palestinian UN ambassador, said his counterpart in Geneva will start the process early next week with initial consultations that will hopefully culminate in an emergency meeting of the rights council and approval of a resolution authorizing a body "to investigate these crimes."

"It seems that the Israeli occupying forces are not restraining themselves, they're not listening to anyone and they are continuing with this massacre," Mansour told reporters.

Israel's UN Ambassador Danny Danon said in a statement late Friday that "Hamas is continuing to instigate violence against Israel as rioters today used firebombs and other means in attempts to damage the fence and infiltrate our sovereign territory."

He called on all UN officials "to condemn Hamas for encouraging violence, promoting instability and for the despicable act of exploiting women and children by placing them in harm's way."

Palestinian rioters on the Gaza border

The UN Security Council has not commented on the protests because the United States, Israel's closest ally, has blocked proposed statements supported by most members critical of the high death toll and Israel's use of force against protesters.

With Security Council action blocked, the Palestinians are turning to the Geneva-based Human Rights Council where there are no vetoes. Mansour noted that in the past, the Palestinians were successful in getting the rights council to authorize three different fact-finding missions and commissions.

He said the Palestinians will not accept an investigation announced by Israel into its military actions in Gaza because "it cannot be credible."

An investigation must be independent and transparent, Mansour stressed, as UN Secretary-General Antonio Guterres, other countries, and most recently six independent human rights investigators have called for.

The rights experts issued a joint statement on April 17 saying: "Despite Israel's commitment to investigate the events of the past few weeks, security forces continue to use live ammunition and rubber bullets against the protesters, killing and wounding dozens of mostly unarmed protesters, women, men and children alike."

The joint statement welcomed an Israeli probe, but said an independent investigation "is the only way to truly address what has happened in Gaza, and to prevent its recurrence."

The investigators cited reports that some Israel officials suggested the purpose of the Israeli probe is "to avoid scrutiny" from the international community and the International Criminal Court.

ICC prosecutor Fatou Bensouda called for an end to violence in Gaza on April 8, noting that the Palestinian territories were subject to a preliminary examination by her office, and she was monitoring events there closely.

Under the Rome Statute that established the ICC, the court won't assume jurisdiction if there is a national investigation, a point Mansour stressed.

"I believe that Israel recently announced that it will investigate its conduct precisely not to allow the ICC to proceed with an investigation," he said.