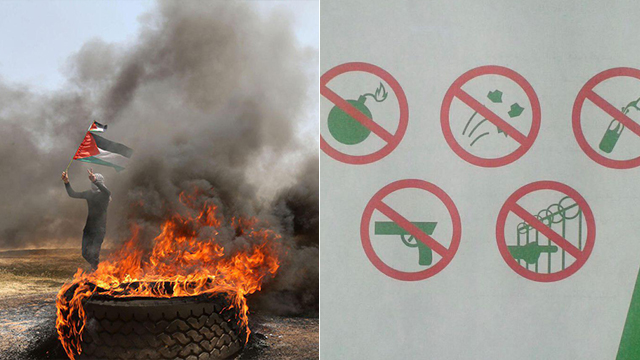 As Israel braces for fourth wave of protests, army drops leaflets for first time since weekly 'March or Return' demonstrations began, urging Gaza residents not to approach the border fence, warning that 'Hamas is using you' and promising the 'IDF will act against any attempt to damage the barrier.'

The IDF dropped leaflets on Gaza on Friday morning, warning Palestinians not to approach the border fence with Israel, not to attempt to damage it or carry out terror attacks. The IDF has once again beefed up its deployments on the border in anticipation of a fourth consecutive wave of Friday protests as part of their “March of Return”, this time marking “Day of Palestinian Prisoners and Martyrs” which began this week.

(Photo: AFP, IDF Spokesperson's Unit)
It is the first time that the IDF has dropped leaflets from the air on the Gaza Strip ahead of the mass demonstrations on the border warning against public disturbances.

“You are participating in violent disturbances. Hamas is using you to carry out terror attacks. The IDF is ready for any scenario,” the leaflets read, which also contained pictures of objects and weapons and actions which the military has forbidden in the protests.

“Avoid approaching the fence and damaging it. Avoid using a weapon to carry out violent acts against the Israeli security forces and Israeli civilians. Keep away from terrorists and from people who promote disturbances and violence,” the leaflets instructed before warning that the army would not hesitate to respond.

(Photo: Reuters)
“The IDF will act against any attempt to damage the barrier and its components and any other military equipment. Hamas is using you to promote its own interests of the movement. Do not obey Hamas’s instruction that endanger your lives. There is another way. Your future is in your hands.” it added.

White House envoy Jason Greenblatt, a member of President Donald Trump's Mideast team, said on social media that Palestinians in Gaza have a "right to protest their dire humanitarian circumstances."

Organizers "should focus on that message, not stoke the potential for more violence with firebombs and flaming kites, and must keep a safe distance from the border," said Greenblatt, adding that "the cost of these demonstrations is too high in loss of life and injuries."

The Palestinians are expected to attempt to fly hundreds of burning kites over the border into Israeli territory after testing the latest weapon in its arsenal last Friday.

Screenshot from Islamic Jihad video
In the violence that has erupted on the border in recent weeks, civilians have been used as a cover for terror activities against Israeli security forces and against the border fence. “We will not allow an attack on security infrastructure, on the fence or on Israeli civilians and we will act against anyone seeking to harm Israel’s security,” the IDF Spokesperson’s Unit said in a statement ahead of the expected protests.

Screenshot from Islamic Jihad video
On Thursday, as the Gaza residents geared up for more protests, the military wing of the Islamic Jihad movement published a video in its latest psychological warfare campaign against IDF commanders and soldiers, which included images of soldiers in the crosshairs of a sniper.
Islamic Jihad video
X

The Coordinator of Government Activities in the Territories (COGAT), Maj. Gen. Yoav Mordechai, features twice in the video, which was likely filmed during mass demonstrations that took place in recent weeks as part of the “March of Return.”

The video, intended to illustrate the abilities of the snipers situated in the Gaza Strip to shoot Israeli personnel on the border, concludes in a message in Hebrew and Arabic, saying “You murder our people in cold blood and think that you are protected, when our snipers are directed at your senior commanders.”

Maj. Gen. Yoav Mordechai in the crosshairs of a sniper

Last week, some 10,000 Gaza residents assembled on Friday at the border with Israel to stage another protest as part of their "March of Return", with IDF soldiers responding with live rounds as protesters threw Molotov Cocktails and explosive devices.

The protests are to continue at least until May 15, the anniversary of Israel's 1948 creation. Palestinians mark the day as their "nakba," or catastrophe.

On Thursday, organizers moved sit-in protest tents, each set up several hundred meters from the border, closer to the fence. Organizers said they will gradually move the camps toward the fence until May 15, but have made conflicting comments about a possible mass border breach.