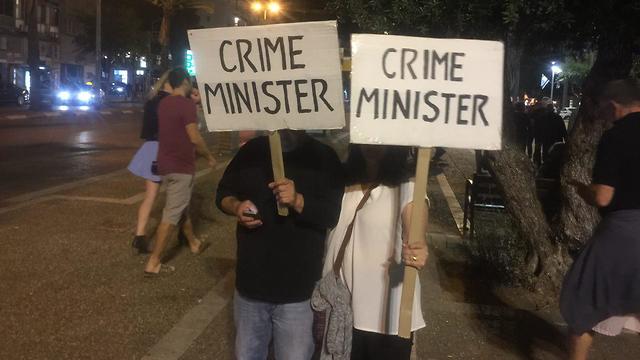 In Tel Aviv, demonstrators accuse Netanyahu of being 'against the state,' demanding: 'take your hands off the High Court'; in Haifa, protesters also lash out at Kahlon for 'leaving the elderly and disabled below the poverty line.'

Some 4,000 people marched Saturday night in Tel Aviv in protest against government corruption and Prime Minister Benjamin Netanyahu, under the headline, "Bibi, take your hands off of the High Court." Protests, carrying signs saying "Crime Minister," chanted "(Police Commissioner) Roni Alsheikh, is a darling, Bibi against the state," "Corrupt go home" and "Get out of our High Court."
Demonstrators protest against government corruption    (צילום: לביא נאור)
X

Irit Edri, 45, of Tel Aviv, has been participating in anti-corruption rallies throughout the year. "I have a babysitter that sets me back NIS 200 every Saturday," she revealed. "I'm here because it's the only democratic thing to do to denounce governmental corruption." "I've lived in England for 12 years and have chosen to live here, despite my British citizenship. My commitment is to leaving a better country to my children," she stated.

Roni, who has joined the protests only recently, claimed that the people were waking up especially due to the past week's events. "It's a fight for Israeli democracy, because we are a step away from becoming a dictatorship. Bibi has to understand that the 'sourpusses' half of the people will no longer remain silent," he exclaimed.

Citizens protest against attempts to legislate the override power bypassing the High Court (Photo: Roi Rubinstein)
Orly Zinger, 64, is one of the protest's organizers. "I guess there's a campaign of terror going on," she conjectured, "because it's impossible for Likud MKs to know Bibi and Sara and yet remain silent about the prime minister's conduct." "We were not surprised by the turnout," she said. "There's a feeling the public's beginning to wake up, but it's not enough. The more belligerence Bibi shows, the more the people will rise against him. I'm sure the torch lighting ceremony's saga and his theft from (Knesset Speaker Yuli) Edelstein will get people to take to the streets." Dan Adin, 47, said he went out to protest every Saturday for the past year, and sometimes even on weekdays. "I'm surprised that not everyone is here," he said incredulously. "People think someone will protect our democracy against Netanyahu. If we don't stop him, he'll do to our democracy what he did to Edelstein." "This man has no boundaries, shame or brakes. As it stands, unfortunately, no one in our political system can stand up to him or stop him," he lamented.

When they arrived to Rabin Square, protesters called for Netanyahu to resign and chanted, "Bibi is corrupt, you don't have the mandate" and finished by communicating a message to Netanyahu's loyal ally Culture Minister Miri Regev, by crying out, "Tonight, Miri, there really is something to be proud of," paraphrasing the minister's slogan for Independence Day celebrations.

In Jerusalem, demonstrators supporting the Zionist Union gathered in front of the Supreme Court to protest against coalition efforts to grant the Knesset override power to bypass High Court rulings.

Dozens also gathered in front of Minister of Finance Moshe Kahlon's home in Haifa to renew the disabled's protest, which ended last February after the Knesset approved an increase to disability benefits.

Activists from the weekly protests in front of the Attorney General Avichai Mandelblit's residence in Petah Tikva joined the protest in Haifa and called Kahlon to withdraw his support from the override power legislation.