The MSS system and the lookouts operating it
Photo: IDF Spokesperson's Unit 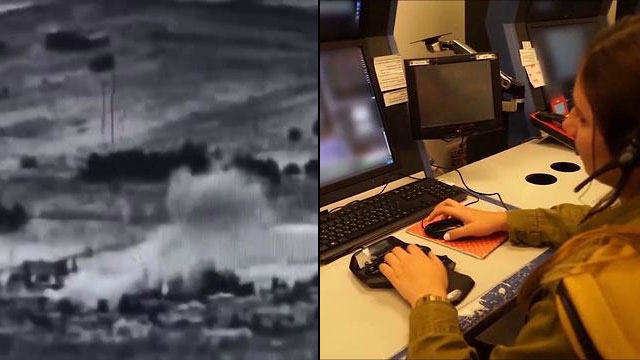 The IDF's eyes on Syria: the new system forewarning of Iranian retaliation

Ynet provides a special, exclusive peek at the advanced MSS, or multisensory system, deployed across Israel's northeastern frontier; as each suspicious occurrence is graded on a 1-10 scale, with a flick of their joysticks lookouts can spot rebels deep within Syrian territory down to the gun they're carrying.

The Syrian village of Al-Ahmadiyah sits on the road between New Quneitra—one of the last symbols of the regime of Syrian President Bashar Assad remaining in the Golan—and the southern part of the Golan Heights, which is controlled by the rebels. The road can be clearly seen from the top of the Israeli Hermonit outpost, at the slopes of which is the verdant Valley of Tears. Soldiers stationed in the Syrian army positions that surround Quneitra occasionally open machinegun fire at rebel vehicles going south, toward the villages Assad is planning to retake. Only three months ago, assisted by helicopters dropping incendiary barrels, was Assad's army able to conquer the region surrounding the town of Beit Jann in the Syrian Hermon—merely several kilometers away from the Israeli side of the mountain. Assad's current objective in the Syrian Golan Heights is to cut off the supply route passing through the aforementioned road.

A lookout using the MSS system and the view it affords of deep within Syria (Photo: IDF Spokesperson's Unit)
The echoes of a mortar bomb meeting its target can still be heard on occasion, drowning out the bucolic sounds of the western (Israeli) portion of the region. Observation from the Hermonit outpost is an easy one even without binoculars and offers a full view of the mushroom cloud appearing immediately thereafter, before it dissipates in the Heights' winds. Soon, however, the echoes of explosions may no longer be confined to the Syrian side of the border. An Iranian revenge attack for the strike on drone base the Islamic republic built near Homs—and which is attributed to Israel—may take the form of an antitank strike on IDF forces or a heavy barrage of rockets near the border. The soldiers tasked with recognizing such a strike and warning against it are the lookouts of the Golan Division. To carry out this momentous task, they have been outfitted with the most sophisticated of "weapons": a multisensory system (MSS), of which Ynet has been cleared to provide the first glimpse.

Lookouts observing the Syrian Golan (Photo: IDF Spokesperson's Unit)
The MSS is comprised of a series of poles affixed with state of the art radars and advanced cameras capable of shooting in both day and nighttime conditions, allowing the operation room's lookouts to scan and observe not only the Golan across the border, but also deep within Syria—and all with a flick of their joysticks. Deployment of the army's first MSS in the Syrian Golan was not coincidental. Hezbollah made a play for precisely that region four years ago but was thwarted by offensive actions—both overt and covert—attributed to the IDF. Since then, the war-torn country's various rebels groups—from the Islamic State through the successors of Al-Qaeda and the Free Syrian Army—have taken over most of the strip of land near the border Syria shares with Israel. While Assad is growing ever bolder in light of his impending Russian-assisted victory in the civil war, the Syrian Golan has still been rather low on his priorities list. While regime forces have even succeeded in taking the Syrian Hermon ridge in the past few months, they have yet to begin a significant maneuver southward, to the Heights' plains.

Soldiers work 4-hour shifts followed by 8 hours of downtime (Photo: IDF Spokesperson's Unit)
According to one IDF estimate, Assad's significant move to reconquer the Syrian Golan will be carried out either simultaneously or after he retakes the large community of Daraa near Jordan, which is also not far from the tri-border area with Israel.

Radars throughout the sector

Either way, the Israeli intelligence hold on the ground is becoming more and more tenuous. Dozens of armed groups the IDF has never encountered before, each armed with a different ideology that is not exactly Zionist, have staked their claim several hundreds of meters from the border.

These groups are joined by the regime's own militias, Iranian "advisers" and routine security officers from Assad's army, with no one on the Israeli side being able to surmise what relations with any of them will look like once the war comes to its inevitable conclusion. Commander of the Eagle Battalion 595 Lt.-Col. Nir Megidish, overseeing combat intelligence collection for the Bashan Division that has been tasked with defending the sector, said, "You can see tanks and APCs driving near the border fence and have to distinguish at a moment's notice who's a suspect and who isn't, who's about to point a barrel at you and who won't attack."

Lt.-Col. Megidish (R) speaking to Yedioth Ahronoth reporter Ron Ben-Yishai (Photo: Eli Segal)
Megidish has become one of the region's most tenured field officers, and has marked his fourth year in this sensitive role. Prior postings saw him taking part in creating the battalion that collects intelligence as to the goings-on in Syria in real-time. He added, "With all of the chaos in Gaza right now, they mostly have to deal with Hamas while the Galilee Division mostly faces Hezbollah. Here you have rebels armed with tanks positioning near the border with Israeli families hiking and Israeli farmers tilling their lands mere hundreds of meters away." "Calm has been maintained in the past three years just when the rebels controlled most of the border," he remarked. Senior IDF officials have been speaking about the moment the Syrian civil war trickles to Israel for the past five years, most likely in the form of a large-scale terrorist attack carried by a group infiltrating across the border.

(Photo: IDF Spokesperson's Unit)
The army's biggest fear is the Yarmouk Martyrs Brigade, which has since changed its name to Khalid ibn al-Walid Army. the group is affiliated with the Islamic State and controls the southern Syrian Golan Heights. Terror attacks were noted on the border from the war's outset, however, with combat soldiers wounded by the detonation of explosive devices and, in another instance, the death of an Israeli teen hit by an antitank rocket. The feared "mega-attack" has yet to take place, nonetheless, and tasked with blocking it are Lt.-Col. Megidish's orders to the MSS's lookouts—and to that end the army seems to have undergone a technological revolution of sorts. "The fence has been wired with different kinds of radars and the most advanced cameras," Megidish continued. "The MSS technology allows us to translate our operational priorities list—which we predetermine, who or what to track—into tasklist the lookout on duty receives."

The view the MSS affords is amazingly detailed (Photo: IDF Spokesperson's Unit)
"There are long stretches here on the Hermon without a fence acting as barrier due to the difficult topography, which makes control that much more challenging," the IDF official stated.

Lookouts can pick up combatants from kilometers away

The MSS enables to rank every suspicious spotting—such as any irregular movements—on a scale of one to ten, in accordance with a list of automatic criteria including intelligence alerts, the sector's history, distance from the fence and the type of object that triggered movement (vehicles, people or animals).

The system is so smart, in fact, it can recreate the path a Syrian vehicle took near the village of Hader, for instance, which ended up attracting the lookout's attention. The lookouts' keyboards are cutting-edge and tiny, and their joysticks are also smoother to control. A lookout constantly jumps from one point to another—examining a Syrian outpost and then zooming in on an Assad poster on the wall of a regime soldier's booth, with a tarp covering an armored vehicle not far away.

(Photo: IDF Spokesperson's Unit)
Flanking the lookout is the selector, who delves into suspicious points to decipher any irregular movements. The MSS allows them to complete actions in seconds—direct tanks, aircraft and precise fire. "The cameras we have here allow lookouts to pinpoint not only a combatant on the roof of a building several kilometers away, but also note exactly the kind of gun he's armed with," Megidish concluded. Six months ago, the sector came to the brink of combustion, with Majdal Shamas residents demanding to prevent a rebel-directed slaughter of their brethren residing in the Syrian-Druze town of Hader near the border. The IDF, and the elders of the village of the slopes of the Hermon, feared violent riots that will trickle into Syria. Materials documented and collected in the new observation operations rooms and then forwarded to Northern Command and heads of the Druze community helped ameliorate tensions. The lookouts' documentation showed rebels have not yet taken the town's outskirts, and the IDF's warnings of intervening to defend the Syrian-Druze sufficed to end the crisis without further escalation.

Lookouts' quarters resemble more hotel room than army barracks (Photo: IDF Spokesperson's Unit)
Motivation of the soldiers stationed as lookouts runs high, their commanders said, and it appears the IDF is going to great lengths to leave behind past imbroglios such as disobeying orders, abandoning bases and multiple complaints by lookouts due to the harsh conditions. Lessons, it appears, were learned: each lookout's shift lasts only four hours, after which she rests for eight, while some lookouts remain on standby.

(Photo: IDF Spokesperson's Unit)
Their residential complex, erected near the operations room, does not strike one as military barracks. Rooms are spacious and attractive, each outfitted with a shower and bathroom, like any hotel accommodation, as well as personal lighting fixtures and outlets near the beds and personal lockers for each soldier. Also on offer is a special menu, made up of dishes created to the soldiers' own specifications. Rice crackers will even be purchased, for the first time in the army's history, at the lookouts' behest. The army, it is evident, will go the extra mile for these soldiers, busy keeping Israel's northern frontier secure.