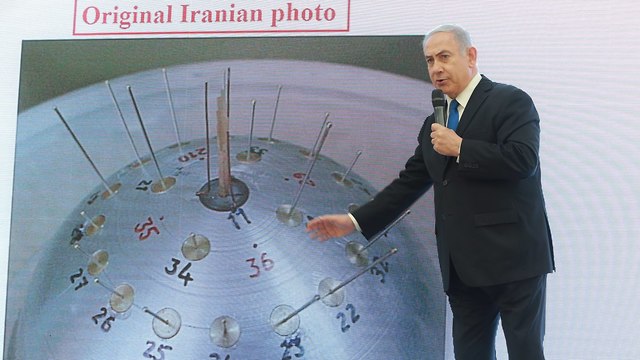 Netanyahu's impressive show might not be enough to convince Trump

Op-ed: The prime minister is asking the US president to do the right thing on Iran. Trump, however, is eyeing the Nobel Peace Prize. Oddly enough, this eccentric person who became the American president is on his way to making the world a better place. But if he cancels the agreement with Iran, the Nobel might slip away.

The world lies regularly. This fact was revealed once again on Monday in Prime Minister Benjamin Netanyahu's impressive presentation. The thing is that those who lie are usually well aware of it, even if they sometimes believe their own lies.

Netanyahu's nuclear presentation. Everything he said in the past was correct, but the world powers didn’t listen (Photo: Orel Cohen)

Nevertheless, under former US President Barack Obama’s leadership and in cooperation with other countries, they chose the lie. Everything Netanyahu said at the time was correct, but they didn’t listen. The intelligence information revealed on Monday was already on the table back then. Obama was aware of it, certain Congress members were aware of it, but that’s where they left it. They ignored it. Despite the risk in the agreement, Netanyahu chose—when he went to Congress—not to expose it to the public.

There is every reason in the world to hide intelligence information. Monday’s press conference revealed the Mossad’s tactical ability to infiltrate the most sensitive places in an enemy state, and Iran’s preventive intelligence services are likely searching for the Israeli sources as we speak.

Netanyahu may have made the wrong decision at the time. A presentation like the one we saw on Monday would have forced Obama to react. The thing is that time has passed, and the next date is solely for improvements.

President Donald Trump inherited an impossible situation from Obama. Since signing the agreement, Iran has enjoyed investments worth billions from China, Russia, France, Britain and other countries. No one has a real interest in popping this balloon. No one, apart from Israel and the Middle East’s Sunni states.

This is likely Netanyahu's last attempt to pressure Trump, to enlist the American public opinion, the president’s voters, to appeal to certain aspects in Trump’s personality—and get him to cancel the agreement. Not to improve it, but to cancel it.

Trump wants to leave something big behind (Photo: AFP)

Trump, however, is on his way to a Nobel Peace Prize. Oddly enough, this eccentric person who became the US president, the populist with countless skeletons in his closet, is on his way to make the world a better place. What’s happening in Korea right now is his success; and the Saudis’ willingness to openly discuss what they think about the Israeli-Palestinian conflict is a response to his presence in the White House. So is his willingness to move the US embassy to Jerusalem and to make gestures to Israel after years of pretend neutrality—it’s his and only his.

Netanyahu gave a great show on Monday, the kind of show Trump likes. Once the show was over and the stage was cleaned, we were left with the demand between the lines. Netanyahu is asking Trump to do the right thing in regards to Iran, even at the price of losing the Nobel Prize. Trump won’t make a commitment. It’s too much to ask for, even if he is promised the “Jewish Nobel prize” which was turned down by Natalie Portman.