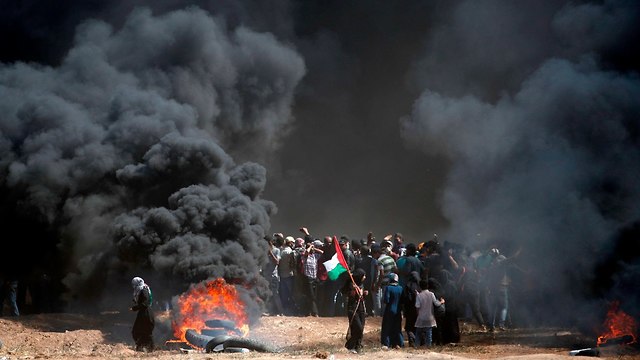 Tuesday's fence protests expected to be limited, as most events marking 51 years since Arab defeat in Six-Day war will take place on Friday in a bid to synchronize protests with 'Jerusalem Day' events in Iran; IDF presents grenades tossed at soldiers on Gaza-Israel buffer zone.

The coming weekend may indicate whether Israel and Hamas will be able to reach an arrangement securing a calm on Israel's southern border for a while, or whether the sides will face a war in the summer.

On Tuesday, the Palestinians mark Naksa Day, which marks the Arab defeat in the Six-Day War, 51 years after the occupation of the West Bank and Gaza Strip. IDF officials believe, however, that most of the protest clashes on the Gaza border will take place on Friday, in a bid to synchronize the events with the "Jerusalem Day" events in Iran, and that Tuesday's fence protest will be limited.

Both sides are at the peak of a flare-up, which began on Land Day in late March and has so far included mass protests, planting explosive devices on the fence, border infiltrations, sending incendiary kites across the border to set fire to fields in Gaza vicinity communities, and last week—rocket fire and extensive Air Force strikes in Gaza.

On Monday morning, an IDF force found a number of hand grenades, Molotov cocktails and a pipe bomb thrown by terrorists into the perimeter area (the buffer zone between Israel and Gaza), near the Karni Crossing in the northern Strip.

Molotov cocktail tossed by Palestinians into the buffer zone on the fence (Photo: IDF Spokesperson's Unit)

Dozens of explosive devices and grenades have been thrown on IDF forces in recent weeks, serving as evidence of the violent nature of the disturbances led by Hamas.

On Friday, the IDF will try to prevent the protestors from crossing into Israel while minimizing the number of Palestinian casualties, as killings could lead to retaliation in the form of rocket barrages, which could in turn spark an escalation or a war. The Gaza Division will be reinforced and snipers will deploy along the border. The forces will also deal with Palestinian cells attempting to plant explosive devices on the fence.

Naksa Day is expected to include spontaneous events without a call for a mass arrival of the strip's residents. The Palestinians plan to launch a symbolic motorcycle convoy towards the Erez Crossing. At the end of the procession, the organizers will announce their plans for Friday.

Coordinated display of hatred in Iran

This coming weekend, Iranians will mark "Jerusalem Day," a display of hatred for Israel and show of solidarity with the Gazans, and especially with the Palestinian Islamic Jihad, the Revolutionary Guards' branch in the strip.

The defense establishment sees the upcoming weekend as a crossroads in terms of the explosive Palestinian issue, as the Palestinian commemoration days which helped Hamas get tens of thousands of protestors to the border fence since March 30 are now over.

With the end of the "March of Return" campaign, and in light of the fact that violent incidents are taking place on the fence on an almost daily basis, it seems both Israel and Hamas will have trouble continuing the balance between them, especially as the humanitarian situation in Gaza keeps deteriorating four years after Operation Protective Edge, with no diplomatic-economic or military change in the horizon.

Hamas' frustration over the failure of its efforts to get hundreds of Gazans to cross the fence, which was reflected in the firing of more than 100 mortar shells and rockets last week, might indicate that the organization and the other factions in the strip have nothing to lose anymore.

In recent weeks, Israeli officials have been discussing an ease of a series of restrictions on Palestinians in the strip, like giving merchants permits to work in the strip, but these steps have yet to be approved and the stalemate in the peace talks since the fall of 2014 could bring the next conflict closer, whether Hamas or Israel are interested in war or not.

Hamas leader Yahya Sinwar, who was released in the Shalit deal after serving a long prison term for the murder of collaborators, has been marked by the Israeli intelligence community as radical yet pragmatic, mainly due to a number of decisions he pushed for, like the (failed) reconciliation with the Palestinian Authority.

The IDF believes that since Hamas has reached the lowest point since its establishment, this may be a good time to reach an Egyptian-brokered arrangement with the organization, which would include an ease of economic restrictions.