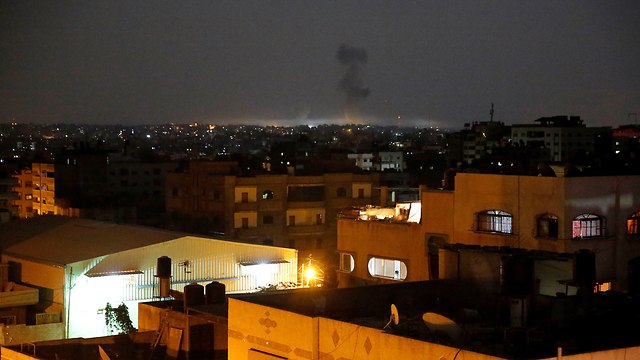 Gaza escalation: Both sides are walking on the precipice

Analysis: The IAF bombed dozens of targets in the strip on Tuesday. The mushroom clouds were impressive, but according to reports from Gaza, no one was killed or wounded. This shows that Israel, like Hamas, is choosing a limited conflict. Both sides are trying to play by the rules, but there is a great risk involved.

Three defensive objectives defined the IDF’s response to the Hamas marches: One, to prevent an infiltration of the masses and of terrorist cells into Israel; two, to minimize the number of casualties and property damage as much as possible, both on the Israeli side and on the Gazan side; three, to prevent the situation from escalating into a rocket war.

The rocket and mortar shell barrages that were fired from Gaza into the southern communities on Tuesday are alarming. Granted, it reflects a recognition of failure among Gaza’s ruling organization, after two months of clashes on the border fence. The attempt to market Hamas’ campaign as a civilian, spontaneous, non-violent move was unsuccessful. Overall, it was met with indifference both on the Arab street and in the international public opinion. Apart from Turkish President Recep Tayyip Erdoğan, no one believed Hamas’ new clothes.

IDF strike in Gaza, Tuesday night. The attempt to prevent the situation from deteriorating into a rocket war failed (Photo: AP)

But the failure was ours too. Those among Israel’s decision makers who refused to bury their heads in the sand knew that Gaza was on the verge of explosion. Nevertheless, the necessary decisions were not made. Tuesday’s events only strengthened the understanding that the status quo vis-à-vis Gaza cannot go on. Egypt, Qatar and the American administration are willing to enlist and broker talks, each with its own interests, but without a bold Israeli plan, which includes security risks as well, no good will come out of these efforts.

On Tuesday, at around midnight, the feeling among Israel’s decision makers was that we are not yet done: there is a need to deal Hamas and Islamic Jihad a few more blows to guarantee deterrence. Egypt has offered itself to help achieve a ceasefire.

A senior source on the ground described to me the chain of events on the Gaza front in the past few days. The obvious conclusion is that we may have been too successful. Three days ago, the IDF killed three Islamic Jihad terrorists near the fence; two days ago, the IDF killed two Hamas operatives. Islamic Jihad has a score to settle with the IDF. It has yet to avenge the death of 12 of its members in a terror tunnel last October. The IDF believes the two first barrages, at 7am Tuesday, were fired by Islamic Jihad without any coordination with Hamas.

The barrages were fired at the Gaza border communities. The Iron Dome and warning systems performed very well. One civilian was lightly wounded on the Israeli side.

A mortar shell fired from Gaza. Hamas is being selective (Photo: Roee Idan)

The day of fire in the south brings up a number of surprising facts: One, Hamas and Jihad fired mortar shells and rockets at the Gaza border communities, but avoided launching medium-range and long-range rockets. The conclusion on our side was clear: Hamas is being selective. It doesn’t want an escalation like Protective Edge or Cast Lead.

The IAF bombed dozens of targets. The mushroom clouds were impressive, but according to reports from Gaza, no one was killed or wounded. This shows that Israel, like Hamas, is choosing a limited conflict. Both sides are trying to play by the rules.

There is a big risk involved, however. If the mortar shell that hit a kindergarten in one of the Gaza border communities had been fired several minutes later, children and their parents would have been hurt and there would have been no escape from a ground offensive in Gaza. Both sides are walking on the precipice.

As it continues its activity in the air, the IDF is also preparing for riots on the fence. Givati fighters have replaced the Golani fighters. According to military estimates, the momentum of the “marches of return” is over, but the marches will continue and reach a renewed peak on June 5, Naksa Day (the day marking the Palestinian disaster in 1967).

The IDF took advantage of Tuesday’s events to destroy a tunnel uncovered in the strip two weeks ago. For the second time, the IDF uncovered a tunnel crossing three countries. The previous tunnel crossed from Gaza into Israel and ended in Sinai. The new tunnel crossed from Gaza into Sinai and ended in Israel. GOC Southern Command Eyal Zamir handed all the information about the tunnel to his colleagues on the Egyptian side. The expectation is that the Egyptians will deal with it on their territory.

The tunnel was dug in the past year, and they were still working on it in recent weeks. That is what's on Hamas’ list of priorities, and that’s what we have to deal with.