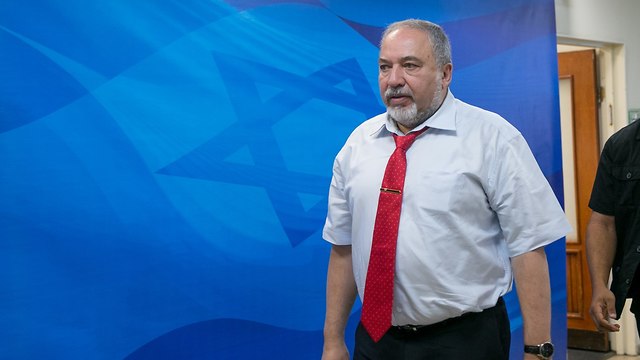 Addressing the Iranian population for the second time in two weeks, defense minister expresses admiration for their willingness to protest in the streets and voice anger over economic travails caused by Tehran selling them out for terror movements; 'Take responsibility for your own destiny.'

Defense Minister Avigdor Lieberman addressed the Iranian population on Thursday, saying that the regime in Tehran is sacrificing its people for terror and radical movements in the Middle East, making it the second time in two weeks that the Yisrael Beytenu leader has attempted to communicate directly with the people. “I have no doubt that you all see what correct economic policies really do and what benefits they can really bring to the Iranian people,” Lieberman said in a special interview with internet radio station "Fayam Ashrail" which airs daily news in Farsi and is transmitted to Iran. “I appreciate the Iranian people very much. Despite the cruel regime of oppression, the youth are protesting and making their positions clear. You have to admire them for their willingness,” he told his interviewer, Menashe Amir, who serves as the anchor of the Voice of Israel station in Farsi.

Defense Minister Lieberman (Photo: Ohad Zwigenberg)
“Iran is a country that sacrifices the lives of its citizens for terror and radical movements in the Middle East and not only in the Middle East. Despite all the difficulties, despite the unemployment, despite the economic situation, Iran has so far invested $14 billion in Syria,” he said, repeating a message he wrote on his Facebook page in Farsi at the end of June. “In 2018 Iran will spend $2.5 billion on supporting Hezbollah, on activities in Syria, on supporting Houthis in Yemen and Shi’ite militias in Iraq, as well as on supporting Hamas and the Palestinian Islamic Jihad in the Gaza Strip,” he continued. “Only recently, Quds Force commander Qasem Soleimani allocated $70 million to a series of measures and logistical operations in Syria,” Lieberman added as he echoed his Facebook post. “That says something about the priorities. Where is the citizen and where is the extremist concept that requires the Iranian regime to support terrorism and fighting in every corner of the Middle East?" he asked. In answer to the question of whether Israel is gearing up for war with Iran, Lieberman said that he hoped not.

Protests in Iran
“No one wants war. We want a strong economy, we want to promote science but we won’t agree under any circumstances to tolerating the presence of Al-Quds forces on Syrian soil. We will act extremely decisively to any attempt by Iran to entrench its military forces in Syria,” the defense minister vowed. Calling on the Iranian people to take responsibility for their own destiny, Lieberman urged them not to “leave it in the hands of the Al-Quds Forces or the Revolutionary Guards or any other radicals who only bring about disaster, suffering and more wars and deaths.”

Iran has witnessed in recent weeks a rare wave of protests in the wake of a weakening economy as US sanctions close in on the country following President Donald Trump’s withdrawal from the landmark Iranian nuclear deal.

Iranian President Hassan Rouhani said the fresh US sanctions were part of a "psychological, economic and political war", adding that Washington would pay a high price for its actions. He also blamed Israel for allegedly playing a part in the unrest.