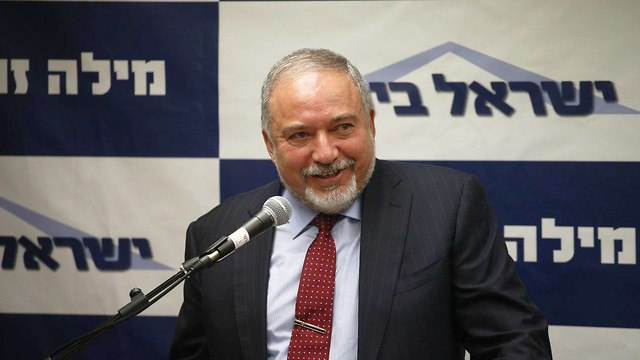 Capitalizing on Iranian displays of frustration as demonstrators protest outside parliament over economic downturn, defense minister seeks to galvanize public into more action as he accuses the regime in Tehran, in a Farsi post on his Facebook page, of diverting millions of dollars for terror activities.

Defense Minister Avigdor Lieberman addressed the Iranian people in Farsi on Tuesday, asking them “where your money is going” while accusing the regime in Tehran of diverting badly-needed funds for terror activities. “Where is your money going? To this day, despite the economic difficulties at home, the Iranian regime continues to invest billions in Syria, in Hezbollah, in Islamic Jihad, in Houthis in Yemen, in Shi’ite militias in Iraq,” the defense minister wrote on his Facebook in Farsi.

“In 2018, Iran committed to paying each organization $2.5 million. Until the present day, Iran has invested $14 million in Syria alone,” the message continued, a day after Iranians took to the streets and protested outside parliament against the economic downturn caused by looming US sanctions since President Donald Trump withdrew from the nuclear deal.

“Even last month, when you were fighting for your bread in the streets of Tehran, (Iranian senior officer) Qasem Soleimani took a series of measures, including logistical operations intended for Syria at the cost of $70 million,” Lieberman added.

Facebook post written in Farsi
Earlier in the day, it was reported that against the background of the rare wave of protest in Iran, the regime banned imports of more than 1,300 products and prepared its economy for the return of US sanctions. Iranian President Hassan Rouhani promised his citizens on Tuesday that the government would be able to handle the economic pressure of new US sanctions, a day after traders massed outside parliament, protesting against a sharp fall in the value of the national currency.

Protests in Iran (Photo: EPA)
Rouhani said the fresh US sanctions were part of a "psychological, economic and political war", adding that Washington would pay a high price for its actions.

"Withdrawal was the worst decision he (Trump) could make. It was appalling. It hurt America's global reputation," he said.

His country, he added, is in a "fight" with the US. In a televised speech, Rouhani blamed the US for Iran's woes.

"The US cannot defeat our nation, our enemies are not able to get us to their knees," he said.

Iran's judiciary chief warned on Tuesday that the "economic saboteurs", who he said were behind the fall of rial, would face severe punishment, including execution or 20 years in jail.

"The enemy is now trying to disrupt our economy through a psychological operation. In recent days some tried to shut down the Bazaar, but their plot was thwarted by the police," Ayatollah Sadeq Larijani was quoted as saying by Fars news agency.

Tehran's prosecutor Abbas Jafari-Dolatabadi said some protesters near the bazaar were arrested on Monday and would not be released before going to trial.

The Iranian government is implementing new plans to control rising prices, including banning, as mentioned, imports of over 1,300 products, preparing its economy to resist threatened US sanctions.

In late December, demonstrations which began over economic hardship spread to more than 80 Iranian cities and towns. At least 25 people died in the ensuing unrest, the biggest expression of public discontent in almost a decade.

Demonstrators initially vented their anger over high prices and alleged corruption, but the protests took on a rare political dimension, with a growing number of people calling on Supreme Leader Ayatollah Ali Khamenei to step down.