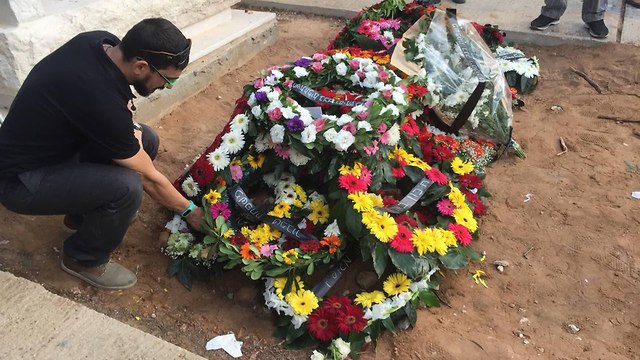 Hundreds attend funeral of Ziv Hagbi, 35, who was murdered in a terror attack at the Barkan industrial zone; 'I’ll take care of the family down here, until we meet again, brother,' his brother Or vows; 'I cannot describe what it’s like to live without you,' says second brother Itay.

Hundreds of people arrived at the cemetery in Moshav Nir Yisrael on Monday afternoon to lay to rest Ziv Hagbi, 35, who was murdered in a terror attack at the recycling factory in the Barkan industrial zone in the West Bank.

"You always wanted us to have quality time with the children. Where are you? How do we move on from this?" Ziv's brother Or said, struggling to speak through the tears. "I want this cruel joke to be over, come back please. Take care of us from above, and I’ll take care of the family down here, until we meet again, brother."

"I'm walking and crying. Words are not coming out. I want to awake from this nightmare so much and can't do it. I didn't want to become part of the bereaved," Or went on to say.

"Brother Ziv, I do not know how to start," said Ziv's second brother, Itay. "You’re the family’s successful brother, with whom I could always consult ... I cannot describe what it’s like to live without you. You gave us so much joy, and love, and laughter, and conversations. It’s unfathomable what happened. It is a sad and difficult day. We will always remember you."

Ziv's mother Iris described how she was trying to convince her son to move back to the moshav, where he was now being buried.

"I'm asking you Ziv to forgive me if I hurt you. Your father is standing next to me and cannot talk, we don't know how to cope," Iris said. "You left us three amazing grandchildren, and now we'll help Natalie (Ziv's wife) to get through this tough time."

Ziv's wife Natalie said that next week they would've celebrated 18 years together, half of their lives. "Our first and last love," she added. "Come back, love of my life. I'll love you forever."

Ziv's friend Alon Bar described him as "one part of five, the best among us, the glue that kept us together. Always smiling and laughing and thinking how we could meet more often so the children could play together."

"Natalie and the kids were his entire world," Bar continued. "In every decision he made, they were the main consideration."

The father of Kim Levengrond Yehezkel, the second victim of the attack, was also in attendance.

The Alon Group, which owns the factory that came under attack, decided to keep it closed on Tuesday as well. The management said a decision will be made on Tuesday on when to reopen it and resume operations.

An official in the factory's management said the security arrangements will be reexamined, while managers will have talks with the Israeli and Palestinian employees about the tragedy.

"Our goal is to remember what had happened and honor the memory of our friends, but alongside that we must return to our daily lives," the official said.

Ziv Hagbi's friend, Ronen, told Ynet that Ziv loved his job at the factory as an accountant.

"He studied for many years and he was ambitious to get ahead. He was a dear man. It's a tremendous lose," Ronen said.

"Ziv was supposed to celebrate his birthday on Saturday. He woke up, went to work—from which he will never return. His family is devastated," he lamented.

Rotem Elizera contributed to this story.