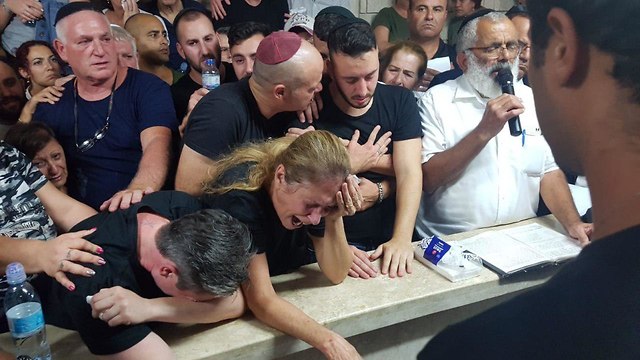 Family of the Barkan terror attack victim eulogize during the proceedings at Rosh HaAyin cemetery, promising she will never be forgotten; Kim’s father: 'I'm sorry I was not there with you’; Communications Minister Ayoob Kara attends ceremony on behalf of government.

Hundreds of people participated on Sunday in the funeral of Kim Levengrond Yehezkel, who was killed by Ashraf Na'alwaat in the terror attack at the offices of a recycling factory in the Barkan industrial zone.

The funeral took place at the Rosh HaAyin cemetery. Levengrond Yehezkel, 28, is survived by her husband Guy and a one-year and four-months-old son Kai.

Kim's family, including her parents and husband, eulogized at the funeral.

"I'm sorry I was not there with you. Unfortunately I couldn't make it in time. I promise you that Guy and Kai will have everything they need. I promise I'll take care of them the same way I used to take care of you. You can rest in peace,” said Kim’s father during his eulogy.

Kim's husband, Guy, said his wife will never be forgotten by either him or their son.

"I want to assure you that we will never forget you. We will raise our Kai just as you wanted, and you will always remain my best friend," he mourned.

Kim’s cousin Sean also shared the sentiments, saying “I wanted to say thank you for your friendship … and I promise you we will not forget you."

"I promised you that I would always watch over you, but this morning I didn’t make it in time. Your contagious laughter will never be heard again. I have always wanted to be more like you and to learn from you,” eulogized Kim’s cousin Sapir.

"I am here on behalf of the government to express my condolences to the devoted husband and the baby, who will not have the fortune of seeing his mother ever again," the minister bemoaned.

Earlier, Kim’s aunt, Yehudit, said she hopes those responsible for the attack are caught.

"Kim always had a smile on her face, she was sweet and loving. Momentarily, the skies shattered, but Kim will always be with us. I am angry, someone has to answer for this, and fast. Parents shouldn’t bury their children," the aunt added.

The IDF forces continue the manhunt for the terrorist with the assistance from the Palestinian security forces.

The terrorist arrived at the Alon Group factory, where he worked as an electrician, shortly after 7:30am Sunday. He hid the M-16 rifle he had brought with him under his clothes and apparently showed the security, at the industrial zone’s entrance, his work permit.

Upon reaching the second floor, where the factory’s offices are located, Na’alwa started running towards Levengrond Yehezkel, who worked there as a secretary and was sitting behind a table at the end of the corridor.

It is believed that once the terrorist caught up to Kim, he put her in handcuffs and fatally shot her. IDF believes it is also possible that he had handcuffed Kim after shooting her in order to prevent her from calling for help.

The terrorist then started advancing towards the office of Ziv Hagbi—whom he subsequently shot dead as well.

Hagbi will be laid to rest on Monday at 2pm.