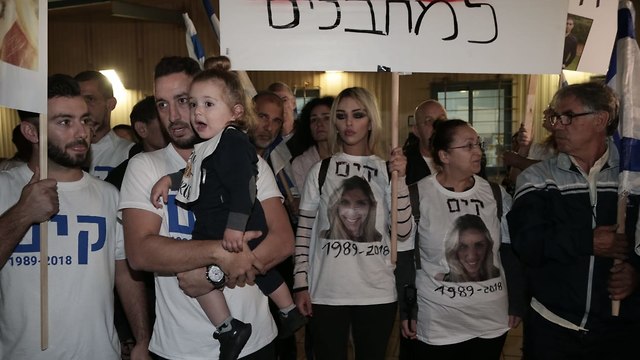 Some 700 of Kim Levengrond Yehezkel and Ziv Hagbi's friends relatives attend protest march, calling for capital punishment for terrorist Ashraf Naalwa, who is still at large; Kim's family walk with their hands tied, just as she was tied before being shot dead.

Some 700 friends and relatives of Kim Levengrond Yehezkel and Ziv Hagbi, who were murdered in the Barkan terror attack by Ashraf Naalwa last month, marched on Tuesday evening to the Alon Group recycling factory, where the deadly shooting spree took place, calling for harsh punitive measures against the terrorist, who is yet to be captured.

The marchers walked with their hands bound in cable ties, just as Kim Levengrond Yehezkel was bound before being shot dead by Naalwa.

"We don't want to hear more (empty) promises," he lashed out.

The order, which relates to the basement and the ground floor of the building in which the terrorist lived, was approved after the court dismissed Naalwa's family's reservations. However, the terrorist's family can still appeal the decision to the High Court of Justice (HCJ) until November 11.

Kim's father addressed the demolition order, urging the political echelon to "get the job done. Make the death penalty happen."

"We, along with the Samaria Regional Council, are launching a fight to establish an industrial area commemorating Kim and Ziv here," Rafael Levengrond explained.

Levengrond Yehezkel's family added it is inconceivable that a month had passed and the terrorist is still at large.

"I feel we are being made into fools," Ziv Hagbi's mother, Iris, said. "My son was murdered in cold blood, and (the state) is planning to demolish a floor and a half of the terrorist's house, instead of all of it. This is not deterrence. The whole house should be demolished and (the terrorist's) family should be expelled and receive no funds (from the Palestinian Authority)."

In reference to the manhunt after the terrorist, Ziv's mother said, "We don't know what's going on. The Shin Bet failed. A month prior to the terror attack, Naalwa wrote Facebook posts (implying he was about to carry out an attack), which were overlooked."

"Several accomplices were apprehended, but that did little to help. Had (the Shin Bet) operated as it should have, Ziv would still be alive," she went on to say.

Samaria Regional Council Chairman Yossi Dagan said that "handcuffing Kim was a pure act of barbarity. We join the victims' families to convey a clear message: the terrorists and his operators from the Palestinian Authority (PA) don't deserve to live. We are here to demand the government to instruct the IDF to carry out a retaliatory action against the PA."

"The terrorists are sent to drive us away from here, but they won't succeed. After this terror attack, the government should have established a new industrial area in the Samaria. We call on the prime minister to build an industrial park commemorating Kim and Ziv," he added.