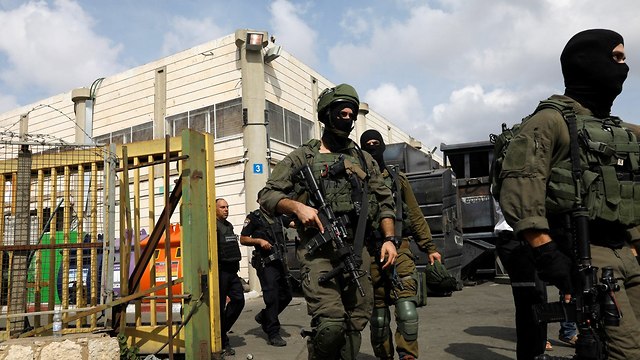 Barkan terrorist still at large, but his house will be demolished

Security forces continue their manhunt for Ashraf Na'alwam, who murdered Ziv Hagbi and Kim Levengrond Yehezkel in the Barkan industrial area last month; in an unusual move, the IDF issues demolition order for the terrorist's house, which will take effect in a few weeks.

Ashraf Na'alwa, who murdered Ziv Hagbi and Kim Levengrond Yehezkel in the Barkan industrial area last month is still at large but in an unusual move, IDF issued Monday a demolition order for the terrorist's house, which will take effect in a few weeks.

Three weeks ago, IDF officers informed Na'alwa's family that their house is set for demolition. The family was given the opportunity to file an objection.

IDF forces at the scene of the attack (Photo: Reuters)
In most cases, suspects' confession and recreation of crime are an integral part of demolitions' due process especially in the face of the High Court of Justice, where families of terrorists usually object the demolition of their homes.

In the Barkan case, Central Command chief, Maj. Gen. Nadav Padan decided to issue a demolition order despite the fact it will take effect in a few weeks at the very least— after completion of technical, engineering and legal processes—since the Shin Bet and IDF have sufficient incriminating evidence against the fugitive.

This is an irregular procedure, since a demolition order was issued before the terrorist is apprehended.

The order, which relates to the basement and the ground floor of the building in which the terrorist lived, was signed after the court dismissed Na'alwam family's objection.

To mark the 30-day anniversary of the terror attack, the families of the two victims will gather Tuesday at 6:00pm for a protest march.

The families are set to march through Shomron Regional Council and arrive at the site of the attack, the Alon recycling factory in the West Bank, where a rally will be held in memory of the victims.

"I want to cry out my brother's last cry, I do not want him to be forgotten," said Tal Hagbi, Ziv Hagbi's brother.

"I urge anyone who cares, anyone who wishes to prevent the next attack, anyone who wants to embrace the families, to come and march with us," said the head of Shomron Regional Council Yossi Dagan.

On the morning of the attack, the terrorist arrived at the factory, where he worked as an electrician, shortly after 7:30am. He hid a M-16 rifle under his clothes and apparently showed security his work permit.

Upon reaching the second floor, where the factory’s offices are located, Na’alwa started running towards one of the victims, Kim Levengrond Yehezkel—a secretary who was sitting behind a table at the end of the corridor.

It is believed that once the terrorist caught up to the secretary, he cuffed her and fatally shot her. IDF believes it is also possible that he had handcuffed Kim in order to stop her from calling for help.

The terrorist then started advancing towards the office of Ziv Hagbi—whom he subsequently shot dead as well. On his way out, the terrorist identified another employee, a 54-year-old woman, and fired in her direction, moderately wounding her.

The footage of the incident shows the terrorist escaping the factory by running down the stairs steps while holding his weapon and a backpack in hand.

Since then, security forces have continued their manhunt for Na'alwam.

The IDF and Shin Bet security services mapped his family's house, interrogated and arrested suspects for assisting the crime.

So far, no one has claimed responsibility for the attack, and so, from the point of view of the defense establishment, the suspect is being treated as a 'lone wolf' terrorist. To date, investigators found no association between the fugitive and various terrorist groups.