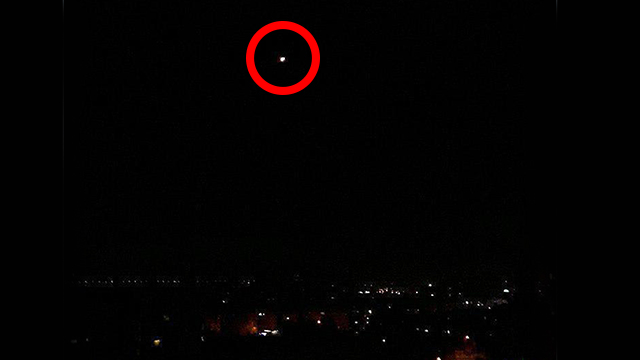 IDF confirms its air defenses were activated against missile launched from Syria; no damages or injuries reported; Syrian NGO says Iranian or Hezbollah arms deports were target of raid attributed to Israel.

Syria on Tuesday night accused Israel of launching a massive attack against targets in its territory, while the Israeli army confirmed its air defenses were triggered due to a missile launch from Syria.

The IDF spokesman said that "we activated the air defense systems against an anti-aircraft missile that was launched from Syuria. There was no damage or injury."

The IDF did not say whether its air defense system had brought down the missile launched in Syria.

The Syrian-state run SANA news agency said that "the air defense system was activated against missiles fired by Israeli war planes over Lebanese territory. We managed to shoot down most of the missiles before they hit their targets; three soldiers were wounded and damage was caused to an ammunitions depot."

This is the most extensive offensive attributed to Israel since the downing of a Russian plane in Latakia in September.

Earlier, SANA reported that "the attack was carried out from the skies over southern Lebanon and we brought down some of the enemy targets.

Ynet military analyst Ron Ben Yishai says that footage released by Syria clearly shows an Israeli missile being intercepted, which is why it was published.

As in previous reports of attacks in Syria, this attack is also connected to an Iranian plane.

'A yellow spot in the sky'

Residents in central Israel reported seeing a trail of smoke in the sky near Hadera apparently after the IDF air defense system went into effect. The trail was also seen in the north of the country. "We were sitting in the living room when the noise shook the entire house. We heard a launch and immediately went outside. It was flying fast, we saw a trail of smoke and a yellow spot in the sky. It's not the first time, it already happened twice since we've moved here a decade ago," said Sa'ar Pardi, a resident of Maor, a moshav in north-central Israel.

Last week, Prime Minister Benjamin Netanyahu said that Israel would escalate its fight against Iranian-aligned forces in Syria after the withdrawal of US troops from the country. “We will continue to aggressively act against Iran’s efforts to entrench in Syria. We do not intend to reduce our efforts. We will intensify them, and I know that we do so with the full support and backing of the United States.”

Earlier this month, Syria reported that air defense system had been used against enemy targets in Damascus. According to the report, the attack was carried out in the air space of Damascus airport. Not long after, the reports were removed.

The Foreign Ministry attributed the attack to "the direct result of the American policy of contempt for human values and the disrespect shown in the establishment of the coalition that attacked Deir al-Zour." It was the first time the Syrians had admitted an Israeli attack since the Russian plane crash in September.

In recent months there have been fewer reports of Israeli attacks in Syria, especially after the downing of the Russian aircraft.