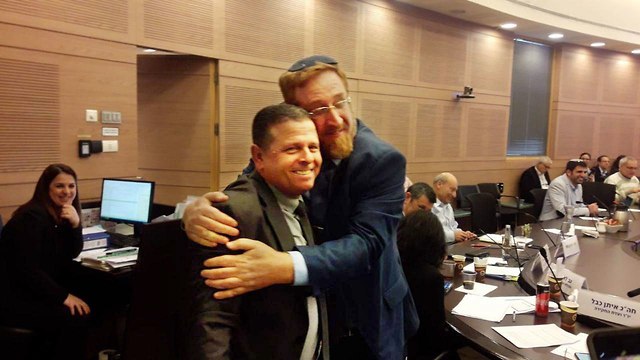 Who are Israel's busiest lawmakers?

Which MK passed the most laws? Who initiated legislation and who spent all their time in duty -free? As parliament goes into recess before the April elections, we take a look at the Knesset members who really shone

It all began on March 17, 2015, 120 excited Knesset members gathered in the plenum for its opening session, awaiting their swearings-in. On Wednesday, after 1,386 days of service, the 20th Knesset closed its doors and went into recess. Now, just a few months before election day, here are the MKs' certificates of achievement.

Knesset members have several functions, with the two main ones being legislating laws and supervising government's work. Legislative rules are clear: every MK can submit an unlimited number of bill proposals, but in order to pass them into law, bills must go through a lengthy political and legal process until they are approved on their second and third readings.

Across the aisle: Labor's Eitan Cable gets a hug from Yehuda Glick of Likud
The 20th Knesset's legislation record goes to MK Shuli Mualem of the recently launched New Right party (formerly a member of Jewish Home) with 13 bills that passed both second and third readings. In second place is MK Moshe Gafni (the United Torah Judaism faction) with 12 laws under his belt. In third place is MK Bezalel Smotrich (Jewish Hoem, again) with 11 laws.

It should be emphasized that many Knesset members sign onto their peers' bill proposals and are therfore listed as a bill's initiators. This list only includes the original drafters of the bills.

There is a political aspect to legislation, as it is much more difficult to pass laws if you're a member of the opposition. Therefore, when examining the opposition's legislative record, the numbers are slightly lower. The opposition member who passed the largest number of laws is MK Eitan Cabel (Labor) with seven laws under his belt. The second place is shared by three MKs: Merav Michaeli (Labor), MK Itzik Shmuli (Labor) and Michal Rozin (Meretz), with six laws each.

The number of laws each Knesset representative submitted was also assessed, but the result is inconclusive. On one hand, the number of laws submitted attest to the parliamentarian's motivation. On the other, some MKs submit hundreds of bill proposals that are eventually discarded. In this case as well, there's a discrepancy between coalition members and opposition members, as some members of the coalition submit bill proposals only as a declarative move.

To supervise government's work, parliamentarians can submit a parliamentary query to government ministers. There are three types of queries (regular, urgent and direct), and each MK can submit up to 80 queries per year. However, it turns out that many Knesset members don't make use of this opportunity and refrain from submitting these queries.

The MKs who submitted the largest number of queries are Mickey Levy (Yesh Atid) with 130 queries, Yousef Jabareen (Joint List) with 102 and Ahmad Tibi (Joint List) with 80. There's a gap between coalition and opposition members here as well: members of the opposition submit more parliamentary queries since, naturally, they have limited access to ministers.

Another aspect that was examined is the number of visits abroad.

During their terms, MKs do go on official trips abroad. Some go as members of an official Knesset delegation, organized by the Knesset Foreign Affairs Department, and some receive official invitations from foreign bodies.

According to Knesset regulations, the Ethics Committee must approve parliamentarians' trips abroad. Since these requests are public information, the data gathered is derived from the Ethics Committee. According to the committee, the Knesset member who spent the most number of days abroad was Tzipi Livni (Hatnua) with 128 days in total. In second place is Hanin Zoabi (Joint List) with 98 days and in third place is MK Sharren Haskel (Likud) who spent 97 days abroad.

Whether the next Knesset will prove to be as industrious remains to be seen.