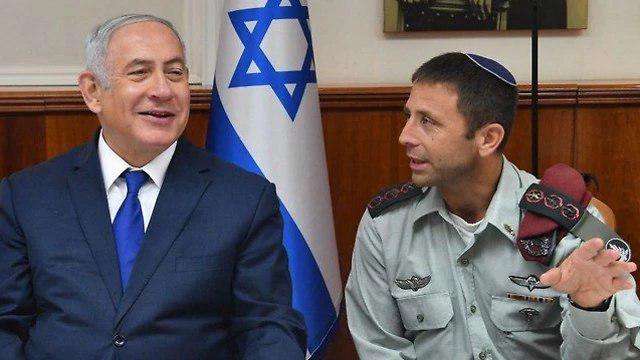 Brig. Gen. Avi Blot rapped for failing for pass on late-night order from Netanyahu; critics accuse PM of blaming Blot for his own failures

Prime Minister Benjamin Netanyahu's military secretary has been formally reprimanded for failing to pass on the order to stop last week's evacuation at the illegal outpost of Amona.

IDF Chief of Staff Gadi Eisenkot learned that Netanyahu called Brig. Gen. Avi Blot at 1am on Wednesday night, and ordered him to stop the evacuation set to take place just a few hours later on Thursday morning. But despite receiving a direct order from the prime minister, Blot only informed the IDF of the decision at 6am Thursday, when Border Police forces were already on their way to Amona.

Prime Minister Benjamin Netanyahu and his military secretary Brig. Gen. Avi Blot (Photo: Koby Gideon/GPO)
According to the IDF Spokesman's Office, the IDF chief stressed to Blot that he had erred in his handling of the situation by not informing the IDF of the prime minister's decision in real time. Blot told the IDF chief that he had made an error in judgment, and that he would draw the necessary conclusions from the incident. The brigadier general began his position in the Prime Minister's Office last August, after serving as the commander of the Oz special ops brigade.    He previously served as the commander of the Paratroopers Brigade's 101st Battalion and was wounded during Operation Cast Lead, which began in late 2008. He was then appointed the commander of the Maglan Special Forces unit and later the commander of the Hebron Brigade, before being put in charge of the Oz Brigade.

Shortly before his appointment as the prime minister's military secretary, Blot was reprimanded by the GOC Central Command, Maj. Gen. Nadav Padan, after classified documents were stolen from his car.

Israeli forces evacuate settlers from Amona (Photo: TPS)
The evacuation Thursday of the two illegal structures that settlers brought to Amona escalated into a violent confrontation with security forces, during which 23 police officers were hurt.

The some 300 settlers barricaded themselves in the two structures at the former outpost, which was evacuated less than two years ago under a court order. They returned to the outpost last month in protest of a recent outburst of Palestinian terror attacks, which claimed the lives of two soldiers and prematurely born baby.

Following criticism from the right, officials in the PMO said Netanyahu had asked his military secretary to stop the evacuation.

Jewish Home MK Bezalel Smotrich, who was at Amona during the evacuation, cast doubt on Netanyahu's story on Saturday night.

"At 6am, the evacuation hasn't started yet," Smotrich wrote on Twitter. "Police officers surrounded the structures but have not yet gone inside and have not started the evacuation of the people. If the IDF received the order to stand down and didn't stand down, someone needs be sent home. Blot's reprimand looks like a bad cover-up attempt."

MK Bezalel Smotrich in Amona during the evacuation (Photo: TPS)

Former defense minister Avigdor Lieberman (Yisrael Beytenu) also slammed Netanyahu for failing to support his military secretary, and accused him of trying to evade responsibility for the chaotic scenes at Amona.

"The prime minister's disgraceful attempt to put the blame for the evacuation of Amona on his military secretary, Brig. Gen. Avi Blot, is at the very least contemptible," Lieberman said.

"I cannot help but see this as an attempt to shirk responsibility and a desperate attempt to find a scapegoat. Brig. Gen. Blot's resume—which includes growing up in (the settlement of) Halamish, graduating from the pre-military prep school in Eli, and the sensitive role of the Hebron Brigade Commander, during which he received much appreciation from all of the residents—is a testimony to the kind of man he is and rules out any possibility of blaming him for the failures of the Amona evacuation. A disgrace!" Lieberman said.