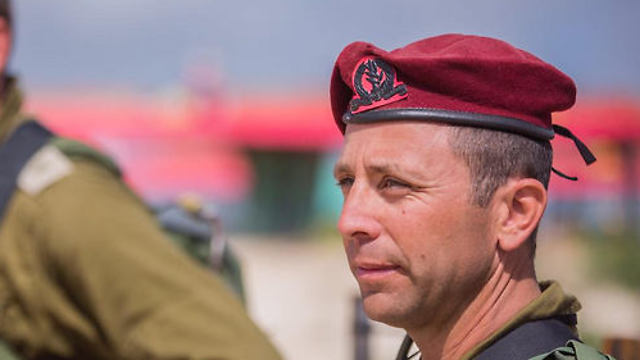 IDF and Shin Bet are investigating break-in to Col. Avi Blot's car and theft of documents, apparently with low classification; incident couldn't have come at a worse time for Blot, who is being considered by Netanyahu for the PM's military secretary position.

Military documents were stolen from Commando Brigade Commander Col. Avi Blot's car on Thursday during a trip for the brigade's commanders in the West Bank.

Military Police and the Shin Bet launched an investigation in an effort to locate the stolen documents. "Last week, the car of the commander of the commando brigade was broken into and his personal bag was stolen. The matter is under inquiry and a criminal investigation division probe was launched," the IDF said in a statement.

Col. Avi Blot (Photo: IDF Spokesman's Office)
Blot's car was in a parking garage while it was broken into, and it is believed the documents had low classification. The officer did take his weapon and encrypted communications device with him before leaving the car.

IDF procedures bar officers from keeping classified documents unsupervised in their cars, and the army is now checking whether Blot violated those orders.

Blot has been commanding the Oz Brigade, nicknamed the "Commando Brigade," for a little under a year.

The grave incident could hurt the officer's chances of promotion after having been summoned by Prime Minister Benjamin Netanyahu last week for an interview for the prime minister's military secretary position.

Blot is not the first officer to have had military documents stolen from him. Classified documents have been stolen from several senior IDF officers in recent years.

The most senior among these cases is former head of the military's Manpower Directorate, Maj. Gen. Hagai Topolanski, whose military laptop was stolen from his home. After an investigation into the incident found he failed to adhere to information security procedures, Topolanski resigned from the IDF.

In another case, classified material was stolen from an Armored Corps officer in the Northern Command, Col. Ilan Levi. The material was recovered, but Levy's military service was nevertheless cut short.

In yet another instance, then-GOC Northern Command suspended a senior officer after his encrypted communications device and classified documents were stolen from him.