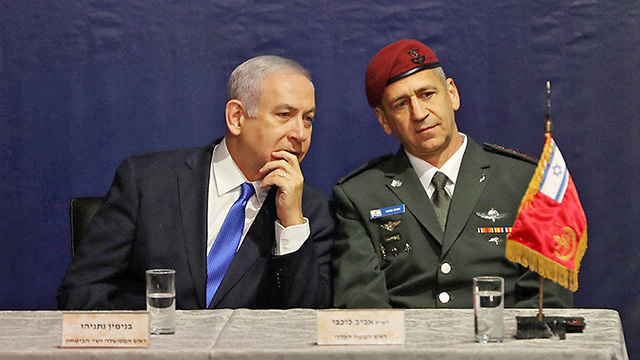 Netanyahu warns Iran to leave Syria 'as quickly as possible'

Prime Minister Netanyahu dismisses Tehran's claims that its officials are in the war-battered country only in an advisory capacity.

Prime Minister Benjamin Netanyahu said Tuesday that he would “advise” the Iranians to leave Syria “as quickly as possible” after an Iranian minister claimed Tehran only has anti-terrorms "advisors" in the war-battered country.

"I heard the statement made by Iran’s Foreign Ministry spokesman that they have no military presence in Syria, only advisors," Netanyahu said as he welcomed the new IDF chief Aviv Kochavi. "So I advise them to get out of there quickly, because we will continue our aggressive policy in the region as we’ve promised.”

Iranian Foreign Ministry Spokesman Bahram Qassemi rejected Netanyahu’s claims on Monday that Israel carried out “hundreds” of airstrikes against Iranian military targets in Syria,  saying "Israel's claims are baseless and false… it’s only an attempt by the Zionists to conceal their ongoing failures in the region." He insisted that the Iranian officials are in Syria in a strictly advisory capacity. "The Syrian government invited us in order to advise them on methods to fight terrorism."

Netanyahu on Tuesday said the main challenge the new chief of staff will have to face is Iran and its proxies in the region. "Over the past four years, we have dealt with great challenges: the changing fronts in Gaza, Syria, Lebanon and other places. But there has also been a main element facing us: Iran and its terror proxies. We acted responsibly and with discretion to stop those who seek to harm us from growing stronger," he said.

The prime minister added that Israel works constantly to expose the “lies” perpetrated by the Islamic Republic. “Iran lied about the nuclear deal, and we exposed it by unveiling its secret atomic archive,” said Netanyahu. “They’re lying now about supposedly launching an innocuous satellite into orbit, but they are actually testing the first stage of launching an intercontinental missile, contravening all existing agreements."